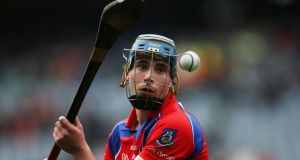 Conor Cooney: ‘We gave a poor account of ourselves in most of our matches. We just have to reflect on the year’s hurling and see if we can improve for next year’. Photograph: Cathal Noonan/Inpho

Even as the GAA managerial merry-go-round still spins less and less seats are available; Brian Cuthbert’s appointment in Cork, to replace Conor Counihan, filling the last of the high-profile football vacancies.

While Clare, Sligo, Longford, Fermanagh, Limerick and Antrim have still to secure their football managers for 2014, there are even less seats available in hurling, with only Offaly, Limerick and Waterford of the high-profile hurling counties still without a manager in place for next year.

Things in Galway remain uncertain: Anthony Cunningham is yet to be told for certain he’ll be back for 2014, and while all expectations are he will, Conor Cooney of All-Ireland club champions St Thomas’ sees no reason for further delay.

Cooney’s focus is now on Galway’s prospects for 2014, given St Thomas’ effectively surrendered their All-Ireland club title with last weekend’s county semi-final defeat to Portumna, who now go on play Loughrea in the final, and with that get a chance to represent Galway in the club championship.

Cooney was one of several St Thomas’ players brought straight back in to the Galway panel after their club success last March, and despite the ultimately disappointing season for Galway, he believes Cunningham is the man to take them through to 2014.

‘Review process’
“There’s a review process under way at the minute, so time will tell,” says Cooney. “If he (Cunningham) goes he will be a loss; he’s a great manager and a great guy so hopefully he will stick around.

“He knows the guys that are there. He’s probably going to bring in new guys for next year and maybe some guys will have to go. No one is safe. But Anthony has experience of everyone that’s there, is going to try to freshen things up and bring new things. So we’re just going to have to see what happens.”

What made Galway’s season that bit more frustrating was seeing Clare instantly transfer their underage success to the senior stage – which Galway just haven’t been able to do:

“Trying to translate that to senior is always difficult. Galway just haven’t found the key to it. Clare brought through so many under-21s, but we’re still a young team, we’re still learning and we’ll see what we can do.

“But Clare are a top team, they beat us in the quarter-finals and we never really got going. We gave a poor account of ourselves in most of our matches. We just have to reflect on the year’s hurling and see if we can improve for next year.”

No excuses
In the meantime Cooney makes no excuses for St Thomas’ exit in Galway: “It was a long road, tired minds, tired bodies from last year, but there can be no excuses. The best team won on the day.”

He’s also given his endorsement to the latest shake-up in the hurling league: “I think they need to find a balance between the competitive side of it and maybe allowing managers and players to try out things and experiment a small bit. Maybe a small bit of a jig up mightn’t be any harm.”

Meanwhile a team of GAA/GPA hurlers travel to the US this weekend to take part in the Celtic Champions Classic 11-a-side hurling tournament in the famous University of Notre Dame on Saturday.

The unique short-form of hurling - Super Hurling 11s - is designed to showcase the game to a new audience in the US, and with over 100,000 spectators due on the University campus for the Fighting Irish College football clash with arch-rivals USC Trojans, the GAA see it as a unique opportunity to promote hurling abroad.

The Munster panel, which will represent the University’s “Fighting Irish” and managed by Donal O’Grady and Tom Barry, is backboned by Limerick players with All Star nominees Tom Condon, Wayne McNamara, Gavin O’Mahony, James Ryan and Graeme Mulcahy.

The War of Independence 1920: A year of violence, trauma and terror