We’ve made a hygge mistake: why are we being sold such an Irish concept?

Unhealthy food, alcohol and sweeping stuff under the carpet – we invented that 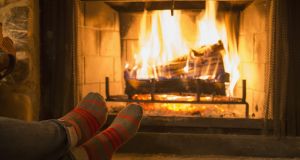 “Now, where did I put that glass of mulled wine?”

It was inevitable, I suppose.

After decades of being told how the French do everything so much better than the rest of us – raising kids, staying thin, wearing silk scarves, drinking responsibly, democracy, films, wedding cakes, and going on strike – this was the year we were supposed to bow to the innate superiority of the Scandinavian way of life.

Of course, everyone on the planet already knows Scandinavians are the richest, most progressive, most egalitarian, happiest and self-satisfied societies on earth. But until now, we’ve been able to content ourselves with the knowledge that they don’t seem to be having an awful lot of craic.

This Christmas, the publishing world – accompanied by the woollens industry – is doing its best to put paid to that theory.

Technically, ‘hygge’ – the lifestyle trend that has singlehandedly revived the scented candle industry – isn’t about craic. It’s more, if the books are to be believed (which they are not really, but more on that later), about knowing how to live like those families in the Ikea catalogue: eating pastries on a low-slung sofa while managing not to get any crumbs on your cashmere pullover.

Every article on the subject is required to start with a pronunciation guide, so here goes: buh’ll-shi-tuh. Apologies. It’s more like “hue-gah”. If it comes out like an inner city Dublin schoolchild describing the size of the Spire, you’re doing it wrong.

What hygge actually means is open to debate. It has been described as everything from lighting a candle with every meal, to putting your phone away and eating homemade cake while playing Scrabble instead, to knowing how to rock knitwear at a murder scene. Actually, that’s Sweden.

Anyway, if you want to learn more, you’re in luck: there are no fewer than 28 books on the market on the subject this year. There may even be more: I fell into a hot chocolate-induced stupor when I got that far. There are also hygge watches, hygge hammocks, hygge colouring books and, in something of an irony bypass, hygge phone covers. A college in London has even started teaching its students how to hygge.

But publishers may have overegged (with a sprinkling of nutmeg, wrapped up a toasty slanket and listening to old Eurovision hits, naturally) this one just a bit, because there is a simultaneous hygge backlash underway.

This is bad news for booksellers: it’s not even Christmas yet, and this is the concept that’s supposed to sell a million secret Santa gifts and fill stockings all over Europe. Yet here it is being lampooned in satirical books, memes on social media, and the subject of a handful of pieces investigating how hygge is not all it’s cracked up to be.

Social media, unsurprisingly, is finding much to be amused about in the trend.

The word 'hygge' is thought to originate from the contented feeling of bathing in the warm blood of slain enemies! #HyggeFacts pic.twitter.com/7D3vnKKR1O

In essence, #Hygge is about a group of slightly gloomy friends huddling under the duvet on a cold winter's night. https://t.co/M1OcQGES0M

A spoof piece in the Daily Mash entitled Hygge Is Byllshytte claims: “‘Hygge’, which translates as ‘blindingly obvious’, is a popular philosophy of enjoying nice stuff like cosy fires, eating food and warm winter socks in a smug, irritating way”.

A piece published in the Guardian on the ‘hygge conspiracy’ explores the anatomy of the trend. It describes how it started last autumn with a piece on the BBC website, which caught the eye of a number of publishers in search of a lifestyle concept that could be packaged up and sold to people who don’t normally buy books. And so the hygge craze was born.

The article quotes an author of one of the many resulting tomes, political scientist Meik Wiking who runs the Happiness Research Institute in Copenhagen. He admits his friends were amazed at the notion that he might be able to get an entire book out of hygge. In Denmark, it turns out, the concept is so ubiquitous as to be almost meaningless. Various forms of the word can be used as a greeting or to describe a certain kind of sexy (the buttoned-up kind). “Alcohol, sugar and fat… and handknitted socks” are the key ingredients, one contributor explained.

In the piece, the author Dorthe Nors describes hygge less indulgently as a “form of social control”. Discussing difficult subjects is definitely not ‘hyggelig’.

So there you have it: the secret of the hygge lifestyle is less about Instagram-friendly shots of millennials wrapping their hands around designer mugs, and more about over-indulgence in unhealthy food, alcohol and sweeping stuff under the carpet.

The very lifestyle, in other words, that we in Ireland actually invented.

I’ve got an idea for an aspirational lifestyle trend book for Christmas 2017. It’s going to be called The Craic: My Year of Feeling Damp While Calling Liveline To Moan About My Hangover.

I’m sure it’ll be a bestseller.