Edenderry in Co Offaly has one of the highest proportion of empty business units in the country, while Greystones in Co Wicklow has the lowest. Why does one town thrive while another suffers? 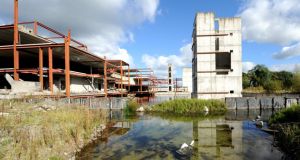 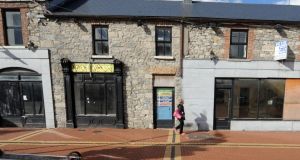 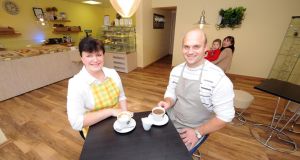 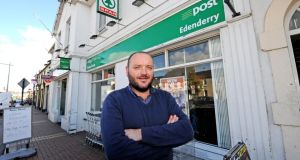 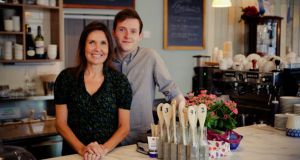 Caroline Gray and her son Robert at their new business, Cafe Gray, in Greystones, Co Wicklow 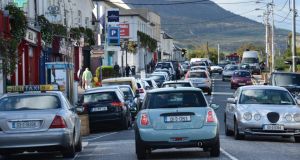 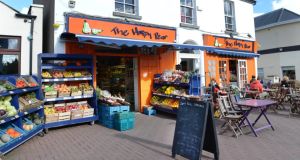 If there were tumbleweed in Co Offaly, it would be blowing up the main thoroughfare of Edenderry, the town from which Brian Cowen, the former taoiseach, apologised to the nation in August.

Cowen’s former running mate and ex-county council chairman, Gerard Killally, had begun to build a hotel in the town before he went bankrupt to the tune of €10 million. Killally was later given a suspended sentence for stealing from the court official assigned to manage his bankruptcy, and the hotel is now an abstract sculpture of concrete and steel pointing to the sky and surrounded by hoarding that warns, too late, of danger.

Edenderry once had one of the country’s widest market streets, large enough to corral cattle in. It is now a strangled cobble-locked artery lined with paid parking places. Elderly people and mothers with young children say it is too awkward to use. The scheme reduced the available spaces on the main street by two-thirds, while permission was given to build enormous shopping areas outside the town, a death warrant for the main street.

Locals say these planning decisions, combined with the recession and a lack of industry in the area, lie behind Edenderry’s commercial vacancy rate of 20.6 per cent, one of the highest in the country.

The proprietor of Spar, which contains the post office, is John Brady, whose family business goes back generations. He blames the “doughnut effect”, which is known in the US as the “Wal-Mart effect”. When you arrive in Edenderry from Dublin, you see three consecutive supermarkets: Lidl, Aldi and Tesco. Consumers drive from miles around to comparison-shop in the three, but few of them enter the town itself. At the other end of the main street, down a new road lined with shops that have never been occupied, is a partially occupied mall with a huge, fully stocked Dunnes Stores. On Thursday it was eerily empty.

Edenderry is a ghost town, according to Pat Larkin, a local publican and undertaker whose family business is 80 years old. This week he opened his refurbished lounge to let people know he’s not giving in, and in a gesture of community support he recently used his car park to erect a marquee for a sports-awards event, as there is no hotel in the town in which to hold even a wedding. Edenderry isn’t a ghost town because of a lack of committed businesspeople.

“The busiest place in town is the post office on Wednesdays and Thursdays, when people collect the dole,” says Lukasz Rusinkowski, the owner of Mazurek, a Polish food store that is three months old. Rusinkowski was made unemployed by the recession; tired of unemployment, he invested €10,000 in fitting out the shop. When he came to Edenderry, about a decade ago, it had no superstores. A petrol station and a Tesco anchored the main street.

When Tesco moved in
When Tesco moved to the outskirts, many local shops closed in its wake, says Brady. “If it wasn’t for the post office, I’d be closed, too. There used to be shops everywhere. The town is dead now. It’s all down to bad planning.”

Tony Mulvin, a local auctioneer, says the new commercial area was a mistake. “The impression is of funnelling cars through the main street down to the mall and the partially built hotel, like little sheep going to slaughter, and it’s not working. It backfired.”

Declan Leddin, a local Labour councillor, says it’s a decimated market town. “Many businesspeople saw this would happen but weren’t listened to. And not a single county councillor raised an objection. I was not a county councillor at the time, and was involved in making objections, but we were ignored.”

Yet Edenderry is a wonderful place for families, with sports facilities, good schools, several lovely estates and an exceptional community spirit, says Niamh Walsh, who opened Eden Deli in 2004 with her husband, Niall, an artisan baker. They’re going strong in a picturesque location by the canal.

Unemployment is high in the area, with a community of about 1,000 Polish and Lithuanian immigrants badly affected when the construction industry collapsed. In the hope of creating a sustainable business future for his two sons, who are 11 months and three years old, Aidas Eidukevicius, a Luas worker, and his wife, IIona Eidukeviciene, a baker, opened a cafe in the town this week. “My wife is following her dream,” he says. “Everyone in the community has tried to help us.”

The town needs industry to employ its young people so they can spend money in the town, says Leddin.

“Edenderry is full of potential,” says Larkin. With its canal walks, cycle paths, sports club, schools and other amenities, it could once again be a vibrant main street.

Greystones
Bordered by the Wicklow mountains and the sea, the main street of Greystones is packed at weekends with people browsing the eateries, and it bustles during the week. This family-friendly town still has an original sweet shop, a tiny pet shop with canaries in the window, and homely cafes.

Since the 1990s this traditionally Protestant enclave has been transformed from a quaint village, where majors and colonels presided over the little England that is the Burnaby, to a Notting Hill for Dublin commuters.

“I grew up here and just moved back with my wife and three children. This is the most amazing place to bring up kids,” says Eamon Foley, an auctioneer with the local branch of Sherry FitzGerald. “Compared with most other places I know, everything is on your doorstep.”

Greystones has the lowest commercial vacancy rate in the country: at 3.5 per cent, it’s a quarter of the national average. The main street has two unoccupied premises, but businesses are preparing to move into both. “It’s a buzzing and a happening place,” says Foley.

But planning in the town isn’t without controversy, and everyone you ask agrees on the issues: the stalled development at the harbour, which many never wanted in the first place; Charlesland, a brutally efficient steel and glass high-rise that looks out of place; the new Aldi, on its own near a sports-facilities greenbelt; and the shortage of new housing for growing families and retirees trading down.

As in many towns, everyone hates the paid parking, which is particularly onerous on Saturdays, when people suffer from clamper anxiety. Local people, new and old, feel a frustrated sense of entitlement to keep Greystones the way it is.

“The last people in are the first to object,” says Robin Archer, a builder, who grew up in Greystones and is the treasurer of the chamber of commerce. “I feel like saying to them, ‘If my father and I had objected, you wouldn’t be living here now.”

Eyesore
But most agree that the Charlesland development, on the fringe of the town, looks out of place. “It’s a bit of an eyesore, a concrete jungle,” says Archer’s wife, Robyn.

Her friend Leone Dooley agrees but points out that Eden Gate, where she has lived for four years in an apartment, has a healthy mix of houses and apartments, with both young children and older people, singles and couples, and is within walking and cycling distance of the town.

“I’m trying to get away from supermarkets,” says Dooley, who buys organic vegetables and meat in small local shops, which have endured despite competition from big chains. She says Greystones offers a new way of shopping: hunting for bargains on basics but spending a little more on quality in specialist shops.

Caroline Gray was “slammed with phenomenal goodwill” when she opened the vintage-themed Café Gray and bakery on the main street last month. She’s achieved the neighbourhood feel she wanted, and intends to start a local food movement, similar to that begun by Myrtle Allen and Ballymaloe, where Gray trained. “It’s not about making money. It’s about giving the town heart,” says the former actor, who is in business with her son Robert. “When the economy recovers, Greystones will get bigger,” she says.

The harbour development, zoned for housing but stalled as a result of the banking collapse, is an unresolved local issue. Discreet talks involving the developers and the chamber of commerce are aimed at diminishing the scale of the multistorey high-density housing development that was approved for the harbour even though 92 per cent of residents objected. Three acres of public parkland given to the developers in exchange for building the marina are also up for discussion.

Otherwise “the town is in great shape”, says the local Independent TD, Stephen Donnelly. “We’ve a low level of crime, a healthy environment, great schools and sporting facilities. We need a jobs initiative, such as a digital-related campus, and housing, but, with UK consultants, a committee of us has come up with a plan.”

With locals keeping a hawk eye on planning, and determined to become involved, Greystones stands a fair chance of expanding while keeping its heart.