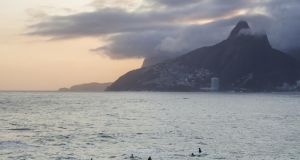 For decades, Rio de Janeiro has evoked a distant fantasyland of skimpy bathing suits and Carnival spectacle wedged between the sea and a riotous upheaval of tropical mountains. All this, under the outstretched arms of Christ the Redeemer, the sculpture with the most jaw-dropping view on Earth – if only soapstone jaws could drop. But the 2010s have given Rio a chance to add a cosmopolitan edge as host of last year’s World Cup and next year’s Summer Olympics, twice making it the centre of the world.

The new Rio is taking shape in fits and starts. The downtown port area is in the midst of an impressive overhaul of public works, exhumed historic sites and new museums. And with it, energy has been flowing towards more central, bustling neighbourhoods, away from the traditional South Zone destinations of Copacabana and Ipanema – though their beaches still give a party on the sand like no other. And with the Brazilian real weak at the moment, traditionally pricey Rio is still exuberant, but no longer exorbitant.

1. Art em Espanhol Rio once looked to Europe for high culture, as its crumbling downtown architecture and old photos of colonials in swelteringly inappropriate dress attest. But in 2013 Zurich-based Daros Latinamerica opened Casa Daros after a sumptuous restoration of a deteriorating but palatial 19th-century neo-Classical landmark. Since then it has filled the former orphanage (later a school) with artworks from across Latin America, a sharp break from Portuguese-speaking Brazil’s traditional cultural isolation from its Spanish-speaking neighbours. Admission, 14 reais, or €3.15.

2. Amazonian dive Over the past century, migrants from Brazil’s northeast have brought their cuisines with them, and steakhouses from the south have long since become a Rio staple. Tasting the Amazon is more elusive: Even the açaí smoothie craze brought an adulterated version – overly sweetened and iced – of the way the fruit is served in the rain forest. “That won’t do,” said a worker at Tacacá do Norte, which looks like just another Rio lunch counter, but is actually a patch of jungle in the city. There, açaí is served less sweet, and closer to a savoury pudding than a frosty beach treat. Paired with a pile of seasoned crab (22 reais) and mangaba juice (8.50 reais), which tastes a bit like pear, you’ve got a riverside dinner.

3. Centrally stationed Travellers have long based themselves in the southern beach districts, with occasional forays for night life in downtown Lapa, or up the hill in artsy Santa Teresa. But Rio’s fulcrum has been shifting towards downtown, and the previously ignored middle class neighbourhoods of Flamengo and Catete are right in the trajectory.

Start in Praça São Salvador, where the crowd is student-heavy and bad-beer vendors are abundant. (For a better selection, walk down the street to the Salvatore Café, an Argentine take-out that also has great empanadas (6 reais). Then it’s off to Mercado São Jose das Artes, 17th-century slave quarters that miraculously survived and has become home to bars where entertainment ranges from live music to televised local soccer.

4. Picnic with a view Head to the leafy Jardim Botánico neighbourhood and pick up baguettes, gougères, duck terrine, prosciutto and queijo canastra – a full-flavoured Brazilian cheese from Minas Gerais – at Casa Carandaí. Take your bounty in a quick cab ride to Parque Lage, which surrounds a Roman-style palazzo that houses Rio’s School of Visual Arts. More manicured than your average Brazilian park, Parque Lage also has art exhibits (in the school) and an artificial cave embedded with aquariums of Brazilian fish. From openings in the trees, Corcovado mountain springs into view at shockingly close range, seeming to pierce the sky led by Christ the Redeemer. You’re diagonally behind the statue, as if backstage at a concert, with an appropriately heavenly brunch spread.

5. Bike-ini You can’t visit Rio without gaping at the scene – not to mention the scenery – at Leblon, Ipanema and Copacabana beaches. Claim an orange bike-share bike at Bike Rio in Leblon (10 reais a month; register in advance with a Brazilian cellphone, available via cheap SIM card) and head down the famed beachfront promenade to observe or participate around Posto 9. Take a break for gelato at Vero, or slurp coconut water at a beach kiosk. Grab a new bike, and drop it off at Arpoador Beach, then walk out onto the rock formation to admire the crescent beach and the mountain known as the Dois Irmãos. With bike number three, loop around to Copacabana and a view of Sugarloaf Mountain.

6. Colonial sardines You can’t get any more old-school in Brazil than a Portuguese bar. Portugal, of course, colonized Brazil, and even after independence, Portuguese immigrants continued to come in waves – the latest after the recent global economic crisis. At Adega Pérola, a casually classy bar with high ceilings, workers dish out appetisers tapas-style from behind the bar. Sardines, salt cod, lamb sausage (the sausage: sliced, heated and doused in onions, garlic, parsley and tomato) are good choices (average price, 25 reais) and go well with a Brazilian microbrew, a category that barely existed a decade ago and is a welcome anachronism in a place where it could otherwise be 1975.

7. Under construction Rio’s port area had long deteriorated into a grungy, dangerous place, when the huge Porto Maravilha or Marvellous Port renewal project began. It’s behind schedule, but you can walk around the works to see some highlights: the MAR (the Rio Art Museum, admission 8 reais) has exhibits bursting with Brazilian talent and colour; the Calatrava-designed Museum of Tomorrow is due to open on an overhauled pier later this year. Among the attractions of an African heritage circuit is the recently unearthed Valongo Wharf, where African slaves arrived in the 19th century.

8. Haute cuisine A top-flight meal with high-end service can be an elusive combination in Rio. Eureka! Now there is Térèze, within the steeply sloped grounds of the Hotel Santa Teresa.

The elegant dining room offers peek-a-boo glimpses of the twinkling city, and the cuisine is international but laced with Brazilian touches. A meaty lobster comes alongside the traditional fish stew called muqueca (or moqueca), transformed into risotto; an “escondidinho,” the heavy shepherd’s pie-like dish, becomes almost dainty with codfish and mashed baroa potato replacing dried beef and manioc.

The ambience seems to call for wine, but please – only after trying the cashew fruit and lime caipirinha. Dinner with drinks is about 250 reais per person.

9. Full dance card The Lapa area is loaded with party opportunities, but in addition to the standbys, there are other options: Estudantina Musical, a (very) old-fashioned, cavernous spot in an ancient building on Praça Tiradentes just outside Lapa, where ballroom-style dancing is the norm and age is not a factor. Go early. A very different spot is La Paz, a pulsing three-story Lapa scene where DJs spin diverse genres, and age is informally restricted to those who don’t mind arriving at 1am – and waiting in line.

10. Two for one Rio’s improbable layout, lodged between lush mountains and monoliths of granite jutting from the sea can be viewed from either of the city’s two biggest tourist attractions: Sugarloaf mountain or Corcovado mountain, home to Christ the Redeemer.

However, you can splurge and see both by air. Helisight’s 12-minute ride (which costs 560 per person ) leaves from its Sugarloaf location and zooms over the crescent beaches and skyscrapers and around Corcovado.

11. Alt-beach Most of Rio’s urban beaches are stunning, but urban.

For a fabulous beach scene without the hotel-studded backdrop or pale tourists, catch the ferry across the bay to Niteroí (a separate city) and use the 99 Taxi app to get a cab to Itacoatiara Beach, where another rocky backdrop makes it feel 100 miles outside of town – except, how did all these people get here?

For truer isolation, take another taxi down an isolated dirt road to Taberna do Darwin, a charming restaurant, if you can call a chef serving two dishes a day to a dozen diners on a porch a restaurant. You do need a reservation, but it’s clearly chef Márcio Sabino’s home.

One weekend (it’s open only on weekends, cash only) he was offering steak frites or plantain gnocchi in shrimp sauce; both choices came with a view of big blue butterflies flitting by and lizards the size of baby alligators slithering up the hill. Lunch is about 100 reais per person.