There’s more to this city than fabulous architecture, culture, design and cuisine 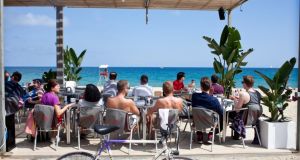 A view of the water from La Mar Bella beach. Lourdes Segade 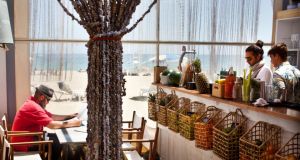 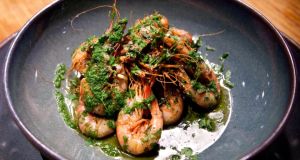 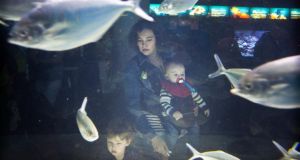 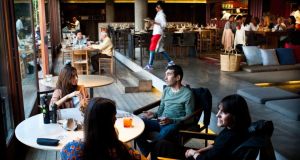 So many travel articles extolling the cultural and gastronomic attractions of Barcelona close with something along the lines of: “And you have the beach right there.” But that is usually the last you hear about the city’s nearly 5km stretch of sand and gently lapping waves.

Granted, as beach cities go, it would be hard for any Mediterranean city to spawn the type of beach culture one finds in places like Sydney, Los Angeles or Rio de Janeiro. Instead of the Girl from Ipanema, Barcelona has a statue of Carmen Amaya, a beloved flamenco singer and dancer born in 1913, in the shantytown that gave its name to the city’s once polluted and now pristine Somorrostro beach.

In the years since its shoreline was cleaned up for the 1992 Summer Olympics, Barcelona has become a glamorous seaside cultural mecca for the savvy globe-trotter. The city also developed a reputation as a gay destination on par with Ibiza or Mykonos, and this summer Atlantis Cruises offers a 10-day voyage (from August 2nd) that starts and finishes in Barcelona, leaving passengers back in the city for the final crescendo of the international gay and lesbian Circuit Festival.

Obviously no one is suggesting a visit to Barcelona that excludes all the fabulous architecture, culture, design and cuisine this world-class city has to offer. But with 10 city beaches – some equipped with wifi, outdoor gyms, rentable lounge chairs, clean bathrooms, showers, restaurants and municipal sailing and windsurfing stations – you might as well add a little beach activity to your visit.

6pm
1 Go cruising
Get out on the open water with one of the several companies that offer harbour and coastal tours – from easy, breezy buy-a-ticket-and-get-on-the-next-boat tours to sunset jazz cruises you can book ahead online. Most tours are 40 to 90 minutes, but nearly all depart from the harbour directly in front of the statue of Columbus, at the spot where the Rambla meets the port. Two tour companies – Las Golondrinas and Orsom – have the most daily departures, with adult fares from €15 to €20 for a 90-minute tour.

9pm
2 Crispy rice
Barely a year old, Barraca, the popular beachfront arrocería of the chef Xavier Pellicer’s, is a paella-lover’s paradise. Book a table upstairs where the shimmering blue Mediterranean fills the huge windows. Start off with red prawns sautéed with garlic and parsley, or a bomba, a traditional deep-fried potato croquette filled with savoury beef. Vegetarian paella is usually an also-ran, but here the kitchen gives organic artichokes, red peppers, asparagus, broad beans and caramelised onion the same loving treatment as the tender chunks of lobster in its most expensive risotto-like dish. Most paellas have a two-person minimum. Dinner for two, €80.

Midnight
3 Into the night
Though it faces the port and not the sea, Zahara cocktail lounge still exudes the vibe of a beach-town bar with a casual South Beach-in-the-1990s mix of gay, straight, international clientele that makes it a safe bet to start out and see where the night might lead, or a place to wind down with a cocktail on the terrace. Caipirinhas, a house speciality, are €6.

10am
4 Fuel up
With its casually mismatched tile floor and whitewashed furniture, the narrow bar at Beach House, at the edge of the Sant Miquel beach, is piled high with fruit for juices and smoothies. It also serves simple breakfast fare, such as muesli, croissants and pan tumaca, a Catalan specialty of toasted bread rubbed with garlic and fresh tomato, with a drizzle of olive oil – top it with succulent slices of ham or devoured on its own. Breakfast for two, €20.

11am
5 Stay dry underwater
For history buffs, those travelling with children or anyone hoping to get out of the sun for a spell, there are worthwhile city attractions clustered around the old port.

Start with the city aquarium (€20 for adults), which takes only 30-45 minutes to visit and requires little effort as you stand on a conveyor belt that winds through glass tunnels beneath stingrays and sharks swirling in the waters above.

Across the Passeig de Colom is the Museu Maritim (€12, which includes this summer’s Viking exhibition), situated in the old royal shipyards. Parts of the building dates from the 15th century, with stunning stone and wood vaulted architecture that is almost as engaging as the ships and seafaring paraphernalia sheltered within it.

As you make your way back toward the beach, step aboard the Santa Eulalia, a 47m, three-masted schooner built in 1918, moored in the harbour; a self-guided visit is included in the price of the Museu Maritim (or €1 on its own).

1pm
6 Merchant marine
Over the centuries Catalans have developed a penchant for the decorative arts. Items such as sweet-faced ceramic dogs, jewel-tone glass and little silver platters with kooky enamel ornaments appear in quantity at flea markets like the Fira Brocanters, which takes place on Saturdays and Sundays in the port.

Nearby, in La Barceloneta, you can improve your Castilian or Catalan vocabulary by picking up a potboiler to read on the beach at Negra y Criminal, the city’s mystery-only bookshop.

As thoughts turn to lunch, stop for a beer or glass of rosado and a plate of pescaito frito – tiny fried sardines eaten whole and by the handful – at Jai-Ca, one of the few places in La Barceloneta where it almost feels as though locals outnumber tourists.

3pm
7 Global beach food
Xiringuito Escribà, on Bogatell Beach, north of the Olympic Port, always ranks among the city’s top seafront dining establishments for simple grilled summer fare – a xiringuito (or chiringuito) is a restaurant on the beach.

Last summer, Escribà opened a second, smaller beach shack, La Guingueta, right down on the sand, which was an immediate hit with locals.

Mix-and-match a tapas lunch of grilled razor clams, tangy lime and cilantro ceviche; tender octopus dusted with pimentón; and some of the best guacamole this side of the Atlantic. Lunch for two with wine, €80. 6pm 8 Beach by any other name Hotel concierges and the city’s tourism board describe the neighbouring beach, known as La Mar Bella, as the perfect spot for a young “cosmopolitan crowd from all walks of life”, including “naturists”, tourism code for a gay beach.

When you tire of staring at the sea or the buffed and polished crowd, there are two outdoor gyms and a small skate park nearby. As day turns to evening, cocktails and sangria (€18 for a pitcher) replace protein shakes (€5.50).

9.30pm
9 Sailfish
Run by Tragaluz, the Barcelona restaurant group that sets the standard for stylish dining in the city, the beachside restaurant Pez Vela has a groovy vibe and a multilevel diningroom for people-watching. If you’re riced out, try the burger or an unexpectedly delicious salad of artichokes, celery, tomatoes and ribbons of a buttery manchego cheese. Dinner for two with drinks, €100.

Upon arrival, ask the hostess if you can be added to the door list at Eclipse Bar, upstairs at the W Hotel. If she declines, develop a relationship with your waiter and ask again. Otherwise when dinner wraps at about midnight, tough out the line for the lift to the 26th-floor bar where the city celebrates some of its biggest parties, overlooking the endless Mediterranean horizon.

9.30am
10 Paddle for Pilates
Who says you have to choose just one morning workout? At the far end of Sant Sebastià beach, Pukas Surf School offers ocean Pilates classes (individual classes, €52; groups of four to six, €23 per person) that combine the benefits of both stand-up paddle and Pilates workouts on the water with the Barcelona skyline as backdrop. The school also offers surfing classes, which can be purchased individually or in packs of multiple lessons.

Noon
11 Village charmers
Locals, who tend to dismiss the charms of their city beaches, will tell you the real luxury of living in Barcelona is easy access to charming little beach towns like Sitges, 35 to 45 minutes away by train, bus or taxi. But a more stylish way to arrive might be by private sailboat. Depending on the season, Vell-Marí offers half-day (€370) and full-day (€560) excursions that let you cruise the coast and alight at the cove of your choice. Of course, Sitges in high summer, when it’s teeming with what seems like most of gay Europe, might not feel like such a small town after all.