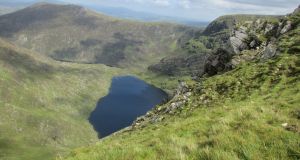 August Bank Holiday in Killarney and the place is chock-a-block. Queues are ubiquitous and a monumental traffic snarl-up snakes out to Muckross. Happy to escape the mayhem, I divert on to the tranquil Lough Guitane road and am immediately

in a different world. Just a couple of miles from the bedlam of Killarney, it’s startlingly lonesome moorland, which nowhere betrays the slightest influence of a human hand.

From my parking place it’s up a sometimes fern-smothered track that rises at a sympathetic angle towards an unpoetic bulk giving little hint of the subtleties ahead. Once thought Ireland’s highest, this mountain can still lay claim to be the bulkiest as its austere shoulders sprawl in all directions like a huge melting ice-cream.

Mangerton guards its secrets jealously and so my ascent weaves pleasantly but mundanely upwards through a mountainside replete with the happy colours of summer. Once the site of a great battle, where the McCarthy clan halted the Norman advance into Kerry, it is today a peaceful place offering distracting vistas over Killarney’s lakes, the bosomy twin summits of Torc Mountain and, beyond, the angular peaks of MacGillycuddy’s Reeks.

Arriving at the outfall stream from the Devil’s Punch Bowl lake, I am reminded of an old fable that here a demon, in the course of an altercation with a local chieftain named O’Donoghue, ripped away part of the mountain and flung it to create an island in Muckross Lake. Devil’s Island exists, but unfortunately for myth lovers the Punch Bowl is actually a glaciated coum, albeit a magnificent one. This means I have a sweeping views while ascending its southern cliffs to gain the green expanse of a high plateau.

Continuing roughly southeast over boggy terrain, it’s a short flog to Mangerton’s summit. Topped by a small communication pole, this spot is the highest point in Killarney National Park. An exquisite prospect unfolds over Kenmare Bay, Kilgarvan valley and the West Cork mountains beyond.

Saving the best wine for last, I strike out almost due north to reach cliffs above the col lying east of the Punch Bowl. Now I have a first glimpse of the declivities that tumble vertiginously into Glenacappul, the queen of Kerry’s glaciated valleys. For a time I stand transfixed above its 300-metre cliffs and marvel at the stupendous forces required to carve out such an abyss. Below are the still waters of Lough Erhogh reflecting a sapphire sky.

I drag myself away and begin the rather steep descent to the col. Then it is along the north shore of the Punch Bowl to rejoin my route of ascent, while feeling assured I have enjoyed one of the most rewarding excursions of the renowned Killarney outback.