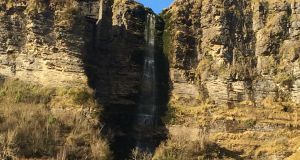 It’s a ‘spate’ river, so it’s best to visit after (or even during) a downpour on a wild Atlantic day of south-westerly gales; the waterfall then can appear to ‘smoke’

Poetry and good descriptive prose can wonderfully enrich one’s perception of the natural beauty of a place – making it much more than just a visual experience. Indeed, a good poet or writer can bring the magic of a real or imagined place to his/her reader, without her/him ever having to put on the boots and get all muddy and cold.

And nowhere on our beautiful island is that more true than in Sligo and Leitrim. Here Yeats has impregnated a visually beautiful landscape with a spirit of magic, wonder and mystery.

Glencar is a case in point. It’s waterfall, “where the wandering water gushes from the hills above Glencar”, attracts visitors by the thousand; however, that beautiful verse of the poem The Stolen Child takes the reader/visitor high into the hills above the waterfall to meet mischievous fairies, tiny pools and stars, weeping ferns, trout and “unquiet” dreams; and, having carried the reader/visitor into this imaginative and magic space, Yeats (via the Fairies) seduces us (the “human child”) to come and stay.

And few of us can deny sometimes feeling that pull to escape into his “waters and the wild” – though perhaps not with a dodgy kidnapping fairy!

Glencar waterfall in Co Leitrim is more than worth a visit; but one’s imagination can be crowded out by coffee shops and neat lawns and paths and facilities. About a kilometre west, however, is another less well-known waterfall, called “the Devil’s Chimney” – despite the name more suited to quiet contemplation, though without the help of a caffeine injection.

Officially, it’s Ireland’s highest waterfall – in Irish, “Sruth in Agaidh an Aird” (the stream against the height). It is accessed via a new woodland path that climbs 120m up the talus slope above Glencar Lake. The walk is short but very rewarding. Its “feel” is of quiet deep woods and wide vistas, wild flowers, birdsong and glimpses of beautiful Glencar Lake.

It’s over private land, access being kindly granted by the landowner and has been put in place jointly by the counties of Sligo, Cavan, Leitrim and Fermanagh under the EU-funded Border Project. The roadside CP has an information panel which sets out clearly the geology, flora and fauna of the place while another warns you that this “is NOT Glencar Waterfall”.

I’ve been there in late spring and have loved it, despite the waterfall being in a quiet mood. It’s a “spate” river, so it’s best to visit after (or even during) a downpour on a wild Atlantic day of south-westerly gales; the waterfall then can appear to “smoke” – be blown back into the sky and recycled over and over again – and you’ll understand why perhaps it got its name!

There are seats to sit on and woods and space to shelter you, and give permission to the child in you, or with you, to be “stolen” for a while in this lovely place.