Walk for the Weekend: Easy walk around Durrow Castle 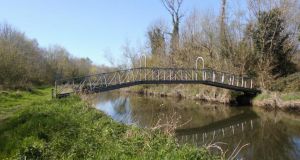 In Rambles in Eirinn, his popular 1902 account of traversing Ireland, William Bulfin described Durrow as “a gem in the basin of the Nore”. An attractive 17th century village, drawing sustenance from rich agricultural hinterlands, Durrow has recovered much of this former charm since gridlock traffic was redirected to the M8. A visit is again an appealing prospect, and this has drawn me to complete one of two expansive looped walks that combine to describe a perfect 360-degree circuit of this Georgian-era settlement.

By the attractive village green, Rural Recreation Officer Ann Lanigan introduces me to local man Noel Mooney, who is leading a group on the Leafy Loop walk. Thirty of us set out along neat streets that have achieved a measure of notoriety from a sublimely innovative Scarecrow Festival. Occurring annually in July, its unlikely stars are 100 original, rag-tag characters, representing all aspects of Irish life.

Initially, our route weaves insouciantly up Ballagh Hill before swinging right and tagging a woodland path of convenience to a forest clearance. Here, we encounter signs for the MacGiolla Phadraig Way. The Fitzpatrick clan is still strongly associated with Laois, Mooney explains, and this 17km trail leads to Cullahill Castle. Now a forlorn ruin, it was a great Fitzpatrick stronghold until it was sacked by Cromwellian forces in 1646.

Soon it’s a question of putting one foot jauntily in front of the other and letting the landscape do the talking. Through dim avenues canopied by sylvan arches of green, we reach the busy R639. Crossing with care, it’s into Durrow Demesne at a gate lodge.

Mooney tells us this area was once the Ashbrook Estate of the aristocratic Flower family, who laid out the village of Durrow in the early 17th century. Locally, it is referred to as Bishop’s Wood because in penal times a Catholic bishop was executed by a tree that survives in the forest.

Woodland paths now handrail us gently to the banks of the Arkina River and a greeting from several friendly fishermen plying their soothing passion. Hugging the now dusk-laden riverbank conveys us downstream to a metal bridge from which Tipperary man Tom Ryan immediately serenades us with a recital of Slievenamon.

Not to be outdone, Donegal woman Antoinette Ruth responds with the Homes of Donegal. Standing in the gathering twilight, it’s a magic moment and further proof that our most indelible memories generally arise from impromptu, unforeseen happenings.

Under the watchful eye of a crested moon, we enter the grounds of Castle Durrow. This expansive Palladian mansion with formal gardens represents a delightful legacy from the ascendancy period of Irish history and was regarded as the height of opulence when completed in 1716. Mooney describes it as one of the finest examples in Ireland from the early 17th century that still remains almost identical to its original design.

Castle Durrow is now a premier venue for stylish weddings, and we are immediately reminded of this when we encounter elegant guests enjoying a stroll along its tree-lined avenues. Later, over tea and sandwiches in the comfortable surroundings of the Castle Arms Hotel, a consensus emerges that the Leafy Loop wins for unchallenging terrain, varied landscape and abundant resonances from a colourful history.