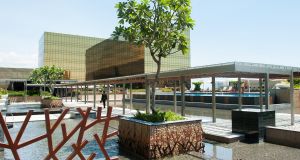 For two weeks from January 23rd, Venice dons a mask and cloaks itself in the veil of mystery that is Carnevale, the world’s most elegant pre-lenten celebration. It’s an expensive city at the best of times; here are five places to stay worth every euro...

Al Ponte Mocenigo (Fondamenta Rimpetto Mocenigo 2063, Santa Croce; alpontemocenigo.com; rooms from €85) You won’t find a better bargain so close to the Grand Canal, just metres from the San Stae vaporetto stop. What you get is high wood-beamed ceilings and four-poster beds in handsome rooms overlooking the canal or an elegant courtyard.

B&B Corte Vecchia (Rio Terà San Vio 462; cortevecchia.net; rooms from €60) Just a short walk from the Peggy Guggenheim Museum is this three-room home given the contemporary architect’s touch. The furnishings are coolly elegant; the decor a mix of modern and vintage.

Venissa (Fondamenta Santa Caterina 3, Mazzorbo; venissa.it; rooms from €95) Scandinavian chic is the style at this winery, in one of the city’s last remaining walled vegetable gardens. The food is sublime – so much so that it attracts renowned chefs who run periodic classes.

A hotel owned by Robert De Niro has been named the world’s worst luxury hotel for 2015. According to high-end travel-rating company Luxury Travel Intelligence, Manila’s Nobu Hotel is a “great disappointment” and suffers from “poor management” despite charging a minimum of €150 a night for a basic room and €350 for a suite. TripAdvisor reviews echoed the negativity, with repeated complaints about the service. The Oscar-winning De Niro joined forces with Michelin-starred chef Matsuhisa Nobu in the venture that began with the opening of Nobu Las Vegas in 2013, but their star pedigree may not be enough to guarantee success in opening eight more luxury properties in the next two years. The winner of LTI’s poll for 2015 was the Mandarin Oriental in Marrakech, followed by the Sant Francesc in Palma, Mallorca.

Visitors to Pompeii have six freshly restored sites to explore, including the luxury home of a merchant, a middle-class house and a laundry. Ongoing labour disputes and a lack of maintenance funds have plagued the Unesco World Heritage Site in recent years, resulting in key sites being closed to the general public. The ancient town, destroyed by volcanic ash after the explosion of nearby Vesuvius in AD 79, gets about three million visitors a year. The easiest way to visit is using the Circumvesuviana suburban railway (€3.20) from Naples; admission costs €11, or you can use the three-day ArteCard (€21; campaniartecard.it) that allows free entry into three sites and 50 per cent off the fourth.

It’s the most anticipated theme park opening of 2016, but for Disneyland California to make room for the new Star Wars Land, it has to close huge parts of Frontierland. From tomorrow, Big Thunder Ranch, Big Thunder Ranch Barbecue and the petting zoo will close, but the park’s best rollercoaster – Big Thunder Railroad – will remain open. Temporary closures include Fantasmic, the Mark Twain Riverboat, the Sailing Ship Columbia, the Disneyland Railroad, the Davy Crockett Explorer Canoes and the Pirates Layer on Tom Sawyer Island. The resulting 14-acre expansion is the biggest in the park’s history; no date has been announced for the opening but it’s expected during the summer.

It’s the ultimate Vegas indulgence: the chance to drive a supercar without worrying about speed limits or traffic.

SpeedVegas is a new purpose-built track where you can get behind the wheel of a Ferrari, Lamborghini or a range of other high-performance cars (Porsches, Shelby GTs, Audis and Corvettes) and let them rip.

Longueville House (longuevillehouse.ie) in Co Cork has a B&B overnight including afternoon tea and late checkout from €95 per person sharing, valid until February 6th.

Coopershill House (coopershill.com) in Co Sligo has a two-night B&B deal from €239 per person sharing which includes a four-course dinner; the offer is valid throughout 2016