Travel Writer, Morocco: “Not only was my destination unusual, but so would be my mode of transportation”

Glen Vince defies doubts on his voyage from Europe to Africa 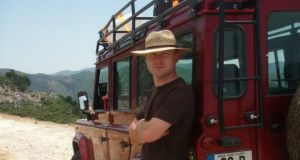 “ Many things let us down on our travels: timetables, fuel costs, Moroccan customs, Graham’s stomach, but the mule wasn’t one of them.”

“You’ll never make it there.” Not the most common of sentences associated with the introduction of your planned holiday, but so many times was it said on the eve of this particular trip, that the challenge was set. In the days of yore, and I mean before there were even trains, travelling was done quite frequently by animal. The sturdy horse, for example, if properly cared for, could go for miles. So, not only was my destination unusual, but so would be my mode of transportation. Land Rover; the modern day equivalent of a horse, in my humble opinion, and just as reliable, so long as you cared for it properly. It was in Africa and I wanted my Land Rover, a brand long associated with the continent through British colonization, to set foot, sorry, tyre on that soil.

And so the journey began in a rainy Ireland, travelling from Dublin to Wexford and then taking the ferry from Rosslare, to Fishguard in Wales, where it was also raining. The mule then took us to Porthsmouth from where we would then take an eighteen hour voyage to Santander in Northern Spain. My friend Graham came along for the ride, assuming, along with everyone else, that my mule would become sick and I would need moral support. However, my mule was performing splendidly so far, and the only sign of anything breaking down was Graham’s stomach on the rough sea crossing, as pleasant as I found it.

There be land. And so we arrived in a, wait for it, rainy Santander. The rain in Spain falls mainly in Santander, because the further away from it we got, the drier, and hotter, it got. Graham suffered terribly from heat exhaustion, and I just about got a wonderful photograph of him spewing at the side of a dusty road. There was no spewing from the mule, though. On she went. Central Spain was arid and dusty and beautiful. We refuelled in a petrol station that I could only compare to something you would see along one of those straight desert roads in America, except instead of a buck toothed, dungaree wearing local, we were greeted by an olive skinned Spanish beauty with a personality to match, and whom was very happy to fill our tank, no innuendos please, and pose for a photograph. We assumed she was local, because she spoke no English and we spoke no Spanish.

And so began a thirteen hour non-stop drive before we, not the mule, finally burnt out and we had to stop and sleep for the night. The mule became our bed for the night, me in the front and Graham in the back, and our only other companions were the stars . . . and a non-stop barking dog and roaring juggernauts and high pitched motorbikes. But we slept. The next morning we woke unrefreshed and the mule hee-hawed to life and brought us up and over the mountains into Estipona on the Costa Del Sol within a matter of hours.

We rested for a day at a friend’s apartment before heading to Tarifa to catch a ferry to Tangier in Morocco. The ferry crossing was quick, Graham was sick and on arrival in Morocco, things came to a halt. A beautiful sunny day in a beautiful country did not cover up for our unpleasant treatment at the ferry port, but we remained strong and diligent and defiant, and after driving not ten minutes up the road after our ordeal, we decided Morocco wasn’t for us, and so turned back and waited for the next ferry back to Spain. ’Leaving so soon?’ we were asked. Yes, we replied. We have no more money to spend on our trip, so we had to turn back. They were again unpleasant, but second time round we were even more defiant, so we at least left Morocco with our pride in place and jubilant in the knowledge that we had managed to get the mule to the African continent, as was our mission.

We spent the next few days on the Costa Del Sol doing the tourist thing, and Graham was sick again, although this time it was from excessive alcohol consumption. We finally packed up the mule again after our respite, but would she start up after sitting idle for a few days? Yup, she sure did. We did everything in reverse on the way home and the mule never missed a beat. Many things let us down on our travels: timetables, fuel costs, Moroccan customs, Graham’s stomach, but the mule wasn’t one of them.

Oh, and did I mention, eighty people bet me €10 each that the mule would not make the 3,500 mile journey without breaking down? A chosen charity was grateful for the €800.

Vamos, amigos! This was a different class of language trip

Fed up with the school trips on offer, Catherine Mack seeks out a Spanish learning holiday with a difference for her son

HOLIDAY DISASTERS: Classics student SARA KEATING was with a friend in a felucca on the Nile when her runs to the riverbank reeds…