Plus take a spin over Brighton beach, free admissions inBerlin and the US, and Valentine’s breaks at home 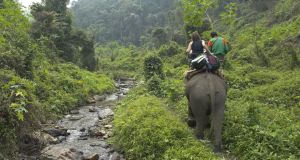 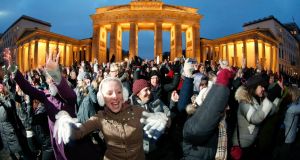 People dance to the theme song of the “One Billion Rising” campaign in front of the Brandenburg Gate in Berlin February 14, 2013. One Billion Rising is a global coordinated campaign aimed to call for an end to violence against women and girls, according to its organisers. REUTERS/Fabrizio Bensch (GERMANY - Tags: SOCIETY)

Fancy a business-class upgrade – but naming your own price? More than 30 airlines – including Aer Lingus, Etihad and Lufthansa – have signed up to a programme operated by Plusgrade (plusgrade.com) whereby passengers are invited to bid on available upgrades.

Passengers get an email telling them they can bid for a better seat or they can find out from the airline’s own website if their flight is eligible. They then enter a bid price and their credit card information and find out whether their bid is successful, usually within 72 hours of departure. Most participant airlines also have a “strength meter” to gauge the realism of the bid: should you require additional information, you can get it on flier forums such as flyertalk.com.

Another programme, operated by optiontown.com, offers passengers discounted upgrades at fixed prices: it currently has only 12 partner airlines, although these include SAS.

Monday is Burns Night, when Scotland celebrates the anniversary of its most famous poet with haggis, whisky and recitals of his poetry in special suppers throughout the country.

Here are five sites associated with the “ploughman poet”:

Burns House, Dumfries (Burns St; dumgal.gov.uk; admission free). Fans have turned the house where he spent the last years of his life – he died in 1796 aged just 37 – into a place of pilgrimage. They come to see the study where he wrote his best-known poems (the desk and chair are original) and examine original manuscripts as well as the famous Kilmarnock and Edinburgh editions of his work.

Ellisland Farm, Dumfries (ellislandfarm.co.uk; admission £4). When Burns first moved to Dumfries in 1788, he rented this farm six miles northwest of town. It’s now a museum with some original features. It’s just off the A76 to Kilmarnock.

Globe Inn, Dumfries (globeinndumfries.co.uk). This traditional pub is reputed to have been Burns’s favourite ‘howff’ – several of his love affairs began here. There’s a stool that seemingly was his favoured one, but if you sit in it you’ll have to recite a verse or two.

Robert Burns Birthplace Museum, Alloway (burnsmuseum.org.uk; admission £8.50). This excellent museum has plenty of Burns memorabilia, including a pair of pistols that were important to his work as a tax collector.

The guides are excellent and full of funny anecdotes, which is very much in keeping with the poet’s own sense of humour.

Writers’ Museum, Edinburgh (Lady Stair’s Close, Lawnmarket; edinburghmuseums.org.uk; admission free). There’s a whole room devoted to Burns in this museum, housed in the Lady Stair’s House from 1622. The other main exhibits are devoted to Scott and Stevenson, the other two of Scotland’s trio of literary giants.

Berlin’s parliament has voted to offer free entry to all the city’s attractions on January 31st as a gesture of thanks to the city’s residents for their part in the biggest refugee relief drive since the second World War.

More than 70,000 refugees have been accommodated in the German capital in 2015, but the chronically broke city-state has been criticised for the chaotic manner in which it has dealt with the influx of asylum-seekers: Spiegel Online called Berlin the Capital of Failure, and the head of the city’s main refugee registration centre was forced to resign in December amid accusations of incompetence.

A SPIN ON BRIGHTON TOWER

Gift vouchers are now on sale for Brighton’s newest attraction, the i360. When it opens this summer, this 161m-high needle will be the world’s tallest moving observation tower and its first vertical cable car. Visitors will glide to an observation platform 137 metres up in the sky, from which there’ll be bird’s-eye views of the south coast for up to 42km in either direction, from Bexhill-on-Sea to Chichester. The viewing pod is 10 times larger than those of the London Eye and can fit up to 200 people at a time. At the base of the tower will be a cafe, brasserie, tea rooms, shop and a children’s play zone. “Flights” start at £15 (£7.50 for children); britishairwaysi360.com

LAND OF THE FREE

With St Valentine’s Day close by, Inchydoney Island Lodge & Spa (inchydoneyisland.com) in Co Cork has a two-night B&B deal over Valentine’s weekend including afternoon tea, dinner, a starlight kayaking trip and spa treatments for two, from €359 per person sharing.

The Twelve (thetwelvehotel.ie) in Barna has a B&B Lovebomb package in a suite with 12 added elements such as bubbly, a picnic, dinner and in-room spa treatments, from €470 per couple.

For an activities-based Valentine’s, Delphi Resort (delphiresort.com) is the spot: after a day’s walking, there’s a five-course meal at the Chef’s Table. Packages start at €149 per couple.

EAT Huen Phen (112 Th Ratchamankha; mains around THB 120). Specialising in the spicy cuisine of the north, this restaurant is a treat.

SEE Elephant Nature Park (1 Th Ratchamankha; elephantnaturepark.org; Half-day tour THB 2,500/5,800). No unethical rides or silly circus shows, but interaction with elephants and their mahouts at this sanctuary for rescued animals.