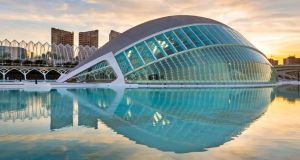 Five museums in Berlin
August 29 is the Long Night of Museums in the German capital, when more than 100 cultural institutions keep their doors open until 2am with artistic performances and concerts to accompany the showcase of their wares. Tickets cost €18; you can buy them online at lange-nacht-der-museen.de. In the meantime, here’s five museums worth exploring:

Deutsches Technikmuseum (Trebbiner Strasse 9; sdtb.de) A marvellous paeon to technology, this museum is where you’ll find the world’s first computer, a huge room full of vintage cars and a candy bomber – the plane used during the 1948 Berlin Airlift.Next door is a science centre where kids can get interactive.

Holocaust Memorial (Cora-Berliner-Strasse 1; stiftung-denkmal.de) Walking through Peter Eisenman’s 2711 concrete columns is a profoundly moving experience, but a visit to the underground information centre, where the horror of the Holocaust is explored through the fate of individual families, is unforgettable. Be sure to take an audioguide.

Jüdisches Museum (Lindenstrasse 9-14; jmberlin.de) Daniel Libeskind’s landmark creation is home to this extraordinary museum that chronicles – in all its glorious and painful detail – the history of Jewish life in Germany since the Middle Ages.

Museum in der Kulturbrauerei (Knaackstrasse 97; hdg.de/berlin/museum-in-der- kulturbrauerei) Life in East Germany is the theme of this relatively new museum, which juxtaposes the ambitions of the socialist state with the sobering reality of life in the GDR. A series of case studies make the experience more tangible.

Neues Museum (Bodestrasse 1-3; smb.museum) Nefertiti’s bust is the show-stopper at this superb museum of antiquities, packed with mummies, sarcophagi and a range of archaeological finds from ancient Troy. There’s also a 3,000-year-old hat made out of gold called the Berliner Goldhut.

Car hire in Europe
Portugal has come out top of a survey ranking Europe’s most expensive countries in which to hire a car. The UK Post Office’s annual Car Rental Report found the average cost of a week’s rental for a mid-sized saloon in Faro during peak season was €786 (including a full tank, an additional driver and a sat nav), compared to the €484 across the border in Malaga.

Future on in-flight entertainment
United Airlines has launched a pilot programme that explores the possibility of replacing seatback screens with handheld tablets. From last week, passengers on two long-haul routes could rent 8.4-inch Samsung Galaxy Tab S devices loaded with over 100 hours of movies, TV programmes and other in-flight entertainment.

For now, the tablets are only available on flights on the mainland-to-Hawaii and Hawaii-to-Guam routes, but the airline industry will keep a close eye on how well it fares, as getting rid of in-built entertainment systems will make planes lighter and therefore more fuel efficient.

This which in turn could mean cheaper air fares.

United is considering expanding the programme to other routes by the end of the year.

Your bill, Mr Shankly
Just in time for the new season, Liverpool has a new football-themed hotel. Named after Bill Shankly, one of the city’s most revered football managers, and co-managed by members of his family, the 86-room Shankly Hotel opens today with rooms themed after the iconic Scot, who managed Liverpool FC between 1959 and 1974, turning the club into a dominant powerhouse.

The 86 rooms include 60 Shankly-themed bedrooms, some of which are big enough to sleep 10 – perfect for visiting groups of fans in town for a match. The ground floor has a museum dedicated to Shankly, while the roof will have a bar and infinity pool (both due to open in early 2016). The hotel is in the newly refurbished Millennium House (60 Victoria St). See shanklyhotel.com

Super palms
Next time you’re in Dubai, take a look at the date palms on the beach, for they might be one of the emirate’s new breed of “smart palms” – six-metre-high artificial trees that will charge your phone, provide high-speed wifi and let you touch-browse the net. The solar-powered, state-of-the-art palms have been installed on the beaches at Zabeel Park and around the Burj al-Arab, but there are plans to install up to 103 more throughout the city.

Get away at home
Trump Doonbeg (trumphotels.com) in Co Clare has a “Summer at the Ocean” B&B package for €215 per night in a Classic Links bedroom. The Slieve Russell Hotel (slieverussell.ie) in Ballyconnell, Co Cavan, has a “Country Escape” package of two nights’ B&B and one dinner for €159 per person sharing, valid weekends until the end of the month. The Malton (themalton.com) in Killarney also has a two night weekend special, including a four-course dinner, from €225 per person, valid until the end of September.