Travel Writer: Brendan Butler tries to uncover what happened to a people and a civilisation 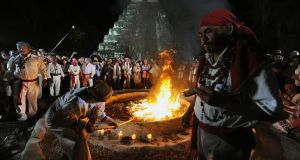 Mayan shamans take part in a ceremony celebrating the end of the Mayan cycle known as Bak’tun 13 and the start of the Maya new age, at the Tikal archaeological site, Guatemala. Photograph: Johan Ordonez/AFP/Getty Images

Tikal, in the north of Guatemala in Central America, is a relatively newly discovered wonder of the ancient world, 90 per cent of which still remains to be revealed. Tikal is to Guatemala what the Pyramids are to Egypt – they are both national symbols of their respective countries.

The nine-hour drive north from Guatemala city to Tikal in a pickup truck was an ordeal, the potholed roads reminiscent of Irish roads pre-Celtic tiger days .

The ruins of the Mayan city are now part of the Tikal National Park, situated within the one-million-hectare Mayan Biosphere Reserve created in 1990 to protect this valuable cultural area from further degradation mainly due to illegal logging and the slash and burn agricultural practices of the area.

It was early afternoon with the heat intensifying as we began our guided tour .

We were glad of our guide’s expertise as we passed many a lost traveller in the rain forest.

What is extraordinary about Tikal is that it was abandoned around the end of the 10th century. For the next millennium it was reclaimed by the jungle until it was rediscovered in the 19th century by prospectors looking for gum trees; chewing gum was becoming popular in the US . Subsequently, archaeologists from Guatemala, Europe and the US began to excavate the area and in 1979 it was declared an Unesco world heritage site.

What was striking were the gigantic hardwood trees. Among the cedar and mahogany were the majestic Ceiba Pentander Kapok trees – some reaching 70 metres in height – which are sacred to the Mayan people.

Tikal is located in a swampy area, but there are no rivers .When the Mayan people settled in Tikal about 900 BC they had to depend on rainfall and eight giant underground water cisterns have been excavated so far.

Before we reached the central pyramid and plaza area the sound of howler monkeys pierced the air. For such a small animal the emit is powerful and frightening howl . Many species of exotic birds, such as toucans and parrots exist in the forest, but the sighting of jaguars or cougars are rare due to illegal hunting

Entering the central plaza area is a truly spectacular sight. At its eastern end stands the Temple of the Jaguar, which rises to 50metres high while at the other end stands the equally high and impressive Temple of the Masks. In between there is a vast expanse of palaces and buildings to be explored.

As with the ancient Egyptians the pyramids were used by the Mayans as tombs for their dead leaders. Human sacrifice was carried out on the many sacrificial altars . Young female adults chosen for their beauty were ceremoniously sacrificed to their gods as offerings of propitiation.

While we were in the area we saw Mayan people celebrating their ancient rituals . They have not forgotten their Mayan religious heritage in spite of five hundred years of Catholicism.

A month later, I still wonder how an entire people of maybe 100,000 at its peak abandoned their city some 500 years before the Spanish conquistadors under Cortés would pass through the area.. Theories abound; most agree it was a complex combination of wars ,famine, overpopulation and resource depletion.

Maybe with further archaeological research in the coming years we might come nearer to solving the mystery of Tikal.

Entries to The Irish Times Travel Writer competition, in association with Travel Department, are now closed. The winning writer will be announced on October 29th. See irishtimes.com/travelwriter