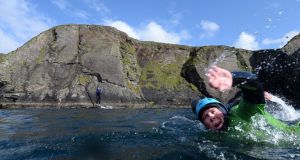 No. 2 Jump into the Atlantic with Wavesweeper Sea Adventures

Erris, in northwest Co Mayo – stretching from the Céide Fields to Mulrany, and incorporating Ballycroy National Park and the Mullet peninsula – was named the Best Place to Go Wild in Ireland in a 2014 competition.
1 Spend a day on the deserted island of Inis Gé Theas – now an internationally important home to bird life and other fauna and flora. To watch whales or puffins, hire a licensed boat. A guide is recommended.
2 Jump into the Atlantic with Wavesweeper Sea Adventures, or learn to surf with Uisce, a water-sports centre that teaches activities through Irish.
3 To learn about the history, heritage and culture of the Erris region – about St Brendan the Navigator, Brian Rua Carabine’s prophecies, and the island of Inis Gluaire – visit Áras Inis Gluaire or Ionad Deirbhile.
4 Catch and cook your own dinner. With more than 30 varieties of fish known to inhabit the seas, lakes and rivers of Erris, the region is a fisherman’s fancy. For lunch, a guide can help you forage for seaweed and shellfish.
5 Hike the Bangor Trail, an ancient route through the Nephin Beg mountains and Ballycroy National Park.
6 Play golf at Carne Golf Links, which “now has 27 of the most dramatic, natural duneland holes in the world”.
7 Cycle around Erris, making a pitstop at all four lighthouses: Blacksod, Ballyglass, Eagle Island and Blackrock.
8 At Ionad Deirbhile Heritage Centre find out about James Hack Tuke’s assisted emigration scheme in 1882-4, when more than 3,000 people emigrated on steamships from Blacksod Bay to Boston and Quebec.
9 Or go back even further in history, at the Neolithic Céide Fields.
10 Discover picnic areas with clifftop views, an unspoilt secret cove or a pristine Blue Flag beach. Use the Erris Beo app ( app.errisbeo.ie) to guide you.