Dublin’s Temple Bar is one of the world’s most disappointing tourist destinations, according to the Huffington Post. We asked some visitors to the area what they thought. Video: Bryan O'Brien 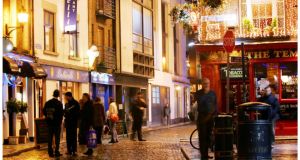 An article urges visitors to avoid Temple Bar and its drunken tourists ‘at all costs’.

The Temple Bar area of Dublin has been dismissed by a high-profile international website as one of the world’s most disappointing tourist destinations.

The Huffington Post site advises visitors to avoid the area “at all costs”.

In a list of the 10 most disappointing destinations in the world, Temple Bar is described as “a prime example of the rampant fleecing of drunken tourists.” The supposedly “authentic” bars are little more than “overpriced tourist traps” that cater to visitors “competing to see how drunk they can get”, it adds.

Although it trashes Temple Bar, the website is kinder to the rest of Dublin, praising its “gorgeous architecture” and green spaces. And if tourists are looking for a nice pub, they can find one “literally anywhere else in Dublin”.

In the 1980s Temple Bar was earmarked as the location for a large bus terminus, but the proposals were dropped and plans to transform the area into a cultural quarter were launched in a spirit of optimism and renewal.

Opinion about the Huffington Post ’s verdict was divided on the streets.

Standing outside one of the pubs, Rob Lennon from Liverpool said he wouldn’t come to Dublin without visiting the area. “It’s what you think of. I always think of Dublin as the cobbled streets and the live music everywhere with Guinness.”

His girlfriend, Emma Cook, from Belfast, agreed. The city “wouldn’t have the same charm” without Temple Bar, she said.

But Ana Vallés from Alacante in Spain said she had expected more. “In Spain we have loads of things like this and they’re kind of cooler,” she said, adding that you walk through Temple Bar and “you don’t realise it”.

On the claim that the area is a rip-off, she said: “I haven’t had a pint there because it’s more expensive than anywhere else”.