Prosecco is a moveable feast in the Veneto 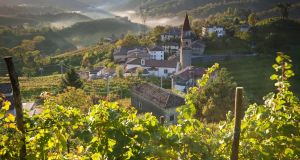 ‘This is the path to happiness. The way to pleasure!” says a passer-by, pointing to his mouth. He waves his flute at me. “La Nostre Vie. Our way!” We continue on ours.

Prosecco is like a pet. Or a grandmother. It’s not just for Christmas. It’s for the whole year.

Every summer, one hour north of Venice, Combai in the heart of “Prosecco land” holds its Sbecotando, or Prosecco-thon. Committed hedonists process through the hills, chestnut woods and steep vineyards above town, stopping every mile to re-fuel and refresh themselves with enormous amounts of chilled sparkling wine and regional finger food.

It’s an exercise in gluttony, geography, gastronomy, and viticulture. An education in all things Italian. The Italians like to take on liquids. On the winery tours, you get all the quality assurance stuff, the riddling and raisining spiel, the residual sugar waffle, the narcoleptic cryo-fermentation autoclave tank guff and get talked through the secondary “Charmat” method in lengthy, neuralgic detail.

An Italian Sbecotando (Venetian for nibbling while you walk) is not so dry.

A gentleman in roomy shorts aims an aria at me. “Versa il vino! Pour the wine! Eccelented Marzemino!” He swallows his flute and explains. “Mozart mentions our Marzemino in Don Giovanni.”

The moveable feast continues. We walk on uphill, building up a thirst which is slaked half an hour on.

“Fancy some quiet?” asks a young man in a straw trilby. He pours me a glass of Verdiso into my goto tasting glass, hung around my neck. Then he offers me a sliver of creamy Castellata cheese, praising the digestibility of its microbial population.

Next stop, Boro Colmellere, a medieval farmhouse complete with outside bread oven. “Welcome to land of joyous bubbles,” says another young man in another boater at the next filling station.

He pours me a piccolo, or small one. I have three. Plus egg and anchovy crostini. Next up and down are cicchetti of tomato and salami. And more sparkling stuff.

The two-mile Combai Sbecotando started seven years ago. The waiters in the woods are volunteers promoting the culture and lifestyle of the Marca Treviso.

At the Colle Ronc viewpoint , I am handed a glass of ombra (one for the shade). We look out over the hay barns towards the pre-Alps. My host tops me up. And, having reminded me that Prosecco is named after a town near Trieste, he says. “Good Prosecco is good for hypertension. This wine is guaranteed good. It’s from my field. Hand-harvested. Straight from the garden of Venice.”

The Prosecco Road is Italy’s oldest wine route, 60km long. It connects you with 120 wine producers, like Andrea Miotto in Vittorio Veneto. He graduated from the world’s oldest wine school in Conegliano, which was founded in 1876.

“Prosecco is often mislabelled,” says Miotto, who studied winemaking in New Zealand. “People think that as an easy-drinking wine, Prosecco must be a minor wine. A cheap Champagne alternative. It isn’t respected. People believe being popular, it can’t be good. Drunk so young it can’t be old, but it is. Some families have worked with the glera grape here since 1600.”

Restaurants worth trying include Elena and Piero’s Locanda Marinelli, near Valdobbiadene, and the Casa a Giorgio in Conegliano, where I receive unusual pairing tips from owner Giorgio’s son.

Expecting advice on what to have with the fatty entrées and marbled cheeses, Marco turns up the ambient music and says: “Eat snails with Sting. Bee Gees with rabbit. Beer with pizza. And Prosecco with everything!”

Prosecco’s success is global. Some 79 million bottles are produced in the region every year. And 47 per cent of total production is exported. The UK/Ireland market is second behind Germany in the European consumption table. There is no drought.

From May to August, the Prosecco region hosts 16 weekend wine shows and al fresco barbecues, allowing you to meet the producers and connoisseurs. And generally talk a lot of bocciline, or “bubbles”.

“There are many Proseccos. But only one Prosecco,” says the lady behind the counter, pouring me another glass, this time into a big, pulled stem, flavour-enhancing glass. “To Prosecco. The place and the elixir,” she toasts.