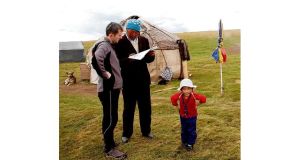 On the map: Diarmuid asks for directions during the Cunniffes' journey across Asia LONG AND WINDING ROAD Anna and Diarmuid Cunniffe on their bespoke bicycles 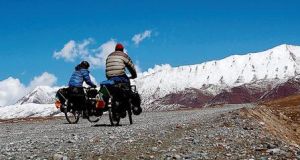 On the map: Diarmuid asks for directions during the Cunniffes' journey across Asia LONG AND WINDING ROAD Anna and Diarmuid Cunniffe on their bespoke bicycles

ANNA CUNNIFFEand her husband, Diarmuid, set off on a honeymoon with a difference, cycling eastwards from Ukraine towards Mongolia, through countries that had, for them, been just a black hole on the map. First of all, though, they had to build their bikes

‘WHO’S STAN?” I asked when my husband, Diarmuid, first asked if I fancied cycling the Stans. I know now. Six months ago we packed our panniers and set off on our travels. Battling head down, against icy winds, to the top of a 4,000m pass in Tajikistan, Kyrgyzstan or Kazakhstan – lungs rasping, sweat pumping – has become a frequent event in my new life. With nothing around us but a fiercely wild and barren landscape, the going can get tough. Cycling side by side, we urge each other on, eager for the almighty reward that lies ahead: a Snickers at the top.

The idea for the trip came to us in 2008 as we were preparing for our wedding. We had an opportunity to take a career break, and we decided it was the perfect opportunity for an extended honeymoon. We were both keen to travel slowly, getting to know people and cultures along the way. Travelling by bicycle made sense.

We knew our commuter bikes wouldn’t be up to the challenge, so we bought two sturdy steel frames and built our dream bicycles bit by bit. After many months of labour in our backyard Diarmuid delivered two healthy baby bikes into the world, weighing in at 15kg each.

We wanted to visit some less-explored countries. Cycling east from the edge of Europe seemed like a good plan, to take in Ukraine, Russia and Mongolia, among others. We were interested in the former Soviet Union, particularly the countries of Central Asia, which to us were simply a black hole on the map. Diarmuid had been diligently studying Russian for two years before we left, and he was eager to put his skills to use. They proved an invaluable asset, allowing us to interact meaningfully with people we met along the way.

We kicked off with a few sunny weeks of pedalling the Ukrainian peninsula of Crimea and the Black Sea coast of Russia before arriving in Tashkent, the capital of Uzbekistan, where our summer in the Stans began.

We cycled south to Samarkand and were instantly in love with this mystical Silk Road city of majestic turquoise domes and deep-blue mosaics, our senses endlessly aroused by its exotic bazaar, which sold golden apricots, sticky dates, red-hot chillies and sulphur- yellow spices.

After overheating while crossing the Kyzyl Kum desert in 50-degree heat, the ancient city of Bukhara was a welcome oasis. This city of minarets and madrasas was once considered so holy that light was said to ascend from the city to the heavens. We spent a few glorious days refreshing and refuelling under the shade of fig and lemon trees in the courtyard of one of its famed BBs.

Cycling between towns, we felt like celebrities, as people ran down streets after us to take photographs and offer help. Cars stopped abruptly in the middle of roads and slices of juicy watermelon were handed out. Locals approached us in cafes and invited us into their homes, where they fed, watered and put us up for the night. Even Uzbekistan’s notorious policemen were amazingly helpful and considerate, offering us pink ice creams to help cool down on one particular scorcher.

We crossed into Tajikistan on a swelteringly hot day and met Buchar, a nut-brown man who waved us into his shop and invited us to stay for a week. We settled for one night. As we wobbled off on our bikes, bellies full of plov, or pilaf, the next day, he whispered in our ears: “One day you’ll come back, my friends. I’ll be looking out for you.” Overwhelmed by the kindness of strangers, we fought back tears.

The Pamir Highway, from Khorog, in Tajikistan, to Osh, 750km away in Kyrgyzstan, was next on our itinerary. Many have dubbed a journey along this silent high-altitude route, which is dotted with remote villages, the last great road trip. We were rewarded for making it to the top of mountain passes not only with a Snickers but also with the sight of stunning emerald-green lakes and memorable encounters with the wonderfully hospitable and colourful Pamiri people.

After a few weeks of mountain living we descended to Osh, exhausted, filthy and gaunt. Elated that we had made it, we drank Moldovan wine with other cycle tourers we had met and danced on the street in celebration.

From Osh we headed for the lake district of Kyrgyzstan, exploring the mystical Lake Song Kol, where we spent a night in a yurt, drank fermented mare’s milk – an acquired taste – and helped dogs round up sheep.

We pedalled on to the shores of the impressive Issyk-Kul, the world’s second-biggest mountain lake, and set up camp. Along the way we enjoyed more Kyrgyz hospitality, a few roasting-hot banyasto soothe our weary limbs and the most delicious tartly sweet blackcurrant jam.

Once we’d had our fill we ventured back to Russia, this time bound for the Altai Republic. Rich autumnal colours of gold, orange and purple browns filled our every view like a tapestry. We were mesmerised.

Our route along Chuysky Trakt was one of the most enjoyable legs we had. After feasting on fish from the mighty Katun river, an appearance on the evening news and a night of vodka with a truck driver named Victor, we crossed the border into Mongolia to find that winter had arrived.

Its landscape was like nothing we had seen. The sense of vastness, of nothingness, of emptiness is unique. I was thrown off my bicycle several times by the wind, and we spent whole days pushing and cursing our bikes up sandy passes. When the wind dies down, however, the silence that surrounds you is overwhelming. During these rare moments we stood together, in awe and wonder of where we found ourselves.

Stumbling along an icy track in plummeting temperatures and zero visibility one evening, we were guided to the safety of a ger, as yurts are known here, by a lone horseman. Stranded by a snowstorm, we spent a few memorable days in the tent with a nomadic family, drinking salty tea and swapping bike rides for horse rides.

The Land of No Fences is remote and magical. Nestled in our ger one evening we watched a beautiful sunset, alone on a vast grassy plain, surrounded only by gentle mountains. We left Mongolia with yak-wool socks and memories that will remain with us forever.

After six months and more than 5,000km we have come to realise that this trip is far more than a physical journey. Already we have learned so much. Our faith in humankind has reached new levels: the hospitality we have received, the friends we have made and the joy we have experienced have taught us some valuable lessons for life.

The journey of our relationship as husband and wife is also developing. There have been moments when we have been scared, times we have been lonely and, frequently, days when we have been exhausted. Yet being together in this adventure has made the dark moments slightly brighter. Collapsed on the road, doubled over in pain with a bout of sudden intestinal illness one day, I roared laughing. Diarmuid, doing his best to distract me from my parasitic horror, danced a ridiculous dance while singing I Will Survive.

We have come to realise that to have such an opportunity and to experience so much so early on in our marriage is truly a gift.

Putting together a trip

If you’d prefer someone else to do all the organising, various agencies will plan a full trip for you. Biketoursdirect. com lists tours in a number of European countries.

If the Silk Road cities of Uzbekizstan take your fancy, Afsona Travel (samarkand-bukhara-travel.com) has tours to suit any itinerary.

Selena Travel (selenatravel.com) is a Mongolia-based tour firm with a variety of packages.

Anna and Diarmuid Cunniffe are currently in Siberia. Their blog, at crazyguyonabike.com/doc/ridingeast, includes a section on assembling their bikes

The unsolved mystery of Peter Bergmann
7

Paul Flynn: Three delicious dishes you can bank on this weekend
8