For parents with theme park fatigue, Legoland Windsor is a revelation 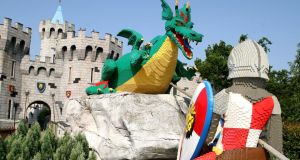 Kinghts’ Kingdom at Legoland Windsor, which is set over 150 acres. Photograph: Stewart Turkington 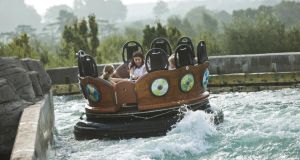 Viking River Splash: there are family dryers outside the splash rides where everyone can hop into a booth and jets of hot air dry you. Photograph: Mikael Buck

Here’s a tip. If you are thinking of bringing your kids to Legoland Windsor, make sure you plan it well. It’s probably not a good idea to arrive over there at the height of summer unless you are prepared to spend a small fortune on Q-Bot passes that fast track you past the interminable queues for almost every ride.

My advice to anyone on a budget is to go there in low season, early in the week when English children are in school and the park is quiet. If you go in peak season, rain is your friend because it cuts the queues in half and you are going to get soaked anyway if you go on the splash rides.

Hopefully this hasn’t put you off because for someone who usually endures theme parks, Legoland was a bit of a revelation. It has a friendly, laid back atmosphere and doesn’t have music pumping from speakers at every turn like Disneyland Paris.

The site is vast at 150 acres but seems manageable to get around. You will need a map, though, or you could find yourself going around in circles as the signposting is confusing.

It took us two days to get around the park but if you are just going for the day I’d recommend downloading the free resort app (at legoland.co.uk) and researching the attractions that suit your child’s age group so you don’t waste time wandering around aimlessly. It’s also a good idea to check the height and age restrictions on some of the rides beforehand to avoid meltdowns when you get there.

What impressed us the most was the quality and range of the rides and attractions. One of the first we came across was the Atlantis Submarine Voyage which takes you underwater into a giant aquarium with a coral reef, tropical fish,sharks and manta rays.

Two of the kids’ highlights were in the Lego City area of the park – Coastguard HQ where you steer a battery powered boat around obstacles on a marina and the driving school where kids get to drive electric cars and have to observe the rules of the road.

The park is aimed at children between the ages of three and 12. To my relief, there were no white-knuckle rollercoasters, although my 10-year-old son was a bit disappointed. There are two rollercoasters in the Knight’s Kingdom, one called the Dragon’s Apprentice for younger kids and a faster, slightly scarier one called the Dragon for older kids, which my boys, aged 10 and eight , loved. Other highlights included the Laser Raiders in Kingdom of the Pharaohs, which is like a ghost train but you shoot your way with a laser gun through a labyrinth, targeting mummies and skeletons.

When the pace starts getting to you, there’s an X-box Gaming Zone in the Imagination Centre, where parents can collapse into a heap while the kids play. There’s also a 4D cinema in the Imagination Theatre which screens short films at regular intervals.

It was bucketing down the second day we were there and we had the run of the place. This was the day we devoted to splash rides, the main ones being the Pirate Falls Treasure chest – where the boat suddenly plummets at speed down a steep descent – and Viking River Splash where you surge downstream in a spinning boat. There are family dryers outside the splash rides where everyone can hop into a booth and jets of hot air dry you (while fully dressed) standing up – an Irish mammy’s nightmare. Think of the arthritis in years to come!

We stayed in the Legoland Resort hotel in the grounds of the park which is very convenient but expensive. It’s a matter of weighing up whether you want to spend the price of a holiday in Spain on a short break including flights or make savings by staying outside the resort.

The food in the resort was of varying quality and not cheap. There are five restaurants and cafes and we opted both days to have our lunch at the Burger Kitchen in Pirate Shores which has meal deals for about £6-£7 each.

The only bum note of the trip was the new part of the park, Heartlake City which has a Lego Friends theme and is aimed squarely at little girls. It’s very pink, very girly and the sentimentality is laid on with a shovel. There’s a show every evening featuring young women wearing different coloured long wigs who lip-sync to Lego Friends songs. It felt totally out of step with rest of park and even my six-year-old daughter who is the target audience, found it cringeworthy.

Our two-night trip for one adult and three children flying British Airways to Heathrow over the June bank holiday weekend and staying at Legoland Resort Hotel cost €1,325. For that we got a themed room, breakfast, and two-day entry to the park, lego gifts in the room and access to a splash pool in the hotel.

There are cheaper package deals available on a number of sites if you are willing to travel a distance to the park. Legoland also has a number of partner hotels in nearby Windsor.

Kellogg’s has an offer on some cereal packets for free entry for one child with a paying adult and with Tesco’s Clubcard UK Days out offer, €11 in vouchers will give free entry for an adult or child.

If you just turn up at the gate, entry for a family of four will cost £188.40 but this reduces to £113.04 if you book online two days in advance. There are one and two-day park tickets and savings per person if you go in a group of seven or more. Q-Bot passes cost from £15-£75 depending on the level of access you want.