In search of Elena Ferrante’s Naples 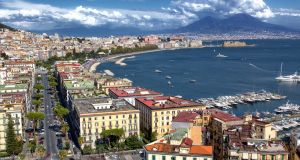 Naples is back on the map as a go-to city, thanks to the popularity of enigmatic author Elena Ferrante.

‘Naples,” the thread begins, “I’ve been there many times and it just seems to get worse. Everything is a scam and there are crooks and small gangsters everywhere waiting to rip the chain off your neck. Garbage, hookers and fake everything.”

In the minds of the collective imagination, Naples has long been a strong contender for worst European city you’ve never been to. It’s most famous reference in popular culture in recent years has come in the form of the brutally cinematic Gomorrah, whose scalpel-sharp depiction of the irredeemable squalor and violence wreaked by the Camorra mafia.

Now, however, Naples is back on the map as a go-to city, thanks to the popularity of enigmatic author Elena Ferrante. Her critically acclaimed Neapolitan novels have sold more than 800,000 copies in the US and made the top 10 of every important 2015 booklist.

Ferrante is the biggest literary phenomenon to have come out of Italy in decades. Last month marked the writer’s highest achievement yet when the last volume of her quartet, The Story of the Lost Child, was shortlisted for the influential Man Booker Prize. Press-shy and writing under a pseudonym, Ferrante barely gives interviews at all (and then only via email). This foments speculation around her true identity.

Many believe her to be a team of writers; others conjecture that she is the wife of a respected Italian academic. Some have suggested that Ferrante is a man – a speculation which the author descended from her tower of mystery to quell.

The novels form a bildungsroman around the lives of Lila and Elena, set in one of city’s most deprived rioni (districts) in the 1950s. The intensity and vitality of the girls’ experiences are set against peeling grey walls, domestic violence, criminality and drab poverty.

A testament to Ferrante’s enticing convocation of Naples is its newfound popularity among tourists. The New York Times and the Guardian have both run articles on how to visit Naples “in search of Ferrante”. Pizzas have been named after her, tour guides hare advertising tours after her books, and bookshops display her works in their windows.

The popularity of the novels abroad has restored a romance and bygone glamour to foreigners’ perception of Naples, which had previously been reserved for the nearby Amalfi coast. Much like the paradoxical relationship between Lila and Elena, Italy has a conflicted relationship with the Naples.

With its world-famous food, Naples has more Michelin-stared chefs than any other Italian city. The common phrase genio napoletano reflects the volume of creative geniuses who claim Naples as their birthplace, among them Sophia Loren, Enrico Caruso, and Vittorio De Sica. Its opulent architecture reflects its strange position in history as a Swedish-ruled city, a territory of the Spanish empire, and the site of ancient Greek and Roman settlements.

Yet even the most innocent review of a Neapolitan pizzeria reads like a warning from an over-anxious mother: “Be careful and avoid arguments with men offering to park your car. Be careful of unofficial taxi services. Avoid engaging in any gambling. Avoid these neighbourhoods . . . ”

In a 2015 survey run by national newspaper Il Sole 24 Ore, Naples topped the list (“once again”) as the Italian city with the worst quality of life. For years it has made headlines for the ongoing Camorra-related mishandling of its rubbish, resulting in constant concerns over the contamination of water and food supplies.

Naples gets plenty of bad press. So it was no surprise that when the New York Times wrote not one, but two articles praising the city, Neapolitans were eager to not let anyone forget about it.

The tour guide who brought journalist Ann Mah around became a subject of local interest. In an interview with news blog Il Napolista, Francesca Siniscalchi talked about Ferrante’s Naples.

“The city changes alongside the narrative,” she says. “Above all, Ferrante’s Naples is not made up of preconceptions or known places. There’s no football. Even without retreating from talking about the Camorra, it is still a million miles from the Naples in Gomorrah. The city doesn’t have to change. It is us that have to grow and take stock, re-appropriate what riches we have at our disposal here.”

Siniscalchi’s vision of Naples as an unfairly maligned and bypassed city would be shared by many. Aside from Ferrante’s literary prowess and her unconventional secrecy, her resuscitation of Naples’s spirit is what she is commended for most in her home town. Ferrante suggests that while it may be in the rough, a diamond Naples still remains.

Ardent fans will recognize everything from Siniscalchi’s tours, which start at the Rione Luzzatti, the rione believed to be where Elena and Lila grew up. Tour guides still warn visitors to be “careful” there. It’s bordered by Via Emanuele Gianturco and the tracks of Napoli Centrale train station, which feature throughout the books.

There is a stop at Via Taddeo de Sessa, the stradone (wide road) that the characters walk up and down so frequently in the first books. Piazza dei Martiri, which features prominently, is situated in the midst of the upmarket Chiaia shopping neighbourhood, where Lila’s shoe shop is located.

Il Rettifilo where Lila buys her wedding dress in The Story of the New Name, is also a stop and most likely the bustling Corso Umberto. The upscale neighbourhood of Posillipo, where the last books go, is another stop, offering tourists amazing views of the Gulf of Naples.

Elena Ferrante fever will continue to rise regardless whether or not she wins the Booker. But Naples’ fate is less certain.

In her Napolista interview, Siniscalchi says that her greatest hope for Naples is to see its riscatto, a word that neatly encompasses both “redemption” and “ransom” in its meaning.