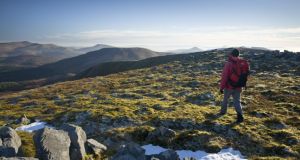 A hiker on summit of Slieve Carr, in the Nephin Beg Mountains

Tóchar Phádraig, Co Mayo
The walk from Ballintubber Abbey to Croagh Patrick is possibly the most alluring in Ireland, a 35km pilgrimage route that goes back to Pagan times. Walkers should register at Ballintubber Abbey, where Fr Fahy will see you off with booklet and map, and accept your €10 donation to cover insurance and upkeep.

The Kerry Way
Basically the Ring of Kerry for people who can’t stand coaches and tour guides. At 230km, it’s Ireland’s longest waymarked trail, starting and finishing in Killarney, and looping anti-clockwise around the Iveragh Peninsula, passing through isolated and dramatic countryside. Highlights include the Lakes of Killarney, MacGillycuddy’s Reeks, Derrynane National Park and the towns of Glenbeigh, Caherciveen, Waterville, Sneem and Kenmare.

The Great Southern Trail
An enchanting glimpse into the forgotten world of steam travel, the trail offers unique access to a 36km stretch of West Limerick/North Kerry that was part of the Limerick to Tralee railway line from 1867 to 1975. Community groups still lament the passing of their Great Southern and Western locomotives and have strived to reopen the line as a walking/cycle route; so far only the 36km stretch between the wonderful Palatine museum in Rathkeale railway station and Abbeyfeale via Ardagh is open. It will eventually stretch to Tralee.

The Royal Canal
Following this mercurial strip of silver, silky water that runs from Dublin through Kildare and Westmeath to Longford is like stepping back into Ireland of 200 years ago. The 144km journey from Croke Park to Clondra, where the Royal Canal meets the Shannon, takes three days to cover, mostly on gravel or tarmac towpaths. Though the stretch around Dublin is grim, the rest is tranquil, unspoilt countryside with perfect relics of late 18th-century industrial architecture.

The Burren Way
A 123km linear walking trail which heads from Lahinch via the Cliffs of Moher inland on a rambling serpentine route along old green roads, ancient cattle droving paths, forestry tracks and minor tarmac roads, through the crumbling limestone hills to Neolithic tombs and cairns, and the magnificent vistas from the summit of Mullaghmore. You pass through Doolin, Lisdoonvarna, Ballyvaughan, Carran and Corrofin. Picnics each day should consist entirely of Burren specialities: St Tola goat’s cheese, Burren smokehouse salmon, New Quay bagels and Linnalla ice cream.

The Sheep’s Head Way
Beginning in Bantry, this 88km trail takes you down the most underrated and under-populated of the five peninsulas of Munster. Sheep’s Head is a wild, rough, undulating ridge jutting out into the Atlantic, with sweeping seascapes and glorious views across to the more renowned Beara and Mizen Peninsulas.

The Bangor Trail
Following an old drover path between Bangor and Newport in Co Mayo, this tough, remote 37km hiking trail is through the Nephin Beg range, described by the naturalist Robert Lloyd Praeger in his 1937 book The Way That I Went as “the very loneliest place in this country, for the hills themselves are encircled by this vast area of trackless bog”. Navigational ability and a tolerance for midges is required as you are entering Ireland’s only true wilderness.

The Mourne Way
A two-day, 40km walk from the seaside resort of Newcastle, Co Down to Rostrevor on Carlingford Lough. It’s a moderate walk that skirts around rather than over the impressive Mourne peaks. Highlights include the 500m summit of Butter Mountain, the view from Hen Mountain, the hike up Slievenamuck and some tranquil stretches of the Western Mournes.

The Western Way – Galway section
A 66km route offering an alluring taster of the sumptuous wildness of Connemara. Starting from Oughterard, the trail winds around Lough Corrib before heading across the regal Maumturk mountains. This hard slog is rewarded by the enchanting descent into Inagh Valley and a long squelch through the bog between the Twelve Bens and the Maumturks to the endpoint at Leenaun at Killary Harbour.

The Sligo Way
The ideal opportunity to experience the often-overlooked Ox Mountains. This 78km trail stretches from Lough Talt near the Mayo border right across Sligo to Lough Gill at Dromahair, Co Leitrim. There is no significant climbing involved and much of the route is on forest and mountain tracks with phenomenal views east to Ben Bulben, north to Slieve League in Donegal and west to Mayo’s Nephin range. Keep an eye out for megalithic tombs and Yeats’s Lake Isle of Inishfree on Lough Gill.