The colourful and the curious: Step into the exotic at Massy’s Wood 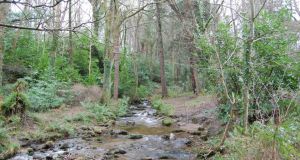 Heading through Dublin’s southern suburbs towards the mountains, I’m always buoyed by how quickly city turns to country. My curiosity piques as housing estates fade into small fields, wooded lanes and ramshackle farmyards.

Massy’s Estate lies just beyond the reach of the city, south of Rathfarnham. From the outside it appears a typical wood, but look closer and you’ll find something much more exotic.

I arrived on a February afternoon to hike the trail that follows the Owendoher River through the forest. In the 1930s, trees from Europe, North America and Asia were planted here. Plaques mark many of these specimens, and we tried to determine each tree’s identity before arriving underneath it.

My guesses were almost always wrong, but in my defence I had never seen a Bhutan pine or West Himalayan spruce before. There are western hemlock, cedars, limes and giant sequoia here too.

The exotic trees and infesting rhododendron make Massy’s feel almost sub-tropical. This was once the site of a grand estate, of which there’s evidence all around: stone bridges, garden walls, an ice-house where lamb was stored.

According to Frank Tracy’s book If Those Trees Could Speak, the estate collapsed due to the extravagant lifestyle of the sixth Baron Massy. In 1924 his grandson Hamon Massy was evicted from Killakee House and deposited by the road on his mattress.

The family later moved into a gate lodge on the estate, and Hamon was often seen walking in the woods thereafter. Killakee House was knocked in 1941. Part of the original military road, built by the British in 1803 for quick access to the Wicklow uplands, runs through the grounds.

The Owendoher is a glorious little river, dropping through a long series of falls, pools, and riffles. In 1931, the gardaí found a secret IRA weapons stash on its banks. The elaborate, booby-trapped bunker held a tent, bedding, tinned food, and a supply of rifles, revolvers and explosives.

The riverside trail looked short on our map but was tougher than we expected, climbing about 200 metres over its course. The wood narrows at its upper reaches, bordered by fields and farmyards. From here we looked out over the city, and tried to pick out urban landmarks through the pale afternoon mist.

Up here, high and unsheltered, the wind whipped into the woods, and we had to navigate around pines that had been torn up and dumped across the trail.

At the top of the wood, we turned back, and downhill we crossed the river and joined the nature trail. The Dublin Mountains Partnership has published an activity book for the trail on its website. But our legs were weary, and once someone ventured the notion of tea, we were making our way back to the car park before the light faded.