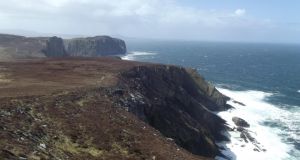 Around Letterkenny, it’s one of those days you wouldn’t “put a dog out”. Long experience has taught me, however, that an egregious day inland doesn’t necessarily mean a bad one on the coast. So I persisted, and was rewarded when the monsoon relented passing Creeslough. Then, as I reached my parking place in the treeless landscape west of Dunfanaghy (see panel), the rain suddenly ceased.

Doubling back about 100metres, I followed a track on the right to reach the remains of a disused coastguard station. A necklace of such buildings was established amid the general paranoia of 1939 to keep an eye on the Irish coast during the second world war.

Beyond, I tagged a gun barrel straight fence for about a kilometre to attain the coastline. The heathery terrain was tedious and uneven in places, but pin-up views of the rugged Donegal coastline provided adequate compensation. To the west, Tory Island seemed postage stamp miniature amid the unrelieved emptiness of the great blue ocean. Gaining the coastline, I was immediately bathed in sunshine and found myself standing above great cliffs that toppled unpredictably to the eye-watering whiteness of the surf, booming below.

Now it was gently uphill on an informal path towards Horn Head that rose above me. Crossing a fence, I gained the headland, which consists of two vertigo inducing fingers of land pointing at the ocean. To the south the hydra headed coastline reminded me of the sublime three sisters on the Dingle Peninsula while northwards the sea had ground out great fingery bays that meandered lazily into Donegal’s wild heartland.

Eventually I retreated to the nearby remains of a Napoleonic watchtower and found a sunny place for lunch. Then I tracked the undulating coastline on another informal and occasionally uneven path that at times strayed too close for comfort to the great cliffs. Eventually, the going improved underfoot as the route swung north. Now came a fine section of coastal rambling before I ascended steeply to reach the viewing point at Flaggy Faugher.

Next was a short flog up Croagnamaddy Hill. Crowned by a trig point this eminence offered a great 360 degree view that was way out of proportion to the modest 252m elevation. Directly below was serene Sheephaven Bay, and, beyond, the wind tortured coastline misting eastwards towards Malin Head. To the south lay Donegal’s most celebrated landscape – the marvellously bleak Derryveagh Mountains included those noblest of Donegal peaks, flat topped Muckish and conical, quartzite Errigal.

Captivated by it all, I tarried a while until the call back to the present became too strong to ignore. Striking south from the summit, I continued for about a kilometre to reach a public road where the left option led to a T-junction. Here I swung right and within about 10 minutes was back at my parking place where I concluded that Horn Head is surely a place that visitors leave with happier, more contented thoughts.

Dining out: 12 of Dublin’s best restaurants with outdoor spaces
2

Green list, traffic light, refunds, quarantine: Where do we stand with travel now?
4