Valley of intrigue: History and nature delight on the Dingle peninsula 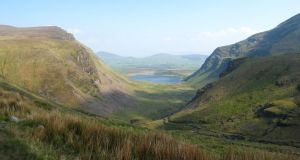 This two-car walk, suitable for most hillwalkers, is best completed in good weather, with good visibility. It cuts across the Dingle Peninsula by an ancient track and provides spectacular views north and south.

Take the gravel track leading southwards from a sharp bend in the road, following the Glennahoo River into a valley called Macha na Bo, the Plain of the Cattle, the green, riven flanks of which soon tower on each side. These ramparts become more dramatic as we progress, an appropriate backdrop for the place where the pagan magician and god Crom Dubh, the Black Croucher, is said to have been born. He survived to be baptised by St Brendan, and to have his own Christian feast day, Domnach Crom Dubh.

At the head of the valley, under a seemingly insurmountable wall of mountains, there are ruins of a clachan of ancient farmsteads. The families that lived here in the 19th century were the O’Donnells and the Dinneens, and up to 40 years ago, the last inhabitant of this place, an elderly woman, used to invite walkers in for tea and cake. Our route bears left and uphill away from the clachan, and climbs steeply up the side of a grassy ravine on a narrow path. Close by is a stream, overhung by stunted holly trees and cushions of fraughans, its rocky banks decorated in early summer with posies of violets, primroses and St Patrick’s Cabbage.

Our route fords the stream by way of a flat rock that is called The Wolf’s Step, so named because it is one of the many places where the last Irish wolf is said to have been hunted down and killed, in about 1710.

Here our route parts company with the stream and goes right, following a grassy path that rises diagonally right up to a peaty plateau at the back of the valley, from where there are great views northwards down Macha na Bo to Brandon Bay, and to the east to the peat-hagged summit of Beenoskee.

The rough pathway is followed south-eastwards across the plateau; it can be seen from the mass of stones along the route, in some places three metres wide, that this was, perhaps, once an important north/south highway. During peat-cutting here years ago, a Bronze Age halberd, a kind battle axe, was found, confirmation of the use of this way across the peninsula.

In the far distance to the south the undulating shapes of the Macgillicuddy Reeks can be seen in good conditions, and soon, the valley we are heading for can be seen ahead between two mountains, Cnoc Mhaoilionain to the right and Reamore to the left. The story tells of Cuchulainn, trying to rescue a young and beautiful girl called Scal from an ugly giant, having a rock-throwing fight between the two tops. When Cuchulainn on Reamore was getting tired, he failed to duck and was stunned by a boulder. Scal, thinking he was dead, threw herself into Lough Annascaul and drowned.

As the route begins to descend, a glimpse of Lough Annascaul signals we are approaching the end. The ancient road becomes more pronounced further down, complete with retaining walls as it sidles down the flanks of Cnoc Mhaoilionain. The Garryvagh river is followed as it descends to the valley bottom. It quietens as it slows and flows serenely into Lough Annascaul, and the end of our walk.

School closure might be a dream for some children, but it is a nightmare for others
5