Away from the theme parks of Orlando, the beaches to the north of the Sunshine State offer great options for family holidays 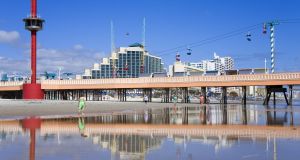 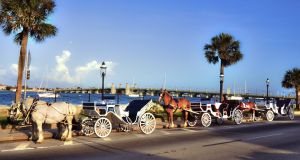 Horse-drawn carriages line up in the town of St Augustine in Florida. Photograph: Getty

When choosing our holiday destination, my wife was four months pregnant so “no surprises” was the dominant criteria, closely followed by proximity to Ireland and the desire to be near the ocean. In mid-April Europe is too cold and the Zika virus ruled out the Caribbean and South America.

Florida is America’s theme park, literally and metaphorically. Even the most basic research will let you know what you’re in for before you visit. For Mickey Mouse, go to Orlando. For a taste of Ye Olde Florida, visit St Augustine. Want to see a man with calf implants do lunges in an outdoor gym? Go to Miami’s South Beach. If you don’t enjoy your time there, you’ve really only yourself to blame.

With a nod to Hunter S Thompson and the heart of the American dream, we began our journey in Daytona Beach, best-known for its biker bars, devotion to tack and the Daytona 500 motor race.

Our travel guides told us it was not so much a town as a series of tattoo parlours, hotels and discount stores. Driving around felt a bit like being in a Yogi Bear cartoon, where the background keeps repeating itself while you remain static. Missed the turn off for fast-food chain Chick-fil-A? No problem, there’ll be another one in less than a minute. Run out of over-decorated non-absorbent beach towels? Don’t worry, they say in Daytona you’re never more than 50m from a Dollar Discount store.

The shops and restaurants all follow a similarly tacky theme, which can best be described as “let your seven-year-old child loose on Microsoft Word Art 1997” but this neon vista barely impacted on our holiday consciousness because Daytona’s real assets (and the reason anyone besides Nascar fans come here) are the wide, soft, sand beaches and the warm, clear welcoming ocean. And, crucially, our hotel was a three-year-old’s dream; a heated outdoor pool, a heated indoor pool, a mini pool, a water slide, a basketball court, a beach, free BBQs, loads of other out-of-control kids, and hourly fun with an “activities co-ordinator”. God bless American enthusiasm!

The only time we ventured beyond our family bubble was for dinner, and we usually chose the nearby town of New Smyrna, reportedly the shark attack capital of the world, and everything that Daytona isn’t. No fast-food restaurants, no franchise chains, no petrol stations, and no monster trucks with the Confederate flag waving out the back window.

If the measure of a town’s success is how happy, healthy and friendly the old people are, then everyone should retire in New Smyrna. The numerous restaurants and bars were filled with tanned energetic-looking sixtysomethings drinking alcohol with a zeal that would impress an Ireland football supporter. If you like simplicity, surf, sun and wine in your holiday, this is the place to visit.

The next big resort down the coast from New Smyrna is Cocoa Beach, home town of the greatest surfer of all time, Kelly Slater. It has the feel of southern California with sun-crisped kids skateboarding to the beach, yoga centres on every block and whole districts devoted to yoghurt, but the outskirts are grotty, the beaches are infested at the weekend, and the whole place is perched on the edge of a motorway. We stayed three nights, which was the exact right amount of time.

On the rebound from a cheap motel experience in Cocoa, we decided to go upmarket for the final leg. If you squashed Manhattan’s Upper East Side into a pretty town of 15,000 people and showered it with 320 days of sunshine a year, you would get Vero Beach; so well-off it doesn’t even have a supermarket.

To our surprise and embarrassment, our hotel only had valet parking. They literally wouldn’t let us park our own car. “Sir! Excuse me, sir, you can’t park here. Just give me the car keys and I will move it,” said the helpful young valet attendant as we furiously tried to gather all the banana peels, squashed raisins, wet towels and discarded socks in the back seat.

On our first visit to the hotel pool, we bashfully stared at our toes as the attendant insisted on putting our towels out and puffing our pillows. We tut-tutted at the rich people ordering from the pool bar when they could just bring their own for one-fifth of the price. By day two, we were demanding more ice in our drinks and cursing the angle of the sunbed headrest. The mind adjusts to the good life frighteningly quickly; its going back the other way that’s the problem.

HOW TO... FLORIDA BEACHES

WHEN: March to May and September to November are the best times to visit. Temperatures are usually mid- to late-20s, and the mosquitoes are less of a factor.

WHERE: Daytona Beach is the safest place for young children to swim as there are usually no waves or rips of consequence. Vero has a strong shore break and most families swim in hotel pools. New Smyrna, like any surf break, has rip currents and sometimes big waves. Cocoa Beach is flat and safe for kids near the shore. Some 200 non-fatal shark attacks have been reported in Florida since 2000, many of them in New Smyrna Beach.

GETTING THERE: Aer Lingus flies Dublin-Orlando direct twice a week. You need a car in northeast Florida. Collect from Orlando Airport. Getting from town to town is easy but a GPS is advisable. Daytona, New Smyrna and Cocoa Beach are one hour from Orlando, Vero Beach is about two hours.

STAYING THERE: Cocoa and Daytona have a huge range of hotels and apartments. In Daytona, Simon stayed in the family-oriented Sun Viking Lodge. There aren’t many options in Vero, so book early – Simon stayed in the Vero Beach Hotel and Spa right on the beach. It has an outdoor pool and jacuzzi. There’s surfing, stand-up paddleboarding, golf courses, bike rental and sea fishing in almost every resort.

How many sexual partners is ‘too many’?
9