First tracks: Opening day of the ski season is a joy 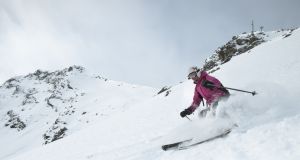 This early in the snow year it’s easy to fool yourself into thinking you’re more adventurous than you are. 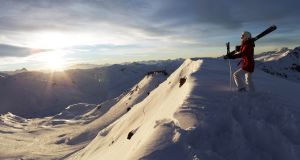 There are few other skiers on the slopes and at times you have just the mountains for company. 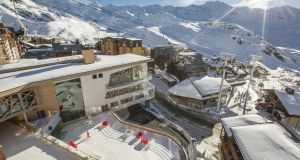 As obnoxiously self-satisfied moments go, being on the ski slopes on the very first day of the season is hard to beat. The off-piste has barely a carve in it. The ski lifts are freshly polished. The rented gear is in perfect shape. And the smug beams of yourself and your crew could power a French mountain village.

For shameless snow fiends, Val Thorens has to be high on the wish-list. It is the highest resort in Europe, which means it’s usually among the first to open. The whole area is purpose built, and while there are still a few lumpy remnants of the original 1970s buildings, it has developed into a sophisticated resort with a huge choice of runs, and a largely wealthy clientele to match. The town is at 2,300 metres, and nearly all of the resorts runs are above 2,000 metres, so you are almost guaranteed decent snow on the majority of the runs. There are 68 marked runs along with a few terrain parks, and it offers off-piste, ski touring, snowpark, boardercross and telemark skiing, if you want to vary your repertoire. The main snow park is on the SFR Slopestyle Tour and the FIS Skier X World Cup also regularly calls into the ski cross arena, which means that even the most experienced skiers will not go unchallenged.

The facilities for skiing and snowboarding are top notch, but those more interested in off-slope activities might want to look elsewhere. Because there was no original village here, the selection of bars, restaurants and other facilities is more limited than in some of the other villages in the vast Trois Vallées ski area. But we are here for the snow – and in late November on the very first day of the French season, it’s sublime.

This early in the snow year it’s easy to fool yourself into thinking you’re more adventurous than you are. There isn’t much tree cover at this elevation, and with few other skiers on the slopes and at times just the mountains for company, it’s a thrilling experience to hurtle down the slope below the Glacier de Peclet, with the jagged ringfort of mountains that overlook the resort at your back.

I’ve no idea whether Val Thorens attracts a better type of snowboarder, but it certainly has a better class of instructor. During our four-day stint, rather than let a variety of bad habits slide, our two instructors take turns breaking everything down, and rebuilding my stance and approach. It might make the first day more challenging, and at times I feel like I’m on my first week on the snow, but halfway through the second day the results are remarkable. I’m travelling faster and more safely than before, and the off-piste powder is proving too pristine too resist.

It would take a long time to exhaust the pistes on offer here, whether you are new to the snow, or a speed expert with a powder habit. But if you want to travel further afield, the resort is also linked to the areas around Meribel, Courchevel and Les Menuires.

Early in the season, there are a few drawbacks. When we visit, in late November, many of the bars and restaurants have yet to open their doors for the season so the choice for dinner or drinks is limited and the town has a bit of a bank holiday feel to it. In this case, though, it doesn’t matter, as we are staying in the all-inclusive 4 Trident Club Med Val Thorens Sensations resort. The hotel is bright and brand new, all sleek glass, wood and concrete, designed by Sophie Jacqmin and Studio Arch. Facilities are high-end, you can ski in and out of the resort, and the bedrooms are generous in size, with balconies and views of the slopes even in standard rooms.

As well as group lessons and ski passes, the price includes almost all of your food and drink, which will appeal to many people. This means soft drinks and cocktails, hot drinks, spirits, beer and wine from the bars (hot-drink machines and baskets of baked goods are scattered throughout the hotel and are particularly welcome after thumping off your gear in the elegant boot room). Premium brands or champagne will be extra, though even without this the choice is far from limited.

Knowing exactly how much you are going to spend on a week away skiing is a real bonus, particularly as après-ski wining and dining - when you are flushed from your Olympic efforts on the slopes – has a habit of doubling the cost of snow holidays.

Most of the food is served in the huge main buffet restaurant and the variety on offer is impressive. The hotel also has an Epicurious “gourmet lounge”. It focuses on regional, traditional dishes in a sleek setting with a Michelin-starred chef calling the shots, but needs to be booked in advance.

The resort has all the trappings familiar to package holiday customers. When we arrive back in the afternoon, a mini party is taking place, with free snacks and cocktails, and relentlessly cheerful staff dancing around in Disney outfits. Each evening a different entertainment is organised in the main bar, the highlight being a full-on Eurotrash disco that sees those same staff (when do they sleep? what are they feeding them?) dressed in robot outfits that wouldn’t look out of place at an Ibiza club closing party. The bar has been draped in glow-in-the-dark cushions and blankets spattered with neon paint.

It’s all in good, technicoloured humour and the staff really are remarkably helpful and charming. Those of a slightly grumpy disposition might find themselves having to plan an escape to one of the bars outside the resort, where the service – praise the snow gods – largely consists of ignoring you. Some French traditions are worth keeping.

From eating healthily to staying warm, how to treat Covid-19 in the home
4

From yoga to HIIT training, your guide to solitary exercise
8