And the winner of the Best Place to Go Wild in Ireland is . . .

This year’s winner was chosen for its balance of nature, activities, wilderness and beauty

The Irish Times has chosen the Best Place to Go Wild in Ireland. The Erris region in northwest Mayo was the most nominated place in the competition. Video: Daniel O'Connor

‘You feel as if you’re driving into a Paul Henry painting.’ The view from Inis Bigil, Erris, Co Mayo. Photograph: Dara Mac Dónaill

At every stage of this year’s Best Place to Go Wild in Ireland competition, we judges had lengthy discussions about “wildness”.

It’s a question of balance and sustainability – for locals, for visitors and for the natural world. You need somewhere to stay, but not a landscape blighted by tour buses and high-rise hotels. You don’t want traffic and bustle, but you do want coffee and cake. (Well, some of us do).

The competition was a hunt for the best places in the 32 counties to experience nature, from empty beauty spots, to dramatic locations that let visitors actively engage with nature through sports such as climbing, surfing, walking, biking or kayaking.

In late March, we asked readers to suggest their personal favourites, and in the weeks that followed, more than 3,800 people took to our website to tell us about a wealth of locations around the country.

We put their nominations before our panel of judges and then visited all the top contenders.

The winning place, we decided, should be reasonably accessible while relatively unexplored. It should offer contrasting topography, healthy biodiversity and opportunities to interact with the natural world in a variety of ways, from gentle strolls through lengthy cycles to mad coasteering.

From a shortlist of five ravishing locations, we could choose only one winner.
And here it is, the Best Place to Go Wild in Ireland 2014: Erris, Co Mayo. 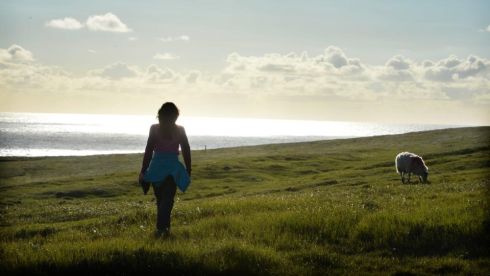 “A glorious, wild, uniformly unspoilt and stunning little-known area” was the verdict of Irish Times feature writer Rosita Boland after her research trip to Erris last month. Her words echo those of naturalist Robert Lloyd Praeger who, in the 1930s, wrote that Erris is a place where “you are thrown at the same time back on yourself and forward against the mystery and majesty of nature”.

Now that’s what we call wild. “Erris is off the beaten track,” agrees Rina Garrett, development manager with the tourism co-operative Erris Beo. “But it’s worth going off that track to get here.”

An area the size of Louth with a population of just 20,000, Erris stretches from the 11,000 hectares of mountain and blanket bog that is Ballycroy National Park – Ireland’s only true designated wilderness – to the white sandy beaches of the Mullet peninsula. Even here there is variety: the windswept Atlantic side is heaven for surfers, while the sheltered east-facing coves are perfect for family pottering.

The name Erris comes from the Irish Iar Ros, which means “western promontory”. Sure enough, Erris has more cliffs than you can shake a walking stick at. Plunging into the Atlantic all along the north Mayo coast from Belderg westward to Erris Head, they offer not just glorious walks but the chance to spot dolphins and puffins, peregrine falcons and minke whales, as well as endless inlets and coves to be explored in a kayak.

Approaching from the east, you feel as if you’re driving into a Paul Henry painting. When you come to a place where there are open spaces in all directions, with the horizon graced by a 360-degree ring of slate- blue mountains, you’ve arrived in Erris.

“I grew up in South Africa and this is the only place in Ireland that brings me closer to home,” wrote Cheran Concannon. She moved to Belmullet with her husband – who’s from Sligo – in 2005. “I love the openness of the countryside here,” she says. “And the beaches. I live on the Mullet peninsula, and every time I cross the mound to go over to the rough side of Elly Beach – every time I hear the waves pounding on the sand – it takes me home immediately.”

Born and bred in Erris, Katherine Mangan summed up her feelings in a poem which began: “You can come to Erris for a stag or a hen/For music, song or letters/For sport or the light that artists prize/There’s no wilder or no better . . .”

“But it’s the community that’s really the most special thing,” she says. “They all seem to rally round so well; they support each other, and support the place.” For a visitor, this community spirit is one of the most striking things about Erris. If you’re driving, people wave hello. If you’re walking, they stop to say hello. They’re proud of their place and keen for you to enjoy it too.

We’re not saying Erris is perfect. The down side of the “wild” equation is that the area has less visitor accommodation and amenities than it might have. Holiday rentals are hard to come by, and the lack of an eco-friendly campsite would appear to be a particular oversight in an area where camping ought to be a dream option.

And the up side? Here we are, out of space, and we haven’t told you about the idyllic boat trips Sean Lavelle runs to Inis Gé, the maritime adventures offered by David Tyrell’s Wavesweeper centre, the four-star quirkiness of the Talbot Hotel, or the spa treatments at Josephine Geraghty’s pristine B&B, Brú Chlann Lir. Or the fun to be had at Una’s Pub out in Blacksod, or McDonnell’s in the middle of town.

“Erris is a hidden gem,” says Rina Garrett. “You can get lost on an uninhabited island, but you have all the mod cons as well. It’s authentic and it’s real.” 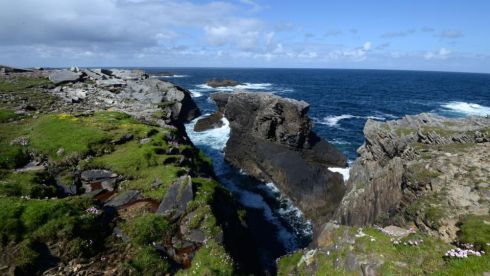 Where is it? Stretching from Ballycroy in the south to Ceathrú Thaidhg in the north; with Belmullet as its biggest town, Erris is an area the size of Co Louth. Two thirds of it is flat blanket bog and there is very little habitation, making it one of the most remote areas in the country. What can you do there? Take a guided walk from Uinsíonn Mac Graith - who you can ask for in the Seanscoil, Carrowteige - or Agatha Hurst - who you can ask for at the Broad Haven Hotel - both of whom have unrivalled local knowledge.

David Tyrell, the manager of the Broad Haven Hotel, runs all sorts of seasports including coasteering and snorkelling (wavesweeper2@gmail.com). Ballycroy National Park, in the south of Erris, has walks, a good exhibition centre on the blanket bog, an excellent cafe with incredible views and lovely home-made food.

Where can you stay/eat/drink/unwind? There is a very fine four star boutique hotel, the Talbot (thetalbothotel.ie), in the centre of Belmullet. The food here is excellent. There is also a eco-friendly B&B in Black Sod called Léim Siar.

Want to take your pizzas to the next level? Try using one of these Irish pizza steels

Steve Zahn: ‘I’ve never been a slacker. I live on a farm’

How can we get our 14-year-old son to do his homework?

‘I’m falling in love with my online language tutor’

Blackrock bake-off: How much dough would you need to raise to live over this shop?

‘No one talks about the non-Irish living here. We basically don’t exist’

Nursing home at 61: ‘I nearly died of shock when I was put in there’