A walk for the weekend: Killarney National Park

This weekend, be charmed by taking a walk through Muckross Estate in Kerry 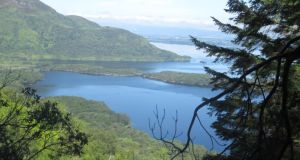 The final day of my Killarney holiday came with unfinished business. Seduced by the towering MacGillycuddy’s Reeks, I had neglected the charms of Killarney National Park. Now was a chance to make amends. I sauntered out in glorious August sunshine across the grounds of Muckross Estate and followed a path into the ancient yew woods. Then, it was along an isthmus bisecting the turquoise waters of Killarney’s world-famous lakes. Standing sentinel here, the Colleen Bawn Rock recalls the tragic fate of Ellen Scanlan (the original colleen) whose murder in the early 19th inspired Julius Benedict’s melodramatic opera, The Lily of Killarney.

Beneath a canopy of intertwining branches, I reached Brickeen Bridge, which marks a conjoining of lakes. North of here the great expanse of Lough Leane is speckled by places with evocative designations: Darby’s Garden, Inisfallen Island, O’Donoghue’s Spy Glass and Elephant Rock. Southwards, Muckross Lake is framed by the Eagle’s Nest and the unmistakable outline of Torc Mountain.

Next stop was Dinis Cottage. This former hunting lodge, which has been transformed into atmospheric tearooms, was busy with cheery groups of walkers and cyclists enjoying a break. Sitting among them, I relished the tranquil scene as boats laden with visitors plied north towards Ross Castle. Then my mind drifted and it occurred to me that Killarney had existed as a tourist destination for more than 15 decades, yet has managed to resist the seductive temptations of “nickel-and-dime tourism” and remain a quality destination catering for discerning visitors.

Blessed with such beguiling names, the Old Weir Bridge and the Meeting of the Waters were always going to snare me onto the short diversion from just beyond Dinis to where Killarney’s three lakes coalesce in perfect harmony. Afterwards, the track undulated by the lake shore to reach a carpark beside the N71, Killarney-Kenmare road.

Joining a trail opposite the parking place presented a choice: a ramble just above the road or a high track on the austere flanks of Torc Mountain. I chose the latter and the next 20 minutes was a conversation-killing slog up steep, stone steps. Then, the slope relented and I collected my reward of exquisite views over the way I had come.

Killarney’s lakes and fells were laid out below in a symphony of colour, and it was easy to understand how Kerry folk have dined out on these charms since an enchanted Queen Victoria visited in 1861.

Now, in amber evening light, the arrows led me to the head of Torc Waterfall. With the cascade sluicing down to my left and strollers now thickening around, I descended to the lower carpark. Then, it was under the N71, into Muckross Estate and along a path, offering dramatic vistas to the mountains guarding the Gap of Dunloe.

Back at the 19th century elegance of Muckross House, I concluded Killarney National Park holds an unbeatable hand with something to suit all-comers.

The best gourmet getaways in Ireland this summer
8

Can I put up a fence and force my neighbour to spend on a survey?
10