A Walk for the Weekend: Enigmatic beauty of the Burren 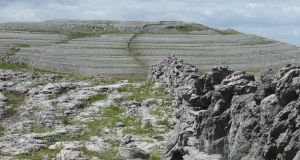 A small piece of my heart forever remains in the Burren, for this is a place that guarantees an authentic outdoor experience. The sublime enigma of the Burren lies with the fact that, in a desert of stone, rare living things and captivating landforms abound. There’s a farrago of richness for botanists, archaeologists, surfers, rock-climbers, geologists and potholers, but today I’ve simply come to explore. A steaming cup of coffee with spectacular gooseberry pie in the Hazel Mountain Chocolate Factory sets me up handsomely for this. Then it is up a nearby lane that meanders easily towards the heartlands of the East Burren.

Swinging right, I divert across a couple of old stiles to visit a place whispering intriguingly of forgotten history. Much about the 12th-century churches of Oughtmama remains shrouded in the mists of time, but local tradition ascribes the site’s foundation to St Colman. Supplanted by the arrival of the Cistercian Monks to nearby Corcomroe, the churches now stand forlorn, roofless and surprisingly little visited.

Back over a stile and right through a gate takes me across a stream known locally as Sruthán na Naomh, which, unusually for the Burren, flows above ground. Now, it is upwards past a few storm-tortured thorn bushes to gain the eye-watering greyness of the Burren karstlands. Fractured benches, demanding some mild scrambling, now convey me to the ridge top and a large Neolithic cashel. As I pass this edifice, I can’t help wondering for what purpose this extensive enclosure was built on this exposed and inhospitable west Clare hillside?

A great vista now unfolds over Corcomroe Abbey, Bell Harbour and the emerald-blue waters of Galway Bay. Gazing down, I am once again reminded of the Burren paradox; an elevated and spectacularly degraded glacio-karst landscape interspersed with the most benign and fertile of sequestered valleys. Medieval monks were renowned for knowing their onions when it came to monastic sites and it’s immediately obvious that here, the Cistercians of Corcomroe bagged a most fertile and sheltered lowland in an otherwise austere and godforsaken landscape.

Onwards now, to gain a stone wall that conveniently handrails me left and downhill over a couple of short but steepish descents to a broad col. Here an expansive prospect opens to the east over the drumlin-speckled landscape of the Gort/Kinvara lowlands. Directly ahead is Slieve Oughtmama, with its great swirls of naked, gnarly limestone, which puts me in mind of some great, grey anaconda trying to squeeze the very life from the mountain.

Thankfully the anaconda remains lifeless as I follow a benign path upwards over its gnarly flanks to reach the summit. Galway Bay to the Connemara Mountains are on my right as I head west and downhill, with a little easy scrambling required before breaking left to regain my path of ascent. Returning to my parking place, I reflect that nowhere else in the Burren has so much to captivate shoe-horned into such a compact and enigmatic landscape.