A walk for the weekend: Big sky country in Offaly 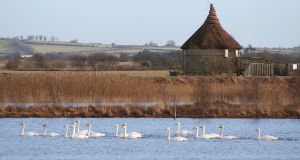 A May morning and I am traversing the sun-kissed, Offaly countryside through a once degraded landscape that has now arisen to bloom again as a mosaic of sustainable and diverse habitats.

Turf-cutting in Ireland dates from the 17th century, with peat often the only available fuel during the 19th century. Bord na Mona industrialised peat production in the 1950s by putting to use what were then regarded as unproductive wastelands. Understandably perhaps, there was little thought of sustainability when well-paid jobs were created in midland towns riven with emigration.

Soon, however, problems arose and when Bord na Mona officials were scratching their heads about bio-diverse peatlands despoiled by turf extraction, workers within the company came up with one solution. Forming the Lough Boora Parklands Group, they produced a plan for rehabilitating a 2,000-hectare cutaway bog in Co Offaly as a sustainable, recreational amenity.

Lough Boora Discovery Park was born and has proven a huge hit. Today I am exploring one of its most captivating trails. The Mesolithic Loop begins from the well-appointed visitor centre before bypassing the coarse fish sanctuary of Boora Lake. A sculpture park comes next where artists found local inspiration from natural and industrial heritage. Here, children are voting with their feet and favouring the climbing opportunities provided by Eileen MacDonagh’s, remarkable ‘Boora Pyramid’.

Next to capture my curiosity are the Leabeg Wetlands. Drainage channels were blocked here to create a wetland that floods in winter. As a reward, whooper swans have taken a shine to Leabeg and journey annually from Iceland to overwinter safely on excellent feeding grounds.

Onwards then through the Offaly flatlands, offering a compelling sense of vastness unconstrained. This is big sky country and a perfect place to fire wide imaginings. The Mesolithic site, discovered in 1977, is where hunter-gatherers camped and thereby proved that Middle Stone Age people didn’t just hug the coastline.

Following a flourishing channel of unreflecting water, which rejoices with plant and insect life, takes me to the last Irish redoubt of the grey partridge. Managed sustainably, using traditional farm practices with fields of wildflowers and wheat, this is a reserve where partridge safely flourish. The shy, rotund, little critters aren’t doing photo-ops today, but on the breeze comes an unmusical kierr-ik, kierr-ik, immediately evoking boyhood memories of rural Ireland when partridge roamed at will.

Approaching the visitor centre, humanity thickens comfortingly like an evening mist. Couples are picnicking by the lakeside. Others are heading out “en famille” to cycle the parklands. It’s a perfect scene of contentment and symmetry with nature.