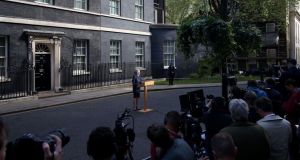 Jessica Harrington A month after winning the Cheltenham Gold Cup the trainer landed her first Irish Grand National when Our Duke cantered to a win at Fairyhouse. “It’s not bad for a 70-year-old,” as she put it

Serena Williams The tennis great revealed this week that she is expecting her first child – leading fans to deduce that she was probably pregnant when she won the Australian Open in January, when she didn’t drop a set

Simon Harris The health portfolio is the most poisoned chalice in the Cabinet, but it does appear as if the Minister for Health sipped too eagerly from the cup when allowing ownership of the new, €300 million National Maternity Hospital to be given to the Sisters of Mercy in an apparent bid to expedite progress

“We are sending an armada. Very powerful. We have submarines. Very powerful. Far more powerful than the aircraft carrier”
Donald Trump invents a phantom fleet on its way to intimidate North Korea

“My way of dealing with it was sticking my head in the sand, refusing to ever think about my mum”
Prince Harry talks about his mental-health issues after the death of Princess Diana

“We’re fighting a war everyone else gave up fighting long ago. The ASTI has become the North Korea of the trade-union movement”
Teacher Fintan O’Mahony criticises the ASTI’s Lansdowne Road approach at its conference this week

Climb in property prices in the 12 months to the end of February, according to the CSO

Number of days Enda Kenny has been Taoiseach, on Thursday surpassing John A Costello’s record as longest-serving Fine Gael taoiseach

Distance, in kilometres, at which a 400m-wide asteroid passed Earth on Wednesday

Age of Violet Brown, from Jamaica, named the world’s oldest person after the death of Emma Morano, the Italian woman who was the last survivor of the 19th century

THE QUESTION: DO RURAL VOTERS LIVE IN A BUBBLE?

Last weekend’s referendum in Turkey was nominally a constitutional change from a parliamentary to a presidential system, but in reality it was a power grab by President Recep Tayyip Erdogan, potentially extending his rule until 2029 and ensuring that his religious, conservative policies become deeply embedded in the fabric of the country.

For opponents of Erdogan and his AKP party there was some consolation in how narrow the vote was, with 48.7 per cent opposing it. And reports have suggested grounds for concern about the fairness of the vote.

But, despite that, the vote was the latest and most significant stage in Turkey’s decline from blossoming European-style democracy to what has been termed an illiberal democracy but increasingly resembles a dictatorship.

It was also the latest in a sequence of votes over the past year that seem like repudiations of progressive social democracy and triumphs of nationalist populism. In the votes for both Brexit and Donald Trump, electorates have narrowly chosen to be seduced by nativist rhetoric.

Although each vote was distinct they had much in common, above all an appeal on the winning side to a sense of “traditional” national identity – one explicitly at odds with a pluralistic, open society. And that message appears to have resonated most with voters outside the major cities in each country.

Istanbul is one of the great, cosmopolitan cities of the world, and although it has strongly supported AKP in the past – Erdogan is a former mayor of Istanbul – it went strongly against him this time, as did Ankara and Izmir. Instead it was the rural Sunni population who gave Erdogan his new powers.

For all the talk of liberal, urban bubbles, rural areas can be sociological bubbles too. While city dwellers must coexist alongside multitudes of people who may be nothing like them, people in rural areas are far less used to diversity. Such a schism may be a defining challenge of the 21st century. Davin O’Dwyer

GIVE ME A CRASH COURSE IN . . .
VISA CHANGES FOR IRISH EMIGRANTS

What has been announced? Within 36 hours Australia, the US and New Zealand – three of the most popular destinations for Irish emigrants – all announced plans to restrict their visa programmes for skilled foreigners. The Australian prime minister, Malcolm Turnbull, said on Tuesday that the 457 visa for employer-sponsored skilled migrants would be scrapped as part of a strategy of putting Australia first. “We’ll no longer let 457 visas be passports to jobs that could and should go to Australians,” he said. Later that day the US president, Donald Trump, signed his long-anticipated “Buy American, hire American” executive order to review the H-1B visa scheme, which is used to bring foreign employees into the US to work primarily in the tech sector. The New Zealand government then announced plans to tighten access to skilled visas, as part of what its immigration minister, Michael Woodhouse, called a “Kiwis-first approach to immigration”.

Why are they tightening their rules? The announcements come in the context of the rise of the far right across the western world, and the spread of populist nationalism calling for tighter immigration controls. Trump promised on the campaign trail to end the H1-B visa programme, which he claims some companies are abusing to hire low-paid foreigners over American workers. Opposition leaders in New Zealand have cited housing shortages, road congestion and overcrowding caused by record immigration as justifications for the new policy. In Australia a tightening economy, particularly in mining and extraction, has led to a fall in demand for foreign workers.

Are these skilled-worker visas popular with the Irish? Yes. The 457 visa has been particularly popular with Irish construction and healthcare workers looking to move to Australia after the 2008 crash. But the numbers have been dropping: in 2016, 3,030 Irish workers and their partners and children were granted these visas, down from 4,119 the previous year, and 10,291 in 2013. In the US, 3,190 H-1B visas have been issued to Irish workers, mostly in technology, over the past five years. In New Zealand, 3,505 Irish people were granted temporary visas in 2016, a combination of working-holiday and skilled-worker visas.

What will the changes mean for Irish emigrants? We have very little detail so far about the proposed changes in New Zealand and the US. In Australia the 457 visa will be replaced with a two- or four-year Temporary Skills Shortage visa in March 2018. The number of occupations eligible for a skilled-worker visa has been reduced with immediate effect from 651 to 435. Workers currently holding a 457 visa will not be affected, but those with applications in the system, or who intend to apply, will be subject to the new rules.

Have other visa programmes been affected? Not yet. There are still plenty of opportunities for Irish people, depending on age, qualifications and experience. The working-holiday visa programmes, which allow Irish 18- to 30-year-olds to travel and work for up to two years in Australia and a year in New Zealand, will continue as they are. In Australia skilled workers may still be eligible for other visa programmes, such as the “skilled independent visa”. In the US, L visas, for specialist tech workers, E visas, for people who trade and invest with the US, and O visas, for those with “extraordinary ability”, among others, offer an alternative to the H-1B.

Will the measures curtail immigration? It remains to be seen, but opponents in all three countries have been quick to dismiss the announcements as cosmetic. Ciara Kenny

1: British government realises Brexit is a mistake, official says
2: Sisters of Charity to be given new National Maternity Hospital
3: Bad sex in the movies, from Top Gun to 50 Shades
4: The glamorous life and painful last days of Vincent Hanley
5: Martin McGuinness’s headstone ‘proves continued IRA link’
6: ‘I realised the pay difference meant I would lose €220,000’
7: How, and why, did Scappaticci survive the IRA’s wrath?
8: Una Mullally: Why do the Sisters of Charity want to own a maternity hospital?
9: First drug-driving checkpoint set up in Stillorgan on Saturday
10: Fintan O’Toole: Brexit means Ireland must be the anti-England

GRAPHIC OF THE WEEK: DRUG USE IN EUROPE

Move over chicken Kiev: a tasty new take on a retro classic
8

How will the ‘Ryanair generation’ of emigrants fare post-Covid?
9