Big ideas needn’t come from above. People work best from the bottom up 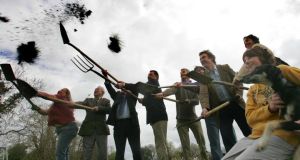 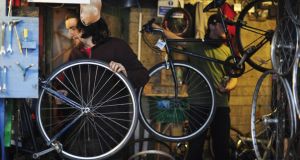 Once upon a time, if people didn’t like society they just started a new one. In the 19th century, utopian socialists such as Robert Owen, idealistic capitalists such as George Pullman and agrarian religionists such as the Shakers all established model communities. There was a belief that a good mini society might catch on, so the vogue continued into the 20th century.

Henry Ford experimented with wacky forms of government in Fordlandia, a town he established in the middle of a rainforest. In the 1930s de Valera resettled a community of Irish-speaking Connemara farmers in Co Meath. In the late 1970s Juan Manuel Sánchez Gordillo established Marinaleda, a communitarian society, in an Andalusian village. (It still exists.)

Since the Berlin Wall fell it has seemed as if there was only one inevitable system: global capitalism. Over the following decades people were convinced that, no matter how bad things seemed, there were no alternatives. (The writer Mark Fisher called this ideological pessimism “capitalist realism”).

More recently global capitalism has been a little unwell, and there are community-based grassroots initiatives all over the place. Some are more ambitious than others. Some wouldn’t even call themselves communities. These aren’t, for the most part, the self-contained utopian settlements of an earlier age. But they’re an interesting start.

Clonakilty Favour Exchange
Localised currencies are not new. Clonakilty Favour Exchange had its genesis when Bev Cotton and his wife, Miriam, attended a talk by Natasha Harty about a long-running local exchange trading system in Midleton. They developed their own version, in which the unit of currency was 15 minutes of work to be traded with their Co Cork neighbours.

“In recessions local communities feel powerless,” says Cotton. “People are waiting for decisions to be made by politicians or for banks to lend money or the economy to pick up. There’s a feeling of frustration. This was a way of mobilising resources with no permission needed.”

It began with 35 people. There are now 150 members. The favours exchanged have included voice therapy, computer debugging, drumming lessons, dog training, DIY, gardening, haircuts, computer repairs and various therapies. It’s been running for 18 months. “There was a sense of enthusiasm and joy and release in the people who joined,” says Cotton. “There’s something about the money-free relationship you strike up with people when you exchange favours that’s very freeing. The recession closes things down, and this opens them up . . . During the Celtic Tiger a lot of people didn’t even talk to their neighbours. We put a lot of effort into breaking that down. We organised social events. My hope is that those connections will continue.”

Other favour exchanges are cropping up, and local trading schemes have flourished abroad beyond recession. Cotton, who is taking a step back from the project, stresses that these initiatives work because of the hard work that people put into them. “It’s not a perpetual-motion machine. These things can’t run themselves . . . and there needs to be trust. I don’t think it can get going without that.”

Seomra Spraoi
In 2010 Dr Philip Nitschke of the Australian group Exit International came to Dublin to give a talk about euthanasia and found nowhere would host him. (He is also known as “Dr Death”.) Seomra Spraoi stepped in, attracting tabloid attention and the ire of protesters.

“For us it was about free speech,” says Sian Crowley, one of the 30 or so members of the loose collective who run the space. “And it was really interesting. He brought all these older people who would never normally be in the space.”

Occupying a former printing works on Belvidere Court, Seomra Spraoi is modelled on anarchist-run autonomous social centres across Europe. It was founded during the anti-capitalist fervour of the early 2000s by campaigners associated with the former Magpie squat on Leeson Street. (None of the original founders is still involved.)

It was established as a collectively run noncommercial space at a time when being noncommercial was considered downright unpatriotic. Despite some anarchist symbols on the walls, they resist political labelling. Crowley’s friend Conor Murphy says they’re “vaguely leftish”.

An average week sees Seomra Spraoi hosting two cafe nights (payment is on a give-what-you-can-afford basis), a bakery, a very popular bike workshop, which is filling up as we talk – “a friend called the bike workshop a gateway drug to more radical politics,” says Murphy – language lessons, film screenings, political debates and lectures.

During meetings they use a system of hand signals, popularised by the Occupy movement, to gauge opinion, and they progress only by consensus. “We’ve only voted once,” says Murphy, “and that was over whether we’d allow milk. There are a lot of vegans involved.”

Working by consensus can be frustrating, but Crowley and Murphy both recognise the survival of the space as a success in itself. Seomra Spraoi is a place where people can plug into culture and activism and live out some of their political ideals. They’d like to see more spaces like this. Not that they think it’s a model that could operate for four million people. “They’d kill each other!” says Murphy, chuckling.

Cloughjordan ecovillage
In the late 1990s a number of people gathered in Dublin to discuss a new way of living. They put out a call through the Irish Farmers Journal for a site on which to build a community, and a delegation came from Cloughjordan, in Co Tipperary, to meet them. In 2001 they bought a site there, and the first houses were built in 2009.

Now there’s a farm, the largest bank of solar panels in Ireland, which powers the village’s heating system, and a “green enterprise centre” built with the help of North Tipperary County Council. There is a worldwide network of similar ecovillages, but this was the first in Ireland.

About 135 people live there, including Peadar Kirby, professor emeritus of international politics and public policy at the University of Limerick. He was initially a bit resistant to his wife’s desire to move there.

“I worried about the balance between the public and the private. Would I find people calling into me at all times of the day and night? Would my house be seen as a sort of public place? Those fears have been completely unfounded. It is a lively community – last night we had an 80-year-old North American indigenous elder who came to tell stories – but we all have the private space of our own houses.”

Some of the inhabitants are here for personal lifestyle reasons – “it’s a pleasant place to live,” says Kirby – but many are also trying to model a new way of living. “They’re trying to live a life they feel is the only viable type of life for the future of this planet.”

Residents pay a community-development charge to the co-operative, then buy their homes individually. Everyone is responsible for the communal space and infrastructure. “There are meitheals every weekend, putting mulch around trees, cutting grass and building paths,” says Kirby.

Decisions are made using the “viable-systems model”, an organisational system developed by Stafford Beer, a British academic, in 1972. No decisions are made except by consensus. There are no votes. “We often go at the pace of the slowest,” says Kirby. “Some get impatient with that, but . . . you don’t build a community without constantly tending to the tensions and conflicts that inevitably arise.”

Things aren’t perfect. There’s planning permission for 130 units, but only 55 are built. The project coincided with the downturn. Some who bought into the project can’t afford to build their houses. There are issues with debt. “There are real challenges,” says Kirby. “We live in the real world.”

Beyond these issues he sees a bigger political context. “We fit within the long history of ‘intentional communities’ – people who come together with shared objectives. We’re attempting to model sustainable living for the wider community.”

He believes that, in Irish society, top-down processes of change need to be complemented by practical initiatives from below. “There’s a disjuncture between what science is saying about climate change and what political parties are doing about it,” he says. The status quo “is unrealistic and unsustainable, but we live at a time with no big alternatives. Neoliberal hyperfinancialised capitalism seems the only show in town. So things like this are crucial. They put out the seeds from which new alternatives will come.”

From the ICA to GIY: Other grassroots groups
Irish Countrywomen’s Association: Despite more cosy associations in recent times, the ICA has been a crucial voice for the rights of rural women.

Educate Together: A growing network of secular schools.

Belong To: A youth service for young LGBT teenagers with branches now spread around the country.

GAA: Okay, now it’s a culturally powerful institution, but it grew from the grassroots and still thrives there.

Credit unions: In the 1950s credit unions began providing community-based lending to people ignored by mainstream banks. They still have a key role in communities around the country.