The night mart: ‘It’s cheaper than the pub’

Welcome to Gort mart in Co Galway, a world of coded language, hand signals and few women, where the bidding is ferocious and no seller wants to go first 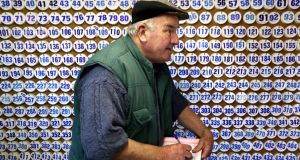 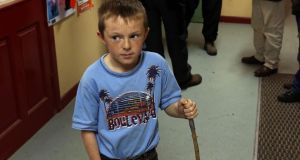 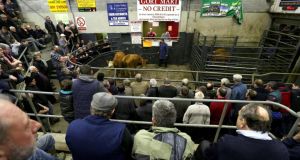 The former mart at Gort in Co Galway used to be in the town centre, but it got too small. There’s now a supermarket where the old mart was, and the new one is located in countryside two miles outside the town.

On Wednesdays, the mart deals in sheep. On Thursdays it’s cattle. The Thursday cattle mart, which I attended, is at night, from 6pm to 11pm, depending on the number of stock due to be sold on any particular night.

The registration plates on the cars, jeeps and lorries in the vast car park at the rural site suggest that some buyers and sellers have travelled from afar for the occasion. There are vehicles from Mayo, Wicklow, Donegal, Roscommon, Meath, Offaly, Dublin, Clare, Cavan and Tipperary.

Three of the local farmers attending tonight are Tony Diviney, Pat Lahiff and Michael O’Donohue. They farm lands of 120, 125 and 141 acres respectively.

There are two rings inside the mart, one for selling heifers, the other for bullocks and bulls. Tonight there are some 300 animals being sold. Both areas are crowded, with some 300 people moving between the two rings.

“It’s cheaper to spend the night here than in the pub,” Lahiff jokes, pointing out regular attendees, whom he says sit in the same place on the tiered concrete bleachers each week.

“It’s a social occasion for some people,” says O’Donohue. “It’s a night out. You’d often see the same fellows sitting beside each other every week.”

I am virtually the only female present. Even the children – and there are several – are male.

“There is nothing banning the women from attending,” Lahiff points out more than once when I comment on this. “And there are women farmers selling stock here tonight, although they’re not here themselves; someone else is representing them.”

Coded language
There is a coded language attached to the business done at marts. Most people are sitting on the tiered seats. A small cluster of others is crowded up against the rail that separates the public from the ring where the cattle pass through when their turn to be sold comes.

“Most of those are the dealers,” Diviney explains. Over the course of the evening, I learn a little about dealers. They all know each other. There are about a dozen of them each week at this particular mart. Everyone knows who they are. Some are buying stock on behalf of clients who don’t have the time to attend the mart themselves. Some are buying stock to sell on abroad, usually in Italy or France.

My inexperienced eye takes a while to notice the signals made by dealers to the auctioneer. It may look as if forefingers are barely being raised in the tiniest of movements for the shortest of time, but these actually constitute bids that prompt the auctioneer to bark another figure. A forefinger lifted and held means the dealer is signalling his intention to bid on the next animal, and he’s hoping nobody else will bid against him as a result.

“The other dealers probably wouldn’t bid against him, but there’s nothing to stop farmers bidding,” Diviney says.

Like all auctions, the speed of the bidding and the through-movement of the lots is ferocious. The mart is particularly busy at this time of year, as some farmers want to get rid of stock before winter. “It costs as much to maintain one cow for a year as you’d get from selling the calf the following year,” O’Donohue says. “And you’re guaranteed to be paid at a mart,” Lahiff says.

Everywhere are prominent signs that read: “No credit.”

There are about 20 pens where the stock is held before being brought into the ring. The contents of each pen are then auctioned, in numbers one through to 20. As nobody ever wants to go first and be the template for the pricing of the remaining stock, lots are drawn to decide who gets which number pen.

“The draw system is to make it fair for everybody,” says Lahiff.

Regulation
They all say that the marts are far more regulated and orderly than in the past. For instance, information about provenance is much clearer. A computerised board displays various details about the animal being sold: its lot number, weight, age, name of owner, and what tests it has had.

At all times, there are animals in the holding pen, waiting to come into the ring, one or two in the ring, and sold animals in a second holding pen. Some bids are completed in less than a minute – so quickly that I’m often not sure which animal has just been sold and which is now on offer.

A Hereford heifer goes for €1,180. “That’s a reasonably good price, but farmers are never satisfied,” he says.

After two hours at the mart, I comment again on the lack of women present. The three farmers look around them.

“There’s a woman,” O’Donohue says with something like relief, indicating the sole other female in the place (not counting those working behind the counter in the on-site cafeteria), who has just walked in. “She has her calculator out doing her sums.”

He says he thinks she might be figuring out what she can afford to buy at the mart. I go over to look more closely. She is not holding a calculator. She is scrolling through Facebook on her smartphone. Which means, that as far as I can see, every buyer at Gort mart on that evening has been male.