The Index: What’s hot and what’s not this week?

We love Brendan Gleeson as Trump, and big-star memoirs; Insta-interiors and commuting are leaving us cold 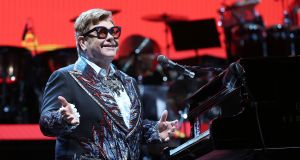 Elton John. His memoir, Me, is out now. Photograph: Laura Hutton/The Irish Times

Piggy Bag The Legal Eagle in Dublin 7 is serving up a bag of chips, bacon dust, battered sausage, brawn fritter and black pudding

Brendan Gleeson as Donald Trump An acting curveball no one expected

AirPods Two years on, they’re an accessory phenomenon, but ultimately another piece of silly e-waste

Insta-interiors Don’t be driven by scrollable trends, find your own style

Jared Leto How quickly his version of the Joker is forgotten

Pets outdoors The Halloween fireworks have started, so bring them inside

‘I’m going to ask you something,’ Sorcha goes, ‘Have you two been sleeping together?’
10