The new cast of Joseph and the Amazing Technicolor Dreamcoat are preparing to close their eyes, draw back the curtain, to see for certain it still packs them in. But why? 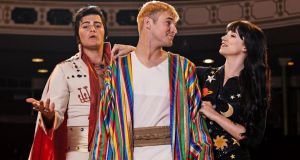 We are just going in to Any Dream Will Do, one of the many hits from Joseph and the Amazing Technicolor Dreamcoat. “I closed my eyes . . . ” sings Lloyd Daniels, who is playing Joseph. “Twinkle,” instructs Bill Kenwright, the producer and co-director. “Twinkle.”

Lloyd twinkles as best he can, which is pretty good twinkling. But he doesn’t twinkle quite as consistently as Danielle Hope, who is playing the narrator, a part usually played by a man.

The dancers in rehearsal on this sweltering London day, on the other hand, aren’t twinkling any more than is strictly necessary.

You think you don’t know all the words to Joseph, but, trust me, you do.

“We’re working on butch,” says Kenwright. He has been at the heart of British musical theatre for some time as a renowned producer, theatre proprietor and impresario. He is also chairman of Everton Football Club. Among other things, he brought Dancing at Lughnasa to Broadway, where it won a Tony Award. He has a couple of musicals running in the West End at the same time.

This year he had to take off one of his musicals, Fame. “And I don’t take shows off,” he says. “But I’ve never known it so odd as it is now. I don’t know why. They say Easter was late this year, and then we had two bank holidays close together, and we hate bank holidays. Then we were in to the World Cup. May is always a bad month, with producers tearing their hair out, but this year there was blood in the streets.

“I’ll do it again. It was good. I waited years to get the rights to Fame.”

But when Joseph graced the scene / His brothers turned a shade of green.

“Joseph’s legend in provincial theatre will never be equalled,” says Kenwright, as he puts the cast through their numbers one more time. “This is the 50th time I’ve gone into rehearsal with it.”

We are in a rehearsal room in west London. Off to the left, behind the curtains, hang lots of what look like dreamcoats. It turns out these are just the run-of-the-mill costumes. There are only three parts for females. God knows the Old Testament was never an equal-opportunities employer.

The colours faded into darkness / I was left alone.

Daniels is already wearing the dreamcoat and, strangely in this heat, a pair of Ugg boots. Hope steps out from behind the curtain with a blazing smile. They are getting their publicity photographs taken.

“Put your arms round each other,” says Kenwright, or maybe it is Henry Metcalfe, who has been the Joseph choreographer from the start, and in this production plays Jacob and Potiphar.

Hope is a trooper. According to the press release, she captured the hearts of the country when she won BBC TV’s Over the Rainbow and became Dorothy in The Wizard of Oz. Then she was Éponine in Les Misérables. She knows what is required. “I don’t get to marry Joseph, sadly,” she says, as the photographers snap away. She is trying to jolly things along: the photographers couldn’t care less.

For the first time, Joseph, which can pull audiences and make fortunes with no star names, has three star names on its posters. The last time there was a photograph on the show poster, says Kenwright, it was of the late Stephen Gately. Daniels, a nice young Welsh man, won The X Factor in 2009, when that programme was at its peak, with 10 million viewers. He was 16. Now he stands for the photographers, looking optimistic and very thin. Kenwright says he watches The X Factor every week.

Touring with Joseph involves two shows a day for a 26-week stint and sweating through rehearsals. “I pretty much have to wear the loincloth, so I’ve been working out as well,” says Lloyd.

Dancing on Ice finalist Matt Lapinskas, who played Anthony Moon in Eastenders, is the Pharaoh in the second half of the show, and one of Joseph’s nameless and numerous brothers in the first half.

Lapinskas has been a terrific sport about playing the two roles, says Kenwright.

“I didn’t read my contract,” says Lapinskas, who looks dynamite in his Elvis suit and boots, the traditional costume for playing the Pharaoh.

No one has rights or a vote but the King/ In fact you could say he was fairly right-wing.

Joseph was originally written to be performed in a school, and it remains refreshingly juvenile, even on the subject of the dreamcoat itself.

When Joseph put it on / He knew his sheepskin days were gone.

“It’s one of the few shows where you can have a three-year-old and an 80-year-old sitting side by side enjoying themselves,” says Kenwright.

But then he also says, “It’s a love story. It’s about brotherly love”, when, in fact, his brothers are murderously jealous of Joseph.

“I originally picked it up because a tour of A Chorus Line fell to pieces,” says Kenwright, who seems unprepossessing and frank; only people’s total obedience to him hints at his power.

It was someone at a theatre in Cardiff who suggested he do Joseph instead. He originally took out a licence on the rights for just two weeks. That was in 1979.

Even Kenwright can’t explain the appeal of the show.

He runs through the tour routine instead. “Everywhere we go, we have a local choir [in the production], and it’s a thrill for them,” he says.

The show has provided thousands of people with their first experience of theatre. It packs houses so consistently and efficiently that one director of a theatre in Sheffield told Kenwright that “having Joseph on was like an Arts Council grant” – and that’s a British Arts Council grant, which is actually worth quite a bit of money.

The key to Joseph, says Kenwright, is what he calls its come-back-ability. On any given evening most of the audience for Joseph will have seen it before. And that’s new in musicals.

Time was, says Kenwright, that if the film of the King and I had been on television recently, then your touring production of it was finished. No longer. Television feeds musicals in the theatre. Next year, Kenwright is launching a new production of The Sound of Music to celebrate the 50th anniversary of the film.

“The provincial audience is a conservative audience,” he says. “They like to know what they’re getting. They like to feel safe. Joseph has never not got a standing ovation. Evita has just had the biggest tour ever in its history.”

“My mam saw it,” says Lapinskas.

Sealing the deal: how to buy a house at the right price
3

Buy yourself a dream... with the planning headaches sorted
6