Tanya Sweeney: You get a lot of brain space back when you stop hating your body 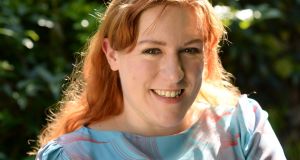 Tanya Sweeney: ‘I won’t be trying to outsmart my body with punishing diets or regimes, as I’ve done before. My body gets me from A to B with minimal fuss, and that’s good enough for right now.’ Photograph: Dara Mac Dónaill

I felt beautiful, the way you do when you’re at the beginning of a great relationship. You see yourself anew, through the eyes of someone falling in love with you, and you feel that you’re glowing. At the beginning of my relationship, I took a train to Kilkenny, to meet some of my new boyfriend’s friends. I must have looked pretty happy with myself, which would explain why the frail looking octogenarian sat next to me, in an otherwise empty carriage. As I open my laptop, he gestures towards me.

“Where are your people from?” he demands to know. With that, we are off to the conversational races. This feels nice, I think, talking to random strangers.

A few stops out from Kilkenny, I excuse myself to go to the toilet. The overhead light is merciless in its appraisal, but it’s still a good face day. My hair’s doing what it’s supposed to. All in all, a notch above presentable.

As I return to my seat, my new friend visibly has something on his mind.

“I was going to say this just as we were getting off the train,” he starts, motioning me in towards him. I smile back expectantly. Is he going to offer me some wisdom about romance or life? Some nugget of advice I can carry around in my pocket?

He’s searching for the right words. “You’re a beautiful girl…” he starts, putting a hand to his wizened neck. “But only from here up.”

I’ve never been part of a conversation that feels like a slap from a wet fish to the head, but here we are. My mouth drops open a bit.

“Even you must know you need to do something about the rest,” he continues.

He lets that between us for a second. I can feel tears of shock and fury start to wibble on my size 14 eyelids. He is talking to me as though he has caught me doing something awful or transgressive, like nipping whiskey from a flask at 11am, or sneaking a line of cocaine off my train ticket.

‘So when are you going to tackle that weight of yours?’ he demands, cocking his head as though I’m a pupil resolving to try harder with my homework

He takes the tears as some sort of gesture of concession on my part, as though he’s found a spot of weakness barely known even to me.

“So when are you going to tackle that weight of yours?” he demands, cocking his head as though I’m a pupil resolving to try harder with my homework.

I wordlessly flee to the toilet. It’s only when I see my boyfriend, excited and happy at the train station, that I feel okay again.

This happened five years ago, and my reaction to that very moment irritated me for months afterwards. What I should have said to him was that, to borrow the title from Florence Given’s book, women don’t owe you pretty. We certainly don’t owe you thin. And any man offering up an unsolicited opinion on a woman’s body, good or bad, is – well, a bit of a creep.

I’ve often heard body activists mention that people have a problem with plus-size women taking up physical space in the world, but I think it’s something else. When some people see a curvier woman, they appear to psychologically equate this with a lack of control.

Specifically, a lack of self-control. And for some, there’s nothing more scary in this world than a woman without control.

There are so many variables that people aren’t taking into account when making snap judgments of other people’s bodies – psychosocial, cultural, genetic – that the whole do-something-eat-less-move-more reaction doesn’t cut it anymore.

The fact is, were I to take the same train journey today and have this same conversation, I’d probably laugh in the man’s face and call him a daft old duffer who should mind his own business. Perhaps it’s because I’m clean out of mental bandwidth, I have other priorities, or I’m living with someone who doesn’t openly gag when I take my clothes off, but I couldn’t give a monkey’s about being overweight right now. I have reached a place of genuine body neutrality. I often plan to get more active, but I won’t be trying to outsmart my body with punishing diets or regimes, as I’ve done before. My body gets me from A to B with minimal fuss, and that’s good enough for right now.

Women, you wouldn’t believe the amount of brain space you get back when you stop hating your body. How much energy you save when you stop looking in the mirror and wishing for parts to look different. How liberating it is to buy clothes you like, without worrying about how forgiving on “problem” areas they might be.

Last week, on holiday, I bought a dress in a boutique. “Oh, this is a very flattering cut,” remarked the boutique owner, folding the dress in tissue paper. “Flattering” is never an adjective used around a thin person. But no matter. I smiled and took the bag. She meant well. I felt great in it – and that’s all that matters.

Rambling house on the Hill in Monkstown for €1.95m
6

Aortic dissection: Getting to the heart of the matter
9