The Trip: Flor de Toloache are New York’s only all-girl mariachi band. I join them for a day of music and sisterhood – and food theft – as they travel to a show in a Hispanic neighbourhood 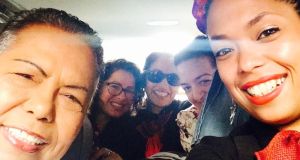 Maeve Higgins in the car with Flor de Toloache 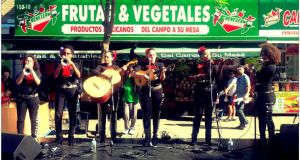 Flor de Toloache performing at the Oye Corona festival in the Hispanic neighbourhood of Corona in Queens, New York 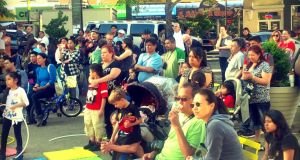 The local crowd watch the band in action 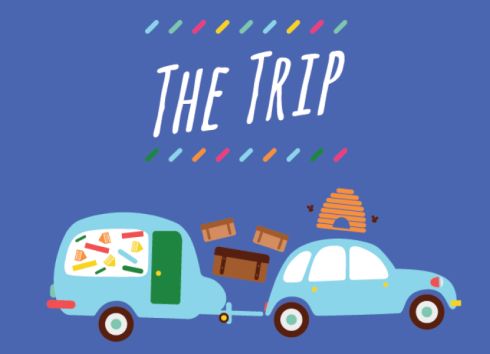 It’s summer in New York and I am about to go on a road trip with a band. The 14-year-old in me is so impressed by that statement she wants me to light up a cigar and take the rest of the day off. Well sorry, Four-eyes, I don’t smoke and I’ve got a train to catch.

I get on the Q from Brooklyn to Penn Station with a delicious school-tour feeling I haven’t had since the last time I went on a school tour. Cobh to Trabolgan in 1992: Baby, don’t act like you don’t remember. I stand on a corner of 8th Avenue, giddily peering into passing cars. I’m looking for my fellow trippers: Flor de Toloache, the city’s only all-girl mariachi band, are picking me up on their way through Manhattan from New Jersey. We are spinning up to Queens for a day out. They’re going to play a set, and I’m going with them.

I’m already grinning at the prospect when I squint into a pick-up truck and take the driver, a gentleman with a ponytail, by surprise. He makes a little meowing sound before regaining his composure quickly enough to pat the seat beside him and say something in Spanish. I don’t have time to figure out what he means because I spy an old white Mercedes three cars back that appears to be full of women wearing black. I jump in the back seat.

As I jam myself between band members, handbags and instruments, Mireya Ramos, the band’s founder, introduces me. Her mother, Carmen, their unofficial mascot and roadie, sits up front, cracks jokes and hands out chocolate-chip cookies as the car slowly progresses through midtown traffic.

“I try to keep the girls happy,” she says. “It’s hard but I try. There are 10 of them so you can imagine, claro, it’s explosive. Especially at that time of the month.” Her eyes widen in mock terror in the rear-view mirror. The trumpet player, Julie Acosta, adds: “We did a trip to California and we were together in one house for 10 days, and we came back and everyone was synchronised. It’s true, it happens, but Carmen always has yummy snacks.”

We take 36th Street across town as the traffic worsens. Mireya calls the band members not already in the car, as well as the event organisers, to say we are running late. As we exit the midtown tunnel to Queens, the girls in the back choose silver earrings to complete their outfits. The band have a distinctive look: black trousers with jangly silver buckles down the side of each leg, fitted black waistcoats and white shirts buttoned to the top, fastened with a red moño, an oversized, droopy bowtie.

Julie rummages through a little bag stuffed full of artificial flowers. “A lot of times people are like, ‘Oh where are your Mexican hats?’ And I’m like, we’re girls, we like to wear flowers.” I hear an incredibly loud fart and turn to see who did it, astonished and impressed, only to realise it wasn’t a fart – it was Julie loosening her mouth out for the trumpet.

Mariachi music is largely played by men, and is still associated with a certain kind of Mexican machismo. Mireya began to put her band together in 2008. “I was playing mariachi and saw that there weren’t many women playing. There were women, but they all played with male groups.”

Many members of Flor de Toloache came from other musical backgrounds and learned to play in the mariachi style. As well as filling a gap in the market, they have created a strong bond, according to Julie. “We all hang out – we invite each other to our other shows,” she says. “It’s a support system, a really cute support system.” The girls are so comfortable and funny together that I forget we’re actually on the way somewhere. The trip itself becomes the thing, the destination is somewhere in the future.

We are almost at Corona Plaza when I ask Veronica Medellin if she is in any other bands. She speaks in a low voice with the coolest accent I’ve ever heard. “I’m in a Russian band, a rock band. It’s like, drunk songs, you know, gypsy rock.” Veronica is the only member of the band who actually grew up in Mexico. She plays the guitarron, the Mexican bass, with Flor de Toloache. “I never thought that I would play in a mariachi band – you always want to play something else, not your own music. I know the music, and I love it, but until I got here, I didn’t want to play it.”

She sighs before continuing. “But it makes me feel at home a little bit, and it’s the music that comes to me very naturally, your own music.”

It makes sense, then, that the band are booked for the event in the predominantly Hispanic neighbourhood of Corona. The community is largely made up of immigrants from Mexico, Ecuador, El Salvador and Peru. Oye Corona is a monthly cultural celebration held in Corona Plaza, a corner of the world that was until four years ago an abandoned parking lot. The event, produced by the Queens Museum, is billed as “a celebration of art, music and exercise in diverse forms and an opportunity to uplift our spirits with inspiring messages”. This is code for a really good party in the plaza, a small concrete triangle hemmed in by Roosevelt Avenue and 103rd Street, both busy streets of food trucks, nail salons, and flashing storefronts advertising psychic readings in Spanish and English.

We unfurl out of the car to find the rest of the band and go exploring. About 300 people are gathered. Some sit in plastic chairs in the shade of a few tall trees, some dance to the salsa music blasting from speakers. The music is drowned out every few minutes by the train clattering overhead. Kids are hula-hooping and the sun is shining.

There are long picnic tables of art materials for a printmaking workshop with local artists. There is a stall distributing multilingual information on the new Affordable Health Care Act – the date for registering for “Obamacare” has passed but the volunteers explain that another opportunity will come around in November. There is an exhibition run by Project Luz, a local organisation that teaches photography to Hispanic immigrants so that they can record and reflect their own communities. The photos are elegant, candid portraits of people, mainly women, at work in food trucks, cigar factories and hair salons.

Miss Saturn, a leotard-wearing hula-hoop instructor, has formed a line of thrilled, spinning children. A Corona resident, Tania Turcinovic, shouts encouragement from the sidelines. “Good job, Blue Dress, you’re killing it.” I follow her gaze to a Dora the Explorer lookalike, her face impassive, her body barely moving as she somehow twirls two hoops around her tiny frame.

I’m (eating) with the band

I feel guilty eating the food laid on for the band, especially considering I have already had lunch, but it’s just so delicious. As we eat, we commiserate with Shae Fiol, another singer, who also plays the vihuela, a type of early Spanish stringed instrument. She has a sore throat and a rash. I don’t notice the rash but Carmen does. “Oh dear, all of your face is bumpy, no?”

Nonetheless, Shae lights up when she talks about playing mariachi. “It’s a real pleasure to grow with the music. It’s an adventure. The vocal style is so passionate, it’s easy to fall in love with it.”

Turns out Shae is right. The band play a rousing set that manages to be poignant and witty at the same time. My favourite song is Las Chanclas. Mireya introduces it while Shae sips water and holds her throat for a moment.

“It’s about a man who keeps changing his mind about whether or not he loves you, a flip-flopper, you know?” I do know. Flip-floppers are the worst. During the song, Mireya and Shae make a sound, a loud “oo-ee”, that is halfway between a laugh and a cry. Couples sway, tired- looking men in high-visibility vests stop to listen, old ladies keep time with their feet. Many people sing along. It’s beautiful and sad in the way that music can be when it’s far from home.

Alexandra and her volunteers dismantle the exhibitions and stack the chairs. They will be back next month with different artists and musicians, making space in a new land for people to call home. Flor de Toloache pile back into the car and I wave them off, a jumble of black and white with bright pink smiles on their way back to New Jersey. I buy mango slices for a dollar and get the train home. The only sign of a day full of music and sisterhood is a flower in my hair, because I’m a girl and I like to wear flowers.

Loved: The music, the camaraderie, the photography exhibition, the reclaimed public space.

Hated: The hula-hooping. My hips, it turns out, do lie, particularly when they say they can hula-hoop.

Would I do it again? Ah, yes. I want to follow Flor de Toloache everywhere.

NEXT MONDAY IN THE TRIP: Kathy Sheridan takes a bus around Cork and Kerry