Should Ross O’Carroll-Kelly replace Tort with the Cort?

‘Ross is a true south Dubliner. He should be at bottom of Grafton St, looking at his people’

Paul Howard speaks about the online petition to replace the Molly Malone statue with Ross O'Carroll Kelly, at the bottom of Grafton Street. Video: Daniel O'Connor 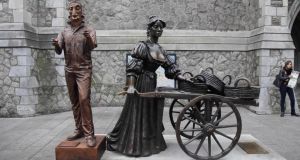 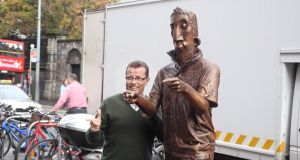 Author Paul Howard beside the Ross O’Carroll-Kelly statue at the bottom of Grafton St. Image: The Irish Times 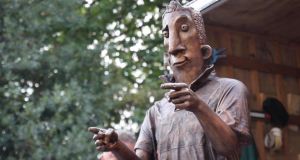 A statue of Ross O’Carroll-Kelly which author Paul Howard is hoping will take up residence at the bottom of Grafton St in Dublin, at the old site of the Molly Malone statue. The Ross statue was arranged by Penguin Ireland to promote the book ‘Keeping up with the Kalashnikovs’. Image: The Irish Times

On the way to Grafton Street for the grand unveiling of the statue of D4’s most famous son, Ross O’Carroll-Kelly, I pass a young lady wearing pyjama bottoms, sporting a Michaella McCollum Connolly top-knot and eating an unidentified foodstuff that is leeching grease onto the paper bag she is carrying.

Turns out it is.

John O’Connor has popped out of Boylesports to see what all the kerfuffle is about. Does he recognise the oik who’s taken Molly Malone’s spot outside his shop?

“Nope. Nothing.” At first O’Connor has no idea who Ross O’Carroll-Kelly is.

Do punters ever use his establishment to place wagers on games of rugby football?

They do, he says, although the horses still romp home in top spot. “Now you say it, I do know who he is. He’s done in a cartoon character, isn’t he?”

Loreto College Cavan pass in a gaggle of giggles. Nothing. Hardly RO’CK-land up there in Border country.

Liam Whelan knows who Ross is, all right. But the Walkinstown man is not at all happy.

“If you are going to get rid of Molly Malone, you have to replace her with someone who represents the whole of Ireland. It’s not fair to have someone who’s representing Leinster only,” he says. “You should have Munster, Ulster and Connacht represented too.

“And I support Leinster.”

Paul Howard, Ross’s creator, is there to admire the great man’s likeness in fake bronze.

“He has no cart. He has no cockles, but he has muscles,” says Howard. “Ross is a true-blue south Dubliner. He should be at the bottom of Grafton Street, looking at his people.”

Those who agree with Howard can sign the petition to “Replace the Tart with the Cart with the Ledge with the Wedge”. There are already more than 600 signatories. Howard says the plan is to keep it going until Christmas. “Then we’ll present it to Dublin City Council, ” he says.

Howard is hopeful that Dublin’s mayor, Sinn Fein’s Christy Burke, will accept the petition. “He is D4, after all.”

Janine Briscoe has just finished training to be a Montessori teacher at St Nicholas College, Ballsbridge. She is a former pupil of Loreto Balbriggan and admires Ross from a respectful distance.

“He’s fantastic. I love him. I’ve read all the books,” she says. “Ross would love that statue SO much.”

Luke McVeigh says Ross O’Carroll-Kelly’s antics have allowed him to catch up on the 13 years he missed living in Tenerife.

“I was at the play Breaking Dad a while ago. I am well-versed in south county Dublin culture from spending the last three years at Trinity College, ” he says. McVeigh has a bag stuffed with cans of Red Bull. He toys with the idea of leaving one at the foot of the statue. One suspects Ross would approve.

Ross O’Carroll-Kelly would love to take up a permanent spot near one of his favourite watering holes (Lillie’s Bordello) and favoured retail outlets (Brown Thomas), says Howard.

But there are a lot of bemused tourists wandering about (and wondering about) this fine figure of a man.

“Where is Molly Malone?” Bente Bregendahl from Denmark asks me in my new role as Dublin tourist guide.

Never mind all that, says Howard.

If the campaign succeeds, Ross O’Carroll-Kelly is going to have one shiny backside by the time we’ve finished with him.