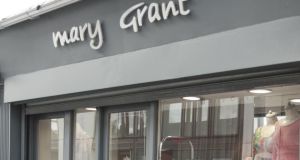 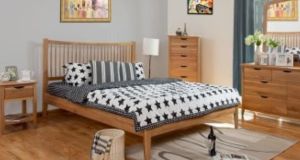 Furniture shop Michael Murphy has been in business for 42 years. Now run by son Joseph Murphy, the business expanded in 2014, opening shops in Sandyford and Wexford. 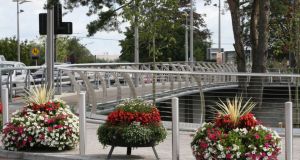 Newbridge has established itself as a nexus where country and city folk can meet, away from the madding crowds of Dublin

Situated on the banks of the Liffey, Newbridge, Co Kildare’s largest town, has a pretty river walk and can claim troubadours Christy Moore, his brother Luka Bloom, and Donal Lunny as local heroes. The town wears its musical heritage lightly but fans of the Moore brothers can nip into Cosgrave’s Pharmacy and inhale the atmosphere, for it was here that Mrs Moore once ran her shop.

A thriving centre, it has been perceived to live in the shadow of nearby neighbour Naas. While both have seen some closures in recent years, Newbridge has established itself as a nexus where country and city folk can meet, away from the madding crowds of Dublin, but in a shopping environment that offers a real sense of a day out.

The Whitewater Shopping Centre, Ireland’s largest regional shopping centre, which opened in 2006, has been a huge success and in some ways dominates the town, cursing it with traffic jams at certain times. The upshot is that the place has thrived during the recession, drawing customers west from Dublin and east from midlands.

There’s money here too. A lot of it is racehorse money that is spent quietly by many who enjoy working a look that says anything but “look at me”. Here world-class trainers and owners go about their business unremarked upon but not unnoticed.

The Key Cobbler is owned by Stephen Dwyer whose secret weapon is his talented and affable father, Tom Dwyer, a cobbler of the old school who honed his craft working with Tutty’s hand-made shoe specialists in nearby Naas and who refers to customers as “sweetheart” in a charming way. Dwyer snr is 71. While the business does key cutting and locksmithing, the shoe side is mostly repair to ladies footwear and jockey’s riding boots. Prices for a pair of stiletto heels cost from €8.00 to €12.50.

The visitor centre at Newbridge Silverware attracts 350,000 consumers per annum.The household brand made its name selling cutlery and you can still buy some beautiful vintage-inspired sets and have each piece of flatware monogrammed for an additional cost of €10. It has expanded into jewellery – a campaign fronted by supermodel Naomi Campbell – and watches, of which brand ambassador and Ireland full-back Rob Kearney is fond. Its homeware offers pieces like the ceramic Whitewear Collection three-piece coffee set, €40, and appetizer set, €35, comprising two serving bowls and a bamboo tray, all pictured. Newbridge Silverwear, Athgarvan Road, Newbridge, Co Kildare, 045-431 301, Newbridgesilverwear. com

Fashion designer Mary Grant has been in business since 1993 when she first sold in the Irish Design Centre in Dublin’s Powerscourt Centre. She was stocked in over 30 shops by 2011 but with the recession she decided to take the brand in another direction and opened in Newbridge as a pop-up. Her 1990s aesthetic is back and her shapes are now chiming with a second generation. Mary Grant, 5 Milford, Newbridge, 045-405 006, marygrant.com

Verenze shoe shop has been trading in Newbridge for the last four years, having moved from Portlaoise where owner Sandra Courtney ran a successful business for 15 years. Like many of the other independents in the town, her customers travel from as far away as Clonmel and her former base to buy her stock of Italian brands and her Amy Huberman collection which, she says, draws the 20-somethings. Many of her customers have climbed down from their heels to brogue-style flats.

However, for the vertiginously challenged, she suggests strap wedges in cherry red or neutral taupe, €185, to provide some ankle support. Verenze, 14 Cutlery Road, Newbridge, Co Kildare, 045-449 459

Furniture shop Michael Murphy has been in business for 42 years. Now run by son Joseph Murphy, the business expanded in 2014, opening shops in Sandyford and Wexford. Murphy is designing as well as manufacturing for the stores, travelling to Vietnam, China, Malaysia and Poland. This oak Henderson bedroom set with a 5ft bed is down from €799 to €399 and a seven-drawer chest is down from €1,099 to €549. Michael Murphy Furnishings, Edward Street, Newbridge 045-431868, michaelmurphy.ie