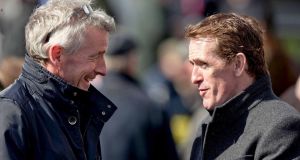 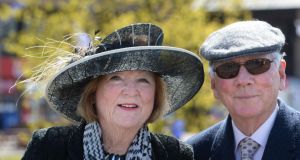 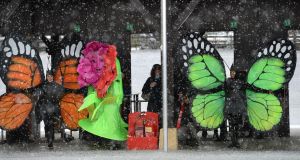 All that was missing was a plague of locusts on day two of the Punchestown festival. Lightning flashed, thunder rolled and a storm of hailstones produced a fine white carpet on the parade ring.

Three men energetically brushed the hailstones away from the parade ring before the horses began filing in. Punchestown veteran Alan Redmond said he had never seen anything like it.

“They’ll be talking about this in 60 years’ time,” he said. “This is unreal. Older people have seen snow here all right – I think they lost a day to snow in the 1950s – but hailstones, that’s a new departure.”

There is a poignant twist to the tale. Redmond’s friend Mark O’Hanlon, of Irish Thoroughbred Marketing, had encouraged him to ride in Friday’s charity race.

But O’Hanlon died last month, after having a heart attack and needing kidney dialysis. His colleagues donated the Trundley painting in O’Hanlon’s name.

Opposite his stand, Kiwi Country Clothing was making a dramatic claim. “Fanny and Freddy Adams – the most comfortable underwear in the world,” it proclaimed.

Elizabeth McGuinness was standing by the assertion.

“I sell them to rugby players, RTÉ personalities, even a couple of boys working on the Luas,” she said.

“Anyone who wears them never goes back. There’s no VPL (visible pantyline). You can wear them under a skinny dress and you see nothing.” She also sells fur, so she likes to tell people: “I’m all fur and a little knickers.”

There was a run on her raincoats and hats as the rain bounced off the tented village. But it would take more than a bit of weather to quell the enthusiasm of the racegoers.

“I’d love to come back with all my mates,” she said.

And did she have any racing tips? “No, I wouldn’t have a breeze.”

She could have taken the advice of Kathleen Watkins, who only backs a horse if she likes the name.

“And I’ve been just as lucky as those who listen to the tipsters,” she said.

Watkins, and husband Gay Byrne, were looking forward to taking the summer off.

“We’ve just done 41 shows all around the country,” she said. “Gay does a one-man show and I do 10 minutes of poetry.”

So no retirement in that house? “Don’t mention that word,” she said, glancing in Gaybo’s direction.

The veteran broadcaster was speechless. Literally. Had he just discovered the meaning of life after years of presenting the show of the same name? The truth was more prosaic, according to Watkins.

“His voice started going last night,” she said. “And there it is, gone.”

“I can’t talk to you,” he croaked, pointing at his throat. Then the couple dashed inside before another weather event struck.

Based on Watkins’s betting advice, Looks Like Rain Ted should have won the first race. But it didn’t.

Who’d have bet on that?

Building bridges: How polyamory made me a better friend, lover and person
9