‘Writers are like mongrel dogs. They lick everything off the ground’

Michael Harding: ‘If I ever saw that poet again,’ the ferryman said, ‘I would gladly take him on board, but he would never reach the island’ 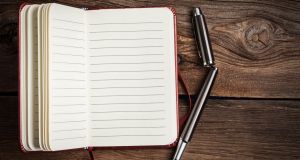 I came in contact with many great writers by journeying to various islands and remote corners of west Cavan.

When I was a boy, storytelling was an exclusively male activity. A world of literary heroes on barstools in Dublin pubs, or shamanic poets skulking around on remote islands off the west coast.

In fact, many islands had their own resident genius; some tufty-headed raging boy wandering around in a mist of grief.

There were no creative writing courses back then, so the way to learn the trade was to sit at the feet of some distinguished rogue and act as a devoted waiter for a few years, while the empty whiskey bottles mounted up in the wardrobe.

I came in contact with many great writers by journeying to various islands and remote corners of west Cavan but there was one journey in particular that I will never forget.

I had just begun a teaching job, but deep down I dreamed of writing books, and so I resolved to land on a certain poet’s doorstep and tell him that I wanted to follow his path.

I had read enough biographies to know that such is the way a writer passes on his insights and craft to another younger man. And it was always a man. Even enlightened women drenched in patchouli oil and wearing baggy jumpers or tie-dye kaftans were forced to sit on the floor while men took the couch and recited their own poems with stunning self-absorption.

So off I went one summer morning in a Ford Escort, to find a great writer. At the coast, a ferry was poised to carry visitors in to the island. But the boat was empty. Just me and a bronze-faced captain undoing the rope that bound the boat to the mainland. As we left the harbour, he stood at the tiller, guiding the vessel towards a choppy blue sea.

“I hear there’s a writer on the island,” I declared. As if it might be a compliment to the natives that a great man had deigned to live among them.

The ferryman looked at me as cold as a fighter pilot lancing the skies above enemy territory. But he didn’t reply. I had long brown hair, and was carrying a rucksack. I wore short pants, flip-flop sandals, and a green sleeveless tee-shirt.

“It must be amazing to have a poet living on the island,” I persisted. The ferryman stared at me for a long time, as he held the tiller, and looked into the clouds beyond us.

“Writers are like mongrel dogs,” he said, “they lick everything off the ground.”

“Lick what?” I wondered.

His eyes glared at me with a fury I could not understand.

“A poet comes to our island,” he explained, “and stays for a year, and then he goes away and writes a book about us. All the time we thought he was just looking into the sea. But in fact he was gathering information like a detective. He was licking it off the ground.”

A big wave bumped into us. The motor persisted at a high whine. We went through the wave and the sun bore down on the bronze arm of my captain and his mighty fist held the tiller motionless.

“And he never returned,” the ferryman said. As he watched the seagulls overhead, like they too were his enemy. I was wishing I had not come.

“If I ever saw that poet again,” the ferryman said, “and if he was looking for a ferry to the island, I would gladly take him on board.”  He smiled and I noticed he had fine white teeth.

“Oh indeed,” he said, “I would take him on board, but he would never reach the island.”

Until the boat was berthed by the rubber tyres that hung from the pier wall. Then the ferryman’s attention turned to me again. As if he was considering what I might be up to in his private kingdom.

“What do you do, yourself?” he wondered.

“I’m a teacher,” I replied without hesitation. But he had probably deduced much more than that, even before I stepped into his boat.

“The poet that was here,” he said, “never came back. So you won’t find him now. But his woman is here all the time. She’s a very nice lady. She lives in the house just beyond the Co-op.”

And so I knocked on her door instead. And as regards learning how to write, it was one of the best things I ever did. Because I began listening to what she described as “her side of the story”.

Coronavirus anxiety keeping you awake? Here’s how to get more sleep
10