Would you whisht till we hear the weather forecast? 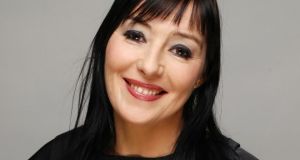 ‘Jean Byrne is donning her Sisters of Mercy concert-going garb. A nation holds its breath as the sponsor message plays out’

There is little I like more than sitting down to watch the weather forecast. Not just any old weather: the one true forecast is the weather bulletin after the Six One or the Nine O’Clock news on RTÉ1. It is best served with lashings of slightly-too-hot tea and a biscuit, and with a dog resting its moist snout on your lap.

The weather bulletin is like one big security blanket for the nation. Irish people comfort themselves with it as they bed down on couches and bean bags up and down the land, and around the world, bitter about their past yet strangely confident about their future, even if it’s raining.

The RTÉ weather is one of those things that binds us together as a people. Like cheese and onion Tayto; the Glenroe feeling on a Sunday night; a cup of tea in a crisis; voting for politicians, who we then loathe for five years, before voting them in again; bringing our children for ceremonies in churches run by an institution we say we hate; driving in the fast lane of motorways at 60km per hour, and slowing down when somebody objects; emigration; blaming the English for everything but loving their royal family; eating lasagne with chips; and putting on open-top buses to celebrate mediocrity.

In a daily ceremony, Bryan “Dobbo” Dobson presides over the Holy Meteorological Orders like a high priest. He shuffles his pieces of paper and chats to the sports presenter as the lights go dark. Jean Byrne is donning her Sisters of Mercy concert-going garb or Gerry Murphy is brushing up on that lovely accent of his. A nation holds its breath as the sponsor message plays out. The anticipation is palpable across the land.

But good things only come to those who wait. Pass another Marietta to dip in the tae. The RTÉ weather forecast must always start with a little summary of weather that has already happened.

“Good evening. Just in case you have been stuck in a dark cave, it was raining a little bit today, particularly in the west as usual, and it was windy in Cork. At about 2pm there was a clap of thunder in Termonfeckin and a gust of wind reaching 40 knots was recorded in Gortnahoe.

“Now back to tonight.” Why thank you.

This is the “here’s what I’m about to tell you” bit. As if to heighten the expectation, Met Éireann presenters will loosen you up with a phrase. Things are set to “remain changeable” in the coming days (translation: anything could happen), it will “turn increasingly wintry” (a phrase usually used during the, er, winter) or – and this is a personal favourite – milder conditions will be “setting in”, like some sort of pestilence.

“Now back to tonight.” Come on, come on, what’s going to happen? “And looking to tomorrow” (do it, already), and this is the actual forecast, “it will be rainy, windy, sunny, moony like the last 300 centuries on this godforsaken, debt-ridden, drink-sodden, moss pile we love to love.

When there really is weather to report – a centimetre of snow that might bring the country to a standstill or a heatwave that might allow class outside – the weather bulletin is extra good. Weather forecast fans hold out for these special days.

My grandmother was a fan. She would religiously watch the weather after the News at One, Six One and Nine O’Clock News bulletins and would often bark her catchphrase “whisht till we hear the weather” just before it started.

She only really ever got annoyed if somebody got in the way of the forecast. The funny thing is she didn’t drive and rarely went walking, but missing the weather would be akin to leaving the front door unlocked at night or missing Mass on a Sunday. She just wouldn’t have felt the same. I’m with her on that.

I remember the forecasts over the years, when they stuck weather symbols on a magnetic map or when Ger Fleming would wink at Ireland as he sat behind a desk and pointed at a grey portable television.

It is all so modern these days and, yes, our Met Éireann friends have also moved with the times. But they are true to the quirky and inimitable style that makes them quintessentially a part of us.

So to hell with the pretenders, the babes on other channels, the 10-day forecasts with snow depth in millimetres, percentage humidity updated by the second from Düsseldorf.

Give me Met Éireann any day, with their talk of “deep frontal troughs tracking northwesterly” and “bands of showers pushing into Sligo, fresher conditions setting into the south and becoming widespread”.

We love you; don’t ever change.