With her voice and a country star to guide her, Andrea Begley’s on the path to fame 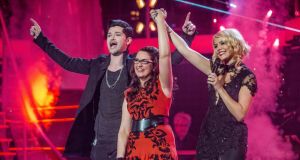 Moment of victory: Andrea Begley with Danny O’Donoghue of The Script, her coach, and Holly Willoughby, one of the presenters. Photograph: Guy Levy/BBC

Andrea Begley, the Co Tyrone singer who won the BBC’s The Voice UK last weekend, is different in person from how she appeared on screen. On television she often came across as a typical product of the talent-show industry: sweet and naive, with pretty dresses, pretty ballads and a pretty voice.

The TV show’s portrayal of Begley’s physical disability – she has only 10 per cent vision after childhood glaucoma – added to the image of a vulnerable young woman in a ruthless industry. She was chaperoned on and off the stage and carefully positioned by crew members to face the cameras.

In conversation she’s intelligent, articulate and self-possessed. She is 26, a law graduate, and has just finished a master’s degree. She works in the North’s devolved Department of Health.

For now, though, she is determined to make the most of the opportunity that winning a recording contract with Universal Music Group offers. “It’s always been my dream to make a career out of music, but I never thought I would get the chance,” she says. “This is the big break I’ve been hoping for. I’m going to grab it with both hands.”

She is leaving the day job, clearing out her Belfast apartment and moving to London. She’s already in talks with Universal about her debut album, which she hopes will incorporate some of her original material as well as the kind of popular covers – Eva Cassidy, Sarah McLachlan – that won her the public vote on The Voice UK.

She wants as much creative control as possible, but she talks with a lawyer’s pragmatism. “I like to speak my mind, and I expect to be listened to,” she says, “but I’m also prepared to compromise and to listen to people with a lot more experience.”

One of the people she’ll be taking soundings from is her aunt Philomena Begley, the country-and-western singer, whom Andrea describes as a huge influence.

“She’s been 50 years in the industry, and she’s still working,” she says. “I think part of her success is that she never let the fame go to her head. She was always there, at family parties and weddings. We’ve shared a stage a few times, and she’s been incredibly supportive of me.”

The young Andrea also gained experience through the trad scene around her home town of Pomeroy, Co Tyrone, competing in fleadhs and Scór na nÓg. “I’m still a big fan of Irish folk,” she says. “One of my favourite artists is Cara Dillon. When I won The Voice I got a congratulatory tweet from her. I was well pleased.”

Much has been made of Begley’s disability and the comment by Danny O’Donoghue, the singer with The Script, who was her coach on The Voice UK, that she was an inspiration. Some suggested this was a patronising, old-fashioned attitude.

Begley takes it all with a pinch of salt. She’s a trustee of the Royal National Institute for the Blind, but you get a sense she’s not interested in being a mouthpiece for disability rights. She talks with down-to-earth clarity about the obstacles she has faced and surmounted.

The daughter of Ann, a nurse, and Kieran, a shop-owner, she has been losing her sight gradually since the age of five, when she was diagnosed with juvenile arthritis, a rare autoimmune disorder that can lead to glaucoma.

By her midteens she could no longer read large print or get about on her own. Despite her worsening condition she stayed in mainstream education and, at 16, had software installed on her laptop that could turn written information into speech. It enabled her to study for her A levels and go to university.

It was also the source of some teenage giggles. “The electronic voice is quite robotic, and it took a while to get used to,” she says. “We used to type in curse words, just to hear it say them back. It was hilarious.”

These days she relies on friends, her new boyfriend, Seamus, and her two younger sisters, Hannah and Lucy, to help her get around. She doesn’t use a guide dog but carries a white stick.

“Mostly,” she says, with characteristic good humour, “I just grab a hold of anyone who’ll have me.”