Why Bob Geldof’s Primark moment was a Rat Trap 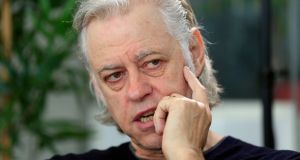 Bob Geldof, who criticised revellers for wearing Primark clothes as he unleashed an expletive-filled tirade at at Brentwood Festival on Sunday. Photograph: Jonathan Brady/PA Wire

The bad man used the ‘F-word’ at a rock and roll festival and people needed counselling.

Or so it seemed, judging by the Victorian Maiden Aunt reaction to Bob Geldof telling a festival audience in England that they were “boring and tame” and criticising them for “wearing wall-to-wall fucking Primark”.

His crime then was, as he remembers himself, “the denunciation of Provo nationalism, Medieval-minded clerics and corrupt politicians”.

Now, Geldof is not a civil servant, he’s not a community outreach worker - he’s a 64-year-old man revisiting his punk rock roots as he drags the arthritic bones of the bus pass Boomtown Rats around the festival circuit. You don’t go to a rock gig to expect to hear pleasantries and have the lead singer tell you how elegantly dressed you are.

Geldof’s always been the motormouth contrarian, a Victor Meldrew with a south Dublin accent who has never met an argument he didn’t like.

His musical mission statement in Dublin in 1977 was simply ” ‘fuck all that diddly-eyedly stuff’”.

He stole Mick Jagger’s stage persona, updated it for a Sex Pistols/Clash generation and had the impudent cheek to tell Gay Byrne that he “rejected the cosy de Valera consensus of Church and State”.

The Rats were banned from many an Irish venue; questions were asked about them in the Dáil and their first ever promotional poster - featuring just a pair of long, sexy legs - drew ire from Ireland’s feminist movement. Until Geldof pointed out that the legs belonged to him.

Even as a young schoolboy, the Special Branch took an interest in him. He told me once about how his father was summoned to his school, Blackrock College, because teachers had found out had imported copies of Chairman Mao’s Little Red Book from China and was distributing them around the school. “Rock got the Branch in because I was importing Communist literature into 1960’s Ireland” he remembers.

He understands people either view him as Saint Bob or Sad Bob due to either his Live Aid work or his tragic personal life (he lost both his wife, Paula Yates and his daughter, Peaches, to accidental heroin overdoses). As he puts it himself “I hate being Mr Fucking Save The Universe, I’m a rock and roll singer”.

An irascible as the day is long, his most recent pronouncements on the country in which it is still sometimes suggested he runs for the Presidency, are that “the complicity, the incompetence, the venality in Ireland” started politically with Haughey, with the redesignation of land and the (alleged) running of guns to abet murderers. “There was a compact between the merchant class, the bankers and the politicians that led to the boom and then the bust,” he said in an interview from a few years back.

He’s not an “on the other hand” type of speaker. He talks in passionate polemics — his party trick is to go into a detailed rant about how Margaret Thatcher was the original punk rocker.

With tickets to shift for the remainder of this Boomtown Rats tour (including a date in Dublin in August) he will be thrilled with the s new round of condemnation.

He will have noted the sweet irony of how the offence taken by today’s hip, young gunslingers is neither qualitatively or quantitatively different from that of how the deeply conservative clerical and political establishment in this country reacted to him 40 years ago.

He’s pulled this stunt about his audience’s sartorial standards before. At a show last year in Blackpool, he loudly noted how he had gone to the trouble to wear a pretend snake skin suit but “you lot are dressed in a uniform of black T-shirts with shit band names written across the front”.

The main complaint about his remarks in Brentwood is that as a multi-millionaire (he’s valued at some €150 million, due to his non-music business activities) he was talking down to the audience for wearing affordable high street clothing.

Licence to say what he likes

But he’s in the entertainment business. He’s Bobby Boomtown up there on the stage, the frontman of a rock ‘n’ roll band and has the licence to say or do what he likes. Instead of getting all tight-lipped and disapproving, surely it was behoven of a rock ‘n’ roll audience to draw attention to the fact this his crappy snake skin suit made him look like a cheap spiv, that his untamed greying locks were not up to There Is No Place Like Essex scratch and that the auld lad shouldn’t move around too much on stage in case he put his back out.

There was also the irony of people sanctimoniously taking offence at off-the-cuff remarks about a shop that most of them wouldn’t be seen in dead in anyway. You don’t see that much Primark clothing on South William Street.

It’s all a bit reminiscent of the time when Yusuf Islam, the artist formerly known as Cat Stevens, played a show at the then Point Depot in 2009. The audience grew restive as the singer sang newer work and ignored his classic hits. A shout went out from the expensive seats: “Play Peace Train, you fuckin’ bastard”.

Geldof’s Brentwood moment was a Rat Trap. A pathetic reminder of how we like nothing more to luxuriously bathe in the waters of petty resentment and joyless po-faced begrudgery. A past his sale date singer caused offence by making a cheap joke at a rock gig.

We should also note that his hair is too long, he can’t sing properly and all his songs sound the same.