‘What to do about the man on the train sucking a chicken leg?’

Coping: Many philosophers stress the importance of seeing people as individuals, not stereotypes but it’s hard 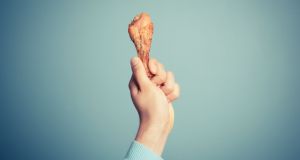 Is sucking on a chicken leg while travelling on a train pushing the benefit of the doubt too far?

I’ve been in the UK for two days. I’ve visited many times before, of course, but these are my first two days as a resident. It’s odd, because Ireland is so close that I feel I can almost catch the Celtic cynicism and the smell of rain wafting on the acrid breeze inside Euston Station in London.

I’m staring up at the notice board to see where my train will leave from, and a woman with a suspiciously outdated hairstyle shouts “Exkyooz May!” rather rudely at me as she shoves past. I’m reminded that you can never know what someone might be experiencing when you cross paths with them, and to be more tolerant. I briefly wish someone had sent her that memo.

Across the way, a large man roars ferally at a school tour group of small children marching two-by-two in their little high vis vests. He’s justified in telling these tiny persons – barely out the other side of infancy – to get out of his effing way. Because he’s late for work. So these children need to get the eff out of his effing way.

I’m not in Dublin any more. Last week, I was on a bus in Dublin when a respectable looking but very intoxicated man started shouting at a young man who was chatting politely with his friend. The drunk noticed the young man’s English accent, and proceeded to slurringly roar his objections to several hundred years of British occupation at the baffled and rather frightened young fellow. The bus driver stopped the bus and told the abusive old fart to get off.

“You won’t talk to anyone like that on this bus,”, he said. “You’re making us all look like uncivilised racists in front of that young fella.” For his valiance, the bus driver was called “a West Brit c**t” by the drunk through the closing doors. I thanked the driver with extra gusto when I got off at a later stop.

As he removes them from the plastic, he turns to the immaculately dressed young woman beside him, and intones “Really Benjamina, I’m getting sick and tired of buying new plastic wine glasses every time we drink Prosecco on the train.”

A piece of my ham sandwich flies elegantly from my open maw, accompanied by an almost bovine sort of throaty noise. No, I’m certainly not in Dublin any more.

The train is making me queasy – it might be because Prosecco Guy is mincing his way through a whole cooked chicken, again from M&S (sorry guys, I love your chocolate covered pretzels). His little nibbles remind me of some sort of homely little hedgerow type rodent, and I feel guilty.

They probably have families. Prosecco Guy has Benjamina, though she seems lukewarm about him.

Perhaps today is the worst day of their lives. Perhaps they’re not always like that. Perhaps they’ve just landed here from another place, as I have, or maybe someone they love is sick, and on and on. I’ll strive to give people the benefit of the doubt. I don’t know if I can manage it with Prosecco Guy, though. He’s sucking on a chicken leg.