Our Wedding Story: A solar eclipse of the heart 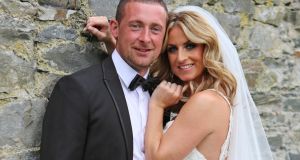 Jean and Alan,who live in Drogheda, Co Louth, met 17 years ago on a night out.

Jean, who runs her own hair salon, is also co-owner with Alan of Ladies First low calorie cocktails.

During the solar eclipse on March 20th, 2015, Alan proposed and the couple married in front of 200 of their loved ones on July 31st, 2016 in a spiritualist ceremony in Bellingham Castle, Co Louth.

As the bride’s parents had passed away when she was younger, she was given away by her 13-year-old nephew Thomas.

“My favourite part of the day was when Thomas was giving me away (and of course saying, ‘I do!’)”, says Jean. “I looked up to the sky and thanked my mam and dad for everything, and as I walked down the aisle the sun shone down on me – it was a beautiful moment.”

Jean and Alan, whose parents are Bernie and Nicholas Johnson, were accompanied by bridesmaid Jennifer Laclie and best man Brian Holcroft.

“We loved planning our wedding,” says Jean. “There was no fuss – it was our day so we did exactly what we wanted. We had four bands – Rapscallion, Manila Strings, The Seducers and then Aslan came on at 2am, it was pure magic.”

The newlyweds, who had their first dance to All of Me by John Legend, honeymooned in Marbella. They say life has changed little for them since marrying. “It has been no different. Myself and Alan have always been so grateful and feel so blessed for everyone and everything we have in our life.”