‘We were really both miserable at leaving Ireland’ 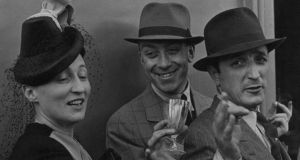 Yvonne and Louis Jammet, then owner of Jammet’s restaurant in Dublin, with AJ Con Leventhal (centre) in 1932. Jackie Bouvier and her stepbrother “Yusha” Auchincloss were brought to the restaurant by Fr Joseph Leonard in 1950. Photograph: Róisín Hood/Jammet’s

In the very first letter, Jacqueline wrote to Fr Leonard in August 1950 from Scotland where she – and her stepbrother Yusha (Hugh Dudley Auchincloss III) – had gone after their visit to Dublin.

She said: “You gave us such a lovely time in Ireland – I can’t really describe what I want to say – but all the other places I’ve travelled to have become a blur and I have to think hard to bring back the memories of things I saw and people I met and places I ate – but with Ireland every second has remained clear and I can remember it down to the last word of every conversation – and because that doesn’t sound very important , I think it is – because it was all because of you, and the way you made the place live for us and the immense kindness you offered us. I have always been glad to move on before, but we were really both miserable at leaving Ireland and though we are having a lovely trip, we are still homesick for it.”

She recalled dining at Jammet’s, Dublin’s leading restaurant, and “delicious dinners at Raheny!” where she had met friends of Fr Leonard, including members of the Fitzgerald, Kennedy [no relations to her future family] and Doyle families.

She thanked Fr Leonard who had supplied her and Yusha with “endless boxes of candy and cigarettes and books and pictures and postcards and pencils and poems and lunches and teas” in Dublin.

Although she and Yusha were enjoying Scotland and “the Edinburgh Tattoo with the most wonderful highland dancing and lovely swaggering Scotchmen bag-piping up and down the esplanade”, she wrote: “I miss the green of Ireland and the quick rains – and the wonderful friendliness of everyone you meet”.

She said “I will write you again on the boat going home”. The correspondence continued until Fr Leonard’s death 14 years later. She ended this first letter with the words: “Love Jacqueline who really isn’t a Girouette.” Apparently Fr Leonard had used the French word (meaning a weather-vane, also an informal term to describe a fickle person) to describe her. Jacqueline took the name with good humour and grace and the term girouette crops up in some future correspondence.