‘We didn’t come to Ireland to claim benefits. That would be an embarrassment’

New To The Parish: Izzeddeen Alkarajeh arrived in 2016 from the West Bank via Saudi Arabia 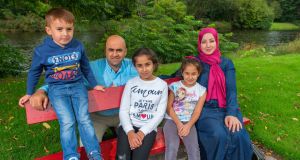 Izzeddeen and Eman Alkarajeh with their children Omar, Jouri and Lama. Izzeddeen, a Palestinian from the west bank who moved here from Saudi Arabia with his wife and children last year and is living in direct provision in Cork. Photograph: Michael Mac Sweeney/Provision

Izzeddeen Alkarajeh had been living and working in Saudi Arabia for nearly 17 years when he lost his job. He knew his Jordanian wife, who he met during his time in Saudi Arabia, would be unable return to his home in the West Bank due to a ban on family reunification applications. Suddenly the couple and their four young children were faced with the harsh reality of being separated from their loved ones.

“Since my stay in Saudi Arabia was based on a work permit, staying with my wife and four kids had become totally dependent on how long this work permit could last. If my residence was terminated I would have to take my children to Palestine and leave their mother in Jordan. It was a scary scenario that used to horrify my children and their mother.”

Alkarajeh grew up in the city of Halhul in the Hebron province in the West Bank. He remembers the clashes between Israeli soldiers and Palestinians as he walked to and from school during the first intifada. “I was born under occupation. I was used to seeing clashes, tensions, aggressions and all sorts of problems that can be caused by foreign occupation. Bullets and gas bombs used to hit our home. The people who died, anyone of us could be one of them.”

He studied computer science in Jerusalem but struggled to find employment in IT following graduation. “In the West Bank we didn’t have large IT companies and the only opportunity was to go the ministry of education and apply for a job as a teacher.” Alkarajeh decided to apply for work abroad and in 1999, aged 23, he was offered a tech position in the city of Dammam in Saudi Arabia.

Two years later, while on holiday in Jordan, he met and fell in love with Eman Aburabi. The following year the couple were married and went on to have four children.

“We realised that Saudi Arabia wasn’t a good place to raise our children so I lodged a family reunion application while I was in Palestine for a vacation. I wanted my children to grow up there and resist any attempt to convert us into refugees once again. We are the indigenous people who lived on that land before the establishment of Israel. This is something political we believe in.”

Alkarajeh knew that his wife and children’s residency depended on his employment and was worried about the impact of the recession in oil prices on his job prospects. Without the possibility of moving home to the West Bank, Alkarajeh turned to Canada where he began researching the visa process for skilled workers. He travelled to Canada in 2013 to sit an English exam and presented his documents for consideration under the Canadian immigration system. When it became apparent the Canadian Government was looking for younger skilled workers, Alkarajeh travelled to Nova Scotia to visit recruiters. “I didn’t give up trying to emigrate to Canada because I thought it’s an option that maintains the dignity of my family and would help us avoid the problems of seeking asylum.”

He returned to Saudi Arabia determined to find a route to north America. However, in early 2016 his work team received news that the company was terminating their contracts. With the end of his employment fast approaching, Alkarajeh turned to Europe and began researching asylum procedures in Ireland. “Since my children had done all of their education in English speaking schools, I believed our options must be limited to the UK and Ireland. I thought Ireland would be more sympathetic to us as Palestinians.”

Alkarajeh planned to travel to Dublin with his family, rent an apartment for a couple of months and lodge their asylum application. He did not come across any reference to the direct provision system in his research.

The family arrived in Ireland in September 2016 and after a couple days they applied for asylum. “It seems I had spent months reading about the legalities but never thought of reading about the asylum process itself.” The family was given the option of supporting themselves financially for the duration of the asylum process, which they were told could take years, or moving into a direct provision centre.

“Saudi Arabia was no longer an option because we’d sold our furniture, our car and we’d left our apartment. We had no funds there. I also couldn’t afford to be waiting for years independently so we decided to accept direct provision.”

The family spent a month in the Balseskin centre before being transferred to the Kinsale Road hostel in Cork. A week after their arrival the centre opened a new kitchen where residents could cook their own food.

After 17 years professional work in Saudi Arabia, Alkarajeh was eager to keep mentally active and immediately signed up to the Cork Volunteer centre. He now provides website development and administration support to a charity in Cork while also volunteering for the Google Maps local guides programme where he updates, validates and builds street view virtual tours around the city.

“I have tried to fill every moment of my time exploring the country and giving back to the community to avoid feeling down or a burden. We came to Ireland not to rely on social welfare or claim benefits. That would be an embarrassment for us. We didn’t want to rely on anybody.”

Alkarajeh’s eldest daughter has completed first year of secondary school in Cork and his two younger daughters attend a local primary school. The youngest boy stays in the centre with his mother who passes the time perfecting her artistic skills as a cake decorator. “In Saudi Arabia she was not allowed to work so the only thing she could do all those years was develop her skills in food processing.”

Alkarajeh is optimistic about the outcome of his asylum application and looks forward to applying for work as soon as his papers come through. “At the end of the day we have a genuine case based on the Geneva Convention and international human rights laws. It was a cultural shock when we arrived but gradually we started learning that this is an open country, a free country. If this country decides to protect us then we should give back this respect.”