Vincent Browne: ‘I don’t look back at all’

Vincent Browne, the ‘Irish Times’ columnist, TV presenter and former newspaper and magazine editor, is 70 this year. He remains irritated by politicians, dissatisfied with everything he does, and exasperated by most of Ireland’s media 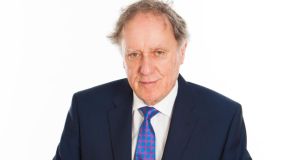 Vincent Browne is very relaxed these days. The Tonight with Vincent Browne programme goes on air at 11pm, when he welcomes viewers, gives a brief summary of the show, then hands over to the TV3 newsroom for headlines.

At 10.45pm he is still at his desk in the large communal production office.

At 10.57pm his guests for the evening are in the studio, having their microphones attached.

In the director’s box they are calling “One minute.”

Someone in the box says, quite reasonably, “Where’s Vincent?”

Someone else says, in a public-relations voice: “I’m sure he’s outside, doing a bit of research.”

It is left to the newsreader, Stephen Murphy, to say “Good evening and welcome.”

The headlines roll on. The newsreader is saying “And finally for now . . .”

The studio clock is showing 23.03.54 in red digits when Vincent Browne takes his seat on set and delivers his wintery smile.

Several times during the programme he plugs a new version of the show, which will start next Wednesday. The People’s Debate With Vincent Browne will air once a month, at the earlier time of 10pm, for two hours, and will consist of an audience of about 200 people – “ordinary or, rather, extraordinary people” as he puts it – and Vincent Browne. “We’re calling it democracy television,” he says, without a blush.

TV3 staff say the dry run of the new format was most encouraging, with Browne performing extraordinarily well.

Some people are calling this his break from the nuisance of having a panel of guests. He denies this, but he does say: “If there’s a panel, they suck up half the time.”

“But also, on behalf of the viewers,” he says. “You ask them something and they just rabbit on and on and you ask them again . . . Unfortunately, some RTÉ programmes allow people to talk down the clock. And I need them to get to the point.”

He has thought of offering panellists guidelines, to help them out. They would be stark. “If you’re asked a question, answer it straight away. If you want to provide context, do it afterwards.”

Perhaps he is calm these days because he is comfortable working with a team of just three people: the producers, Betty Purcell and Lisa-Marie Berry, and the researcher, Daniel Murray.

For those of us who worked with Browne in previous incarnations (as editor of the now-defunct Sunday Tribune , he recruited me in the early 1990s, and was my boss until he left in 1994), and observed his regular lava flows of anger, watching Tonight With Vincent Browne will never be a stress-free experience.

“No one has ever said that to me before,” he says evenly when told how awful the editorial meetings at the Tribune were. “Or, rather, if they did, I have forgotten.” It seems all that is left of those terrifying rages are a few pebbles of irritation.

As an interviewee, Browne is modest and courteous. He is enthusiastic about Mario Rosenstock’s imitation of him, which periodically depicts him as Satan, saying, “I don’t care.” At the first meeting with him, he says, Rosenstock imitated a regular panellist, the economist Constantin Gurdgiev. “It was just so funny.”

Tonight With Vincent Browne tries hard to find new panellists. And particularly new women panellists, of whom the latest success is Francesca Comyn, Newstalk’s court reporter, who was talking about the Anglo Irish Bank case. “She was excellent,” he says. “It’s great to find someone like that. Any time you find a woman that great, it’s so good.”

But it’s also a matter of trying to vary the view. He believes “RTÉ has the same people, with the same agenda, on Saturdays and Sundays. They’ve all bought in to the neoliberal agenda,” in his view.

Things are more conservative now than when he was young, he says. He will turn 70 in July. “It’s worse. There was a time when we thought we could generate our own jobs back then.”

In his own profession, he says, “It is unhealthy that a large part of the media is owned by one man.” Everywhere, the debate has been flattened, he says. “There’s no difference between the Independent and RTÉ. Independent Newspapers might be slightly to the left of RTÉ.”

And then the media itself is in such trouble, with less money available for investigative journalism. “I thought it might be a good idea to try a new model.” He had thought that, when the Sunday Business Post was in financial difficulty last year, it might be have been saved by members of the public, who would pay €100 a share and elect a board. In the end he decided that the Sunday Business Post was too much of a niche publication for this to work. But he thinks about these things.

He works happily at TV3, the most commercial and minimalist of Irish stations. “There’s no interference here. They don’t have a hand-wringing committee to discuss which insult to the establishment has been perpetrated the night before.”

He has been very lucky to have been given this television opportunity, he says. But he finds print journalism more satisfying. He likes writing his column, which appears on Wednesdays in The Irish Times , and says it works best if he starts it on Sundays.

That way he has time to throw the whole thing out and start again, if he wants to. “There’s a satisfaction to that.”

He’s planning a few columns about gambling. “It’s so cynical.” And he’s not too fond of the National Lottery. I suggest it’s patronising of him to tell people what not to do with their money. “Well, maybe,” he says. “But it’s not patronising to say that the State shouldn’t be involved in it.”

Does he gamble himself? “Do I bet on horses? No. Do I play cards? No. But I gambled on Village ,” he says, referring to the current-affairs magazine he founded in 2004 and edited until 2008; it is now published bimonthly with no involvement from Browne.

“I thought I knew about magazine publishing . . . I thought, I’ll have an outlet until I fall off the perch. Unfortunately, I fell off the perch . . . Ha!”

I wonder whether he has any regrets, looking back on his career, littered as it is with good ideas such as Magill , the Sunday Tribune and Village .

“I don’t look back on my career much at all,” he says. It’s a surprising thing to say when you think of all the tears that were shed, mostly by other men, during that career, and how sorely missed those media outlets are. I ask who his dream editor would be. Would it be himself? He replies: “I wouldn’t be my own dream editor, in fact. No. Nor did I ever enjoy being editor. I enjoyed writing.”

He was getting what he wanted out of journalism with Magill magazine, he says. “The Sunday Tribune experience, on the whole, was not a happy one.” He made a mistake, he says, in holding on to Magill when he started the Tribune . “I should have given [the new Magill staff] the magazine and got out altogether.’”

“I’ve found this out about myself. I’m always dissatisfied with anything I do. I think it’s not good enough . . . And my disappointment with myself comes across as disappointment and the chastisement of others. But in principle you’re blaming yourself. I blame my mother.”

He laughs at the last part of this. Indeed his mother – he was her second child and eldest son – set the bar pretty high. After he did well in his Inter Cert, she said: “You nearly didn’t get honours in French.” “My reaction was not anger but amusement.”

He won’t say anything negative about his mother. “All Irish fellas love the mammy. I certainly did.” She died in 1987. His father died in 1992. “ I still miss them.” Every now and then he thinks, She’ll be so glad when she hears that.

Anger, he says, has never been a factor in his life outside work. “I have never been angry with my daughters, for example.” He says he has to pretend to be angry with them, for parenting purposes, but you cannot imagine that he would be very good at pretending anything.

Emma is 32, a barrister and a mother. He shows me a photograph of his baby granddaughter. Julia is 23. She studied archaeology. “She’s not allowed to leave home until she’s 47.” He laughs benignly. Then he walks away to the quiet production office.