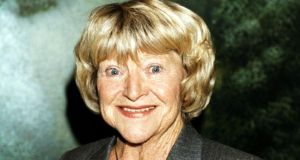 The actor and comedian Dora Bryan, who has died aged 91, was perhaps best known for her role as Ros Utterthwaite in the sitcom Last Of The Summer Wine but her 50-year career also embraced parts in classic British movies like A Taste Of Honey and myriad comic parts on television, film and stage.

Her friend and manager David Hill, who confirmed her death, said: “She was razor sharp with an incredible brain. You were always aware when you were with her that she had been a big star. Dora was very quick-witted and very funny.”

She was born Dora May Broadbent in Southport, Lancashire, in 1923 and brought up in a village near Oldham. Her father, Albert Broadbent, owned a small mill that went bankrupt, forcing him to sell bobbins from door to door, sometimes taking Dora with him. Her mother, Georgina (nee Hill) encouraged her to perform in public.

She saw her family background as happy, but was attracted by the potential extra attention that acting offered.

Entertained the troops The first live show she saw, Peter Pan, gave her the urge to play Peter. After seeing Ingrid Bergman in Intermezzo, she spoke with a Swedish accent until an adored elder brother told her not to be so silly.

After the London Academy of Music and Manchester Repertory School, she joined Oldham Rep as an assistant stage manager.

During the second world war she travelled to Italy with the Entertainments National Service Association to entertain the troops.

She went to London to seek her stage fortune and got her first big chance when she replaced a sick cast member in a London production of the celebrated thriller Gaslight. The Fallen Idol provided her first film role. She was encouraged to change her original surname of Broadbent by Noel Coward while working in a production of Private Lives.

While in Emlyn Williams’s play Accolade (1950), she entertained him offstage with some of her comedy routines: he invited her to one of his big parties, at which impresario Binkie Beaumont was present. She quickly became the star of The Lyric Revue. It took 14 curtains on the opening night and ran for two years.

By the time she was 37, Bryan had appeared in 28 films without ever having her name above the title. This improved after Shelagh Delaney’s A Taste of Honey, in which she played the harridan mother, unsympathetic to the heroine, Rita Tushingham’s, emotional injuries.

She took on dozens of other role, appearing on radio in Hancock’s Half Hour, in popular TV shows, cinematic hits such as The Blue Lamp and The Great St Trinian’s Train Robbery and on stage, where in 1995 she earned an Olivier award for best supporting actress for her performance in Harold Pinter’s The Birthday Party.

For a time Bryan was prone to depressive interludes. By the end of the 1970s she was attending Alcoholics Anonymous and pledging herself to Christ at the behest of Cliff Richard, who starred with her in a Billy Graham film production.

However, Bryan was a great survivor and her later years were some of the most productive of her career. In 1996 she was appointed OBE.

In 1963 her single All I Want For Christmas Is a Beatle was voted Best Bad Record on Top of the Pops. She was delighted. In her 70s, she was proud that she could still do the splits.

Her husband, Bill Lawton, and her daughter, Georgina, predeceased her. She is survived by her sons, Daniel and William.