TCD students living on campus are irate over the noise caused by the Luas works outside their apartments in Dublin city centre, particularly during the early hours of the morning. Video: Jack Power 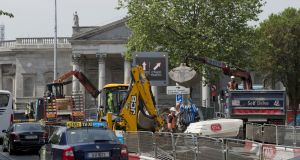 Luas works at Trinity: why refusing to have any sympathy with someone because of their background is sheer bigotry. Photograph: Brenda Fitzsimons

Imagine we sat down to have a cup of tea together, and I made a number of statements that were tantamount to saying the following: “Working class people don’t deserve our sympathy”. You might be shocked. You might become angry. Both would be justified. What if I were to say: “Working class people deserve our sympathy”. Hopefully, this statement would annoy you too. Who is the “our” this sympathy belongs to? Isn’t it patronising and presumptuous to judge such an enormous group of distinct individuals so rudely as to walk around with a vague sense of pity or concern? It might make sense to say “young people in disadvantaged schools deserve our sympathy” or “a convicted paedophile from a poor background doesn’t necessarily deserve our sympathy simply because his upbringing was difficult”. These are slightly more nuanced ideas which don’t commit the crime of generalising.

Now imagine a similar, but materially different statement. We sit down over tea, and I say: “Trinity students don’t deserve our sympathy”.  Does this sit more comfortably with you? It shouldn’t.

During last week, there were some news stories about the fact that the Luas night works outside Trinity College in central Dublin were disturbing the students during study for final exams, with the works sometimes going on until six o’ clock in the morning and preventing the residents from sleeping. The head of the students’ union was attempting to negotiate a pause in works during the exam period to facilitate resident students.

When I met a few friends for a drink and the topic of the students and their noise pollution problem came up, one of the group – a friend of a friend – surprised me with his vitriolic response. Like me, he comes from a poorer background, and said he was disgusted by the entitlement of these “rich kids”, as he called them, who seemed to expect important improvements to infrastructure to stop just so that they, “pampered and privileged” as they are, could sit their exams.

I was surprised to find some variation of this intolerant attitude reflected almost everywhere else I looked. When I pointed out to my friend that many people from poorer backgrounds work very hard to get into Trinity, myself included, his response shocked me even more.

“Yeah, I know some good people come through there.” The implication here was heavy and wildly wrong – that to be “good”, you needed to have suffered in the specific ways associated with being working class. One cannot be “good”, and born into wealth. He followed this statement with one I hear a lot – “It’s fine to insult wealthy and powerful people anyway – these kids will be in charge in a few years.”

Many students feel a crippling weight of pressure to make good on their parents’ investment of love, support and or money

His outlook was wholly without sympathy, as though this exercise in human caring should be reserved only for people within one’s own demographic or those less fortunate. This defeats the purpose of being sympathetic entirely.

The truth is that most young people have almost nothing at all of their own – what they do have is usually subject to the will or means of their parents. They are precisely as rich or poor as their parents are, through no fault of their own. My acquaintance’s comments – and others I’ve seen – savoured of bitterness. As a group in the abstract, comparatively lucky young people at Trinity College may seem less in need of our sympathy than most, but refusing point blank to see anything worth sympathising with in someone simply because of the background they were born into is sheer bigotry.

Having been lucky enough to live inside Trinity, I know that many of the students granted rooms there have mental health issues or physical disabilities. Many students feel a crippling weight of pressure to make good on their parents’ investment of love, support and or money. As a final year undergraduate taking exams at Trinity, burned out, working two minimum-wage jobs and feeling the weight of my family’s pride and pressure, I knew that I needed to do well in those exams to get ahead in life and take care of my mother.

Elon Musk: Grimes and I have this debate of ‘Are you more crazy than me?’
4

My daughter is stealing, hoarding food and secret eating
9